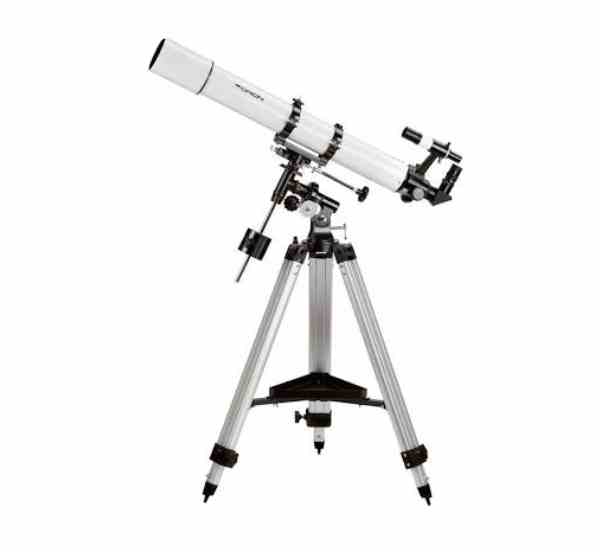 How Do The AstroView 90mm’s Optics Work?

The optics used within the tube of the AstroView 90mm is an achromatic refractor lens. If you don’t know, the refractor design is the oldest optical design found within telescopes and is also one of 3 other core telescope optics, the other 2 being reflector and compound optics.

In this section of the review I’ll be going over the pros and cons of the achromatic lens found within the AstroView 90mm so, if you want a bit more detail on the other 2 variations, click here to read and article that we’ve written on the subject.

Now regarding the pros of the achromatic lens found within the AstroView 90mm, they include :

The cons of that the achromatic lens include the following :

The optics within this telescope are actually pretty decent and the AstroView 90mm generally does have better optics when compared to other some similarly priced refractor counterparts, to some extent but, it also does suffer from much weaker power than other similarly priced reflectors and even refractor systems.

Nevertheless, as whole and as a system made for beginners, the optical performance the AstroView 90mm issues is still relatively good.

What Do The AstroView 90mm’s Specifications Mean?

The AstroView 90mm specs are kind of a mixed bag for the roughly $250 but the quality of the achromatic lens that it uses is well above other more powerful 4 inch devices within its price range. Anyhow the aperture of the device is 90mm, the focal length is 910mm resulting in very narrow focal ratio of f/10.1.

These specs mean the AstroView will be able to magnify upto 180x at its peak power and due to the bigger focal ratio of f/10.1, it’s a device best suited for planetary viewing provided you can achieve the systems max power. But, in general it’s not the most powerful of devices and won’t really allow you to observe very detail images of celestial objects especially when compared to 6 inch telescopes and above.

You should also know that the larger focal ratio plays a part in reducing the chromatic aberration that the achromatic lens within the AstroView would have.

Although it doesn’t necessarily remove the aberration as it is still noticeable, it ultimately will reduce it a good amount and won’t be as annoying a hindrance as refractors with smaller focal ratios would have.

Nevertheless, even with the limitations the AstroView 90mm should be able to provide a pretty solid experience when checking out the the following entities :

As for the dimensions of the AstroView 90mm, considering the systems lower technical specifications, it makes sense that it’d be fairly easy to move around. This is also made it a little easier knowing you can also just carry the mount and the tube separately making it easier system mover around (provided you can take it apart).

The dimensions and weight of the telescope are 96.5 x 43.2 x 29.2 cm by 14.5 kg respectively, which isn’t the lightest of telescopes out there but, by splitting the wholes device into 2 pieces no one should really have much of a problem with moving the AstroView 90mm around, unless it’s a small child in which case they may need a little bit of help.

The accessories that come in the box include two 1.25″ plossl eyepieces at 25mm (36x) and 10mm (91x), a 6×30 finderscope, 90-degree prism star diagonal along with a few other miscellaneous documents.

Besides the mediocre finderscope, the other accessories included with the AstroView 90mm are generally very high quality for the price so that’s definitely a major positive if you decide to invest in the device.

==>Click Here To Check The AstroView 90mm’s Pricing On Amazon!

The mount used by the AstroView is an Equatorial mount more particularly an EQ2 mount which means one axis of the mount is always kept parallel to the ground allowing for it to keep the scope focused and tracking without too much effort necessary on your part.

However, the mount is also a bit too small for the AstroView as it won’t allow for you to uses heavier items on it, like a camera for example, without it losing its stability.

On top of that, although some parts of the EQ2 are built well, such as the metal mount head, the legs of the mount are put together quite flimsily and according to users, the lightweight nature of the mount also affects that stability of the image within the viewfinder on occasions.

Lastly, it’s kind of a pain to take it apart without leaving the rings on or using tools so, transporting it to some degree will be a nuisance although not so much so that it will hugely impact your experience with the system.

If you’re curious about how to set the mount up, just watch Orion’s official video below.

What Are Users Of The AstroView 90mm Saying?

For the most part, besides the stability issues and if users are simply aware that the AstroView 90mm isn’t a very powerful device, they do tend to like the system. 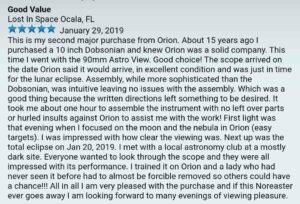 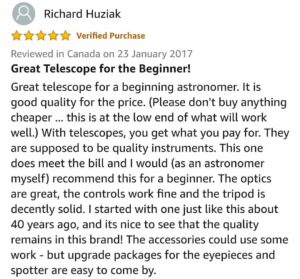 Of course this isn’t to say people haven’t had problems with it as there are some individuals who’ve received defective units but, these issues are few and far between so, as long as the AstroView 90mm is regarded as a beginner system, it’ll do nicely for those investing in it. 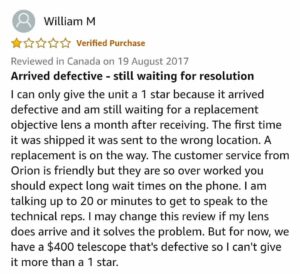 Although the AstroView 90mm is a solid device, this isn’t to say that it’s the best value for money beginner telescope or the right device for you so, I thought I’d give you fair few other options to choose from if this telescope isn’t to your liking.

On the other hand if you’re more so on a budget but want access to a slightly more powerful device than the AstroView 90mm whilst also not paying much more than $300, click here to check out our list on some of the best systems we could find for under $300.

The AstroView 90mm is a solid beginner level telescope with some very solid refractor optics, great build quality, good accessories and of course it being a relatively portable device is a major positive too.

The mount is maybe its only major weakness considering it won’t be able to support too much weight but, as a whole the AstroView 90mm is a solid beginner level device (even if a little expensive when compared to other counterparts) and one I can’t say is a bad choice if you decide to pull the trigger.

==>Click Here To Check The AstroView 90mm’s Pricing On Amazon!