If you’ve found yourself on this article, you probably want to learn how you can see Uranus with a telescope and well, that’s exactly what we’ll teaching on this article so, you’ve come to the right place.

This article will simply go over the steps necessary in order to hopefully see Neptune with any telescopic device that you may have on hand.

In order to see Neptune first you’d need to find yourself in the ideal conditions, which means clear skies and attempting to view the planet between mid July – September. After this you’ll need to use software like Stellarium to help you locate the Great Square of Pegasus, where you’ll want to draw a line between 2 of its stars from Sheat to Markab and the draw another line 1.5 times longer which will find you Phi Aquarii, where you’ll find Neptune to be around its vicinity. After this you’d need to amplify the magnification of your device to atleast 150x to see Neptune’s disc like shape and blue colour whilst seeing actual detail on the planet will require a magnification of 700x.

Throughout the rest of this article I’ll be breaking everything I’ve stated above, down in order to more clearly outline how you should go about finding Neptune and hopefully be able to observe it through optics in your telescope. 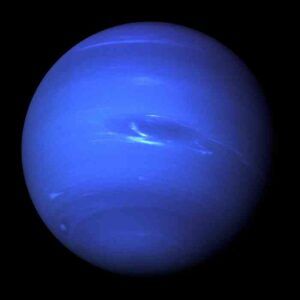 Neptune is the last official planet within our solar and was actually named after the Roman god of sea. It is the 8th planet from the Sun. In terms of size, Neptune is a little smaller than Uranus with its surface area of 7.618 billion km².

However, this still means that it’ll be able to fit at least 57 full sized Earths inside it without a problem, which really puts into perspective how huge this gas/ice giant really is.

Similar to Uranus, Neptune is blue in colour. The reason why is because the planets atmosphere is made up of  80% hydrogen and 19% helium, with trace amounts of methane, of which the methane is responsible for the blue colour.

Other interesting facts about the planet is that it takes Neptune 165 years to fully orbit the Sun, it has 14 discovered moons, it’s roughly 4.495 billion km from the Sun, the planet has a bone chilling average temperature of – 214 degrees celsius and it was also the first planet to be discovered through a mathematical calculations and prediction in 1846 by two individuals, namely Le Verrier and Johann Galle.

In short, Neptune is a really big and really cold ice giant many billions of kilometres away from us but, to now be in a position where it is possible to genuinely see it with our own eyes whilst within the confines of our planet is still a crazy through to process.

Can You See Neptune Without A Telescope?

Neptune is the only planet within our planet (minus the dwarf planet that is literally impossible to make out with our naked eyes.

Most people struggle to spot Uranus so Neptune being roughly the same size as Uranus whilst also being further away, it only makes sense that Neptune cannot be observed without the use of a telescope.

So the answer is obviously no you cannot see Neptune without a telescope.

How To Locate Neptune

Locating Neptune will probably be the hardest things to do considering how far away it is and also the fact it’s pretty much impossible to accurately see it due to how dim it is as it’s apparent magnitude is only +7.8.

For some perspective the dimmest object that the naked eye can see in space is +6 therefore, in order to find Neptune you’ll need software to give you a helping hand.

The one I personally recommend you check out is Stellarium, which is a free software too so don’t fret about spending extra money although, it may looking into one for a cleaner user experience.

Anyways, even with the software jn hand, there are a few other steps you can take in order to make finding it a little easier such as using other well known celestial entities that shine near it to guide you.

But first you’ll want to be in the ideal conditions as well as attempt to observe the planet at its brightest periods. This period will be around mid July – November. 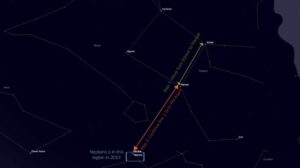 As for the process of finding the planet the first thing you’d need to locate is the Great Square of Pegasus. This is so you can find Phi Aquarii which is a fairly bright star at a +4.2 magnitude that’s pretty close to Neptune.

After you’ve found the Great Square which is next to Pisces and Andromeda, you’ll want to locate 2 of it’s 4 corner stars, these 2 are Sheat and Markab. The nest step would be to draw a line from Sheat to Markab and then continue that line until it’s 1.5 times the length of the Sheat and Markab line.

By doing that you should find Phi Aquarii and from there you’ll want to use Stellarium to find Neptune as it’ll be roughly within that region. Do keep in mind that Neptune will move every year meaning finding it will change every few years or so, mostly because it takes the planet 165 years to orbit the sun.

Moreover, Neptune also only has an angular diameter of 2.4, which when compared to Jupiters minimum 29.8 and even Uranus’ 3.7  puts into perspective how tiny and ultimately how far away Neptune is from us.

How Will Neptune Look Through A Telescope

After you’ve located the planet, the next thing you’ll need to worry about is the power your telescope can output because the truth is you will either need a bigger aperture telescope or at the very least a pretty beefed up (in terms of magnification due to accessories) system in order to see Neptune’s planet like form as opposed to a dim blue star like object.

Once you achieve a magnification of around 150x, you’ll be able to make out a blue disk like shape in the sky whilst seeing any kind of tangible detail besides a blue circle in the sky may require a telescope that can magnify upto 700x. This means your device will need to be atleast 14″ to see details, which I can tell will not be a cheap investment to make.

So, In short there isn’t much to look at when observing Neptune but, if you do manage to find and see it, you should oat yourself on the back because it honestly isn’t an easy planet to find.

So now that you have all of this information and tools you needed to observe the ice giant planet Neptune, once you have the opportunity you definitely should spend a bit of time trying to find an observe it.

Of course Neptune isn’t really the most interesting of planets to observe but, locking onto it and seeing it for the first time will, I’m sure you’ll agree with me, be a pretty darn cool experience!

2 thoughts on “How To See Neptune With A Telescope (A Basic Guide!)”