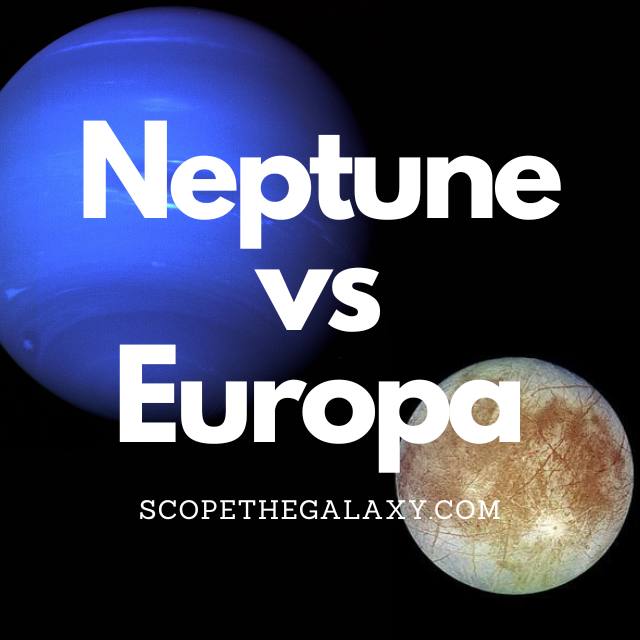 The main differences between Neptune and Europa is that Neptune is an ice giant that orbits the Sun in 165 years, has 14 moons and has the fastest wind speeds in our solar system averaging 2,000 km/h whilst Europa is a natural satellite that is 1 out of the 79 moons that orbit Jupiter, is tidally locked to the gas giant and has water ice on its surface.

There are various other differences between these two celestial objects so continue reading for a more thorough breakdown of Europa and Jupiter below along with similarities and differences.

Neptune is very cold mostly down to its distance from the Sun, where its atmospheric temperature sits between -220 to -230 degrees Celsius. Its core is far hotter coming in at 5,100 degrees Celsius and is the very likely cause for the liquid water present within the planet

Similarities Between Neptune And Europa

Neptune and Europa don’t have too many similarities but some elements are still shared, which in this case includes the below:

Differences Between Neptune And Europa

in regards to the differences between the two, they include the following:

Even though Neptune and Europa are part of the same solar system, there are a large variety of differences between these two as one is a planet and the other is a natural satellite.

Other than this, whether it be in regards to size, temperature, mass, composition and beyond, these celestial entities are very distinct from one another and ultimately function uniquely from one another too.