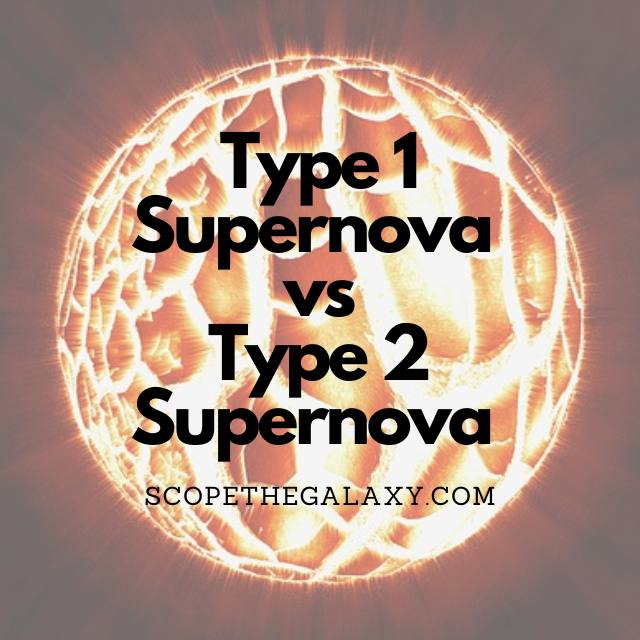 The main differences between a type 1 and type 2 supernovae is that the first type is formed when a white dwarf explodes and leaves behind no hydrogen emissions whilst the other occurs when a larger star between 8 – 50 solar masses explodes, leaving behind hydrogen emissions.

As both types are still supernova explosions, they both will be extremely bright and vibrant, with type 1’s in particular acting as candle lighting in space, to help us determine how far everything is from us.

For a more detailed breakdown on each supernova type along with the outcome after a supernova, continue reading.

What Is A Type 1 Supernova? 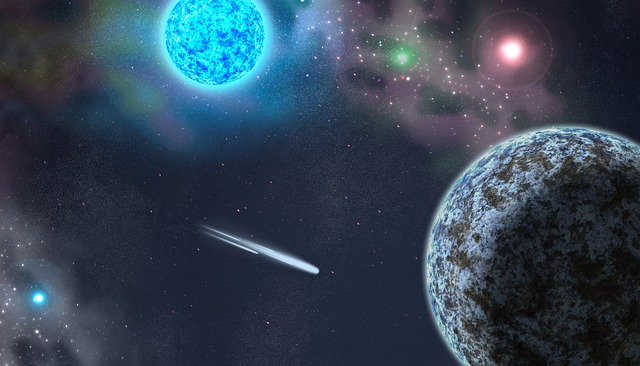 Supernova explosion occurs when either a white dwarf in a binary star system accumulates too much energy from its companion star causing it to explode or when a larger star runs out of nuclear fuel and collapses under its own gravity. This will then leave behind an explosion so bright.

It can even outshine entire galaxies.

These explosions will typically occur instantaneously but, the remnants of the explosion can stick around for a few months.

As for what a type 1 supernova is, they’re specifically distinguished by the fact they don’t leave behind hydrogen line emissions in the spectra. This type is then further split into 1 of 3 subcategories, Ia, Ib or Ic.

A type 1a supernova is the most commonly observed in outer space and acts like a candle light to help us observe distances across the deep dark unknown.

These are theorised to form after a white dwarf, likely in a binary star system, explodes due to the over consumption of energy from its companion. Type Ia’s have a strong silicon absorption line near its maximum luminosity whilst producing no hydrogen at the same time

Type Ib’s are formed after a large star collapses under its own core gravity where the outer region of the star’s hydrogen is stripped away, leaving behind only a second layer of helium.

Type 1 supernovae will often be on the smaller side for a supernova explosion, where a white dwarf that is only 1.44 solar masses can cause one. This means that they typically won’t have enough mass to result in stellar remnants other than neutron stars.

What Is A Type 2 Supernova?

These are formed when a star between 8 – 50 times the Sun’s mass collapses into itself and causes a huge explosion that produces a neutron star or black hole from the largest stars.

These larger stars will first go through a red giant phase and convert hydrogen to helium via nuclear fusion.

This will occur for a under a billion years where the star will continue converting hydrogen for as long as it can, until the energy produced by the nuclear fusion is unable to sustain balance with the inwards force, causing the star to collapse and explode.

Type 2’s are further categorized based on if their light curve show a linear decline after a maximum output (SNII-L) or under a plateau phase (SNII-P) where their brightness remains at a constant rate for extended periods of time.

Similarities Between A Type 1 And Type 2 Supernova

Supernovae all occur in much the same way, whether it be a type 1 or type 2.

It happens after a larger star collapses into itself or when a white dwarf takes in too much energy resulting in an imbalance and then the collapse of the star.

Both are extremely bright to the extent they can outshine entire galaxies yet, only burn as bright as this for for a few months at most.

And in the end of it all, both will at the very least leave a neutron star remnant behind.

Differences Between A Type 1 And Type 2 Supernova

As for the differences between the 2, its mostly down to the mass required to result in either one of the explosion and types 1’s leaving no hydrogen emissions whereas type 2’s do.

As white dwarfs have already died they will not enter a red giant phase again whilst type 2 supernovae go through that phase and explode once the balance ceases to be.

Both explosions are as grandiose as anything can be in our universe, with type 2’s having the potential to be far bigger in their showcase.

Neutron stars or black holes can be formed after the explosion has settled but the initial process is relatively the same with the main difference between the two by the lack of hydrogen emissions for type 1’s.