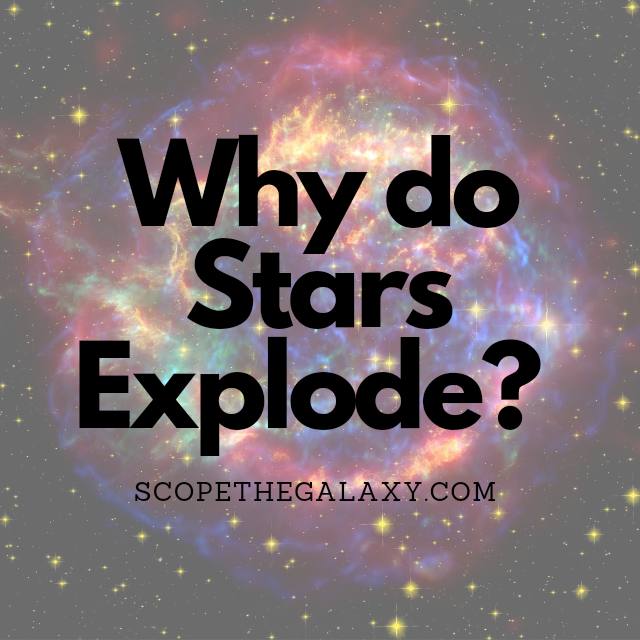 Our night skies are filled with them, bright piercing lights shining back at us, celestial beings that have an almost infinite lifespan, burning endlessly for as long as we can imagine that is. However, just like how everything dies in the end, so do these gargantuan balls of fire.

As for the main reason what makes stars explode, it’s mainly as a result of these entities reaching the end of their lifespan.

Stars will eventually run out of fuel, even if it takes billions of years for it to do so. When a star runs out of fuel the outwards heat force and the inwards force of gravity ceases to exist. This in turn causes the star to collapse within 10 – 15 seconds and ultimately results in a nebula like aftermath or the bright remains of a massive supernova explosion.

Why Do Stars Explode?

There are a few factors that need to be taken into account before a star can explode. But, the main reason any star explodes whether the size of the sun or 10 times bigger would be down to it reaching the end of its lifespan.

When gravity is pushing in towards the core of the star and an equal force of heat pressure is pushing outwards, this allows the star to remain balanced and intact.

However, if this process falters as a result of the star continuing to burn fuel and if the pressure from the core is unable to sustain the gravitational force acting towards the core, it will inevitably cause any star to explode, which in general is near enough instantaneous.

Considering the size of a star nearing it’s end, where it bloats to many times its original size (A red giant), the almost instantaneous collapse within 10 – 15 seconds as a result of gravity crushing the heat, can’t help but contribute to a grandiose and equally as terrifying explosion.

This is otherwise referred to as a nebula or a supernova explosion, where supernovas in particular only happen as a supermassive star dies.

How Do Stars Explode?

When reaching the end of their lifespan, stars will use up all of the resources they have, eventually expanding and then collapsing into themselves as a result of all the disruptive energies in their body.

In literal microseconds the core of any given star on its last legs will reach temperatures in the billions of Celsius. The heat in turn pushes the stars outwards whilst gravity pushes towards the center. As the pressure outwards is insufficient due to stars burning off their last reserves, it inevitably begins to cool.

When cooling down, the balance that has been in place for millions to billions of years ceases to be and gravity forces this dying star inwards, causing a collapse so fast (as mentioned between 10 – 15 seconds) that a massive explosion occurs.

Lager stars that are 8 times larger than our sun would create what we refer to as a supernova explosion, even forming a new atomic nuclei called Nucleosynthesis.

Although this showcase of stars exploding is grandiose and difficult to measure through our brain power alone, the death of a star is still very common in space, where there is a high likelihood of explosions occuring every 10 seconds.

Will 2 Stars Colliding Cause An Explosion?

Although most would assume that explosions would occur if stars smashed into each other, the actual result is a little different to this.

Instead, what would happen is that a binary star systems or stars in clusters would collide and then begin to merge together, forming a larger entity referred to as a luminous red nova.

What Element Causes Stars To Explode?

The 2 elements that cause star to explode are actually fused. The elements in question would be a mixture of oxygen and other heavier elements like iron, which makes the star so energetic that the formation of the entire star is disrupted, causing a supernova explosion.

What Happens After A Supernova Explosion?

Once the supernova explosion happens, the remnants of the exploded star remains in outer space for 200+ years. This phase is also regarded as the free expansion phase. The size of these remnants are so vast that they can eclipse 10+ light years in diameter.

In that case, it’s safe to say the size of these supernova remnants are unfathomable to truly scale with our brains. We simply wouldn’t be able to truly register its true size. Furthermore, Taking into account that you can genuinely spot supernovas thousand of light years away from us, they’re certainly far from small.

Keep in mind that nebulaes are what would be formed as a result of a lower mass star (8 times smaller than the Sun) exploding whilst supermassive stars will produce supernova remnants.

These explosions may be grand in they way they look but, stars exploding in space is still an extremely common event, considering it happens every 10 seconds or so.