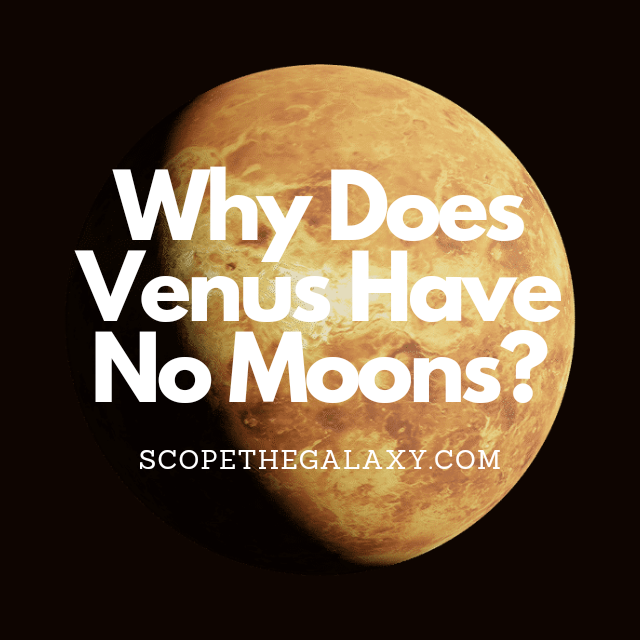 Venus doesn’t have any moons because no space debris has managed to make it into the extremely slim band around the planet, where the gravitational pull of the Sun and Venus perfectly balance each other.

Continue reading to discover why Venus may once have possessed a moon and how it lost its orbit.

Did Venus Ever Have A Moon?

Some models, such as Stepehson’s theory, suggest that Venus could have had a planet at one point in time, but this moon was lost or destroyed.

In the early years of our solar system, the planets were bombarded with material collisions, which caused several chunks of space matter to eject outwards to the planet’s orbital region. If the conditions were just right, this material could merge and form a moon.

It’s believed that our moon formed when a body of rock, the size of Mars, struck the Earth, throwing substantial lumps of material into orbit. While this material would often fall back down, the impact temporarily distorted the Earth’s shape and its gravitational field. And this uneven gravity allowed the material to stay in orbit and form our moon.

Our sister planet, Venus, has an incredibly similar makeup to Earth in terms of size and composition, and at some point in time, it would, inevitably, have been struck by space debris. Hence, there could have been a moon-like body orbiting this planet at some point in its history.

However, there’s a chance that the impacting material was insufficient to distort the gravity field enough to maintain its orbit or that the moon did orbit for a period before it drifted outwards and escaped from Venus’ gravity.

The latter of these theories is unlikely because a moon drifting from a planet’s gravity would take billions to tens of billions of years.

Another theory proposed by Alex Alemi and David Stevenson is that the lack of a moon is caused by the extremely slow rate of Venus’ rotation. Not only this, but Venus spins in the opposite direction to all other planets in our solar system.

It’s possible that Venus went under two significant impacts. While the first impact caused Venus to spin counterclockwise, it may also have created a moon similar to Earth’s. But when the second impact came, reversing the spin, it would also have affected the gravity and caused this moon to fall out of orbit.

Could Venus Ever Get A Moon Orbiting It?

Venus possesses at least 80% of the mass of Earth, so in theory, it could pull a moon into its orbit. The problem is that Venus is far closer to the Sun than Earth, and the pull of this vast star makes it difficult for the planet to hold any body in its orbit.

For Venus to have a moon orbiting its planet, the celestial body would need to sit in just the right zone at a perfect distance from Venus and the Sun. These zones could remain stable for billions of years, but this band is likely to be extremely narrow.

Venus could get a moon into its orbit, but it would need this body to come into orbit at just the right spot, the chances of which are pretty slim.

How Does The Sun Not Allow Moons To Orbit Venus?

The primary reason why Venus has no moons is that it is too close to the Sun. If a moon were to lie too far from the planet, the Sun would capture it. In contrast, if the moon were too close to Venus, the planet’s gravitational forces would destroy it.

Our Sun accounts for more than 99% of the entire mass of the galaxy; it possesses a gravitational pull that is almost 28 times stronger than Earth’s. This gravitational pull is so strong that if the planets (including Earth) did not maintain a fast enough speed, it would pull them straight into the Sun.

For this reason, it’s not difficult to understand the sheer force and impact of the Sun’s gravitational fields and how they could impact a planet such as Venus.

The Sun doesn’t prevent a moon from orbiting Venus, but it has a massive impact on the orbital band. For a moon to stay in orbit, it needs to be far enough away from its planet not to be pulled in by the gravitational pull.

For planets like Earth, this creates a band around the planet, where the conditions are perfect for housing a planet. But, at a certain distance, the force from the Sun begins to get overwhelming and pull the orbiting body away from the planet.

Because of Venus’s proximity to the Sun, this band is super slim and only provides a tiny region where a moon could sustain its orbit. The Sun doesn’t stop Venus from having a moon but massively reduces its chances.

Venus would have experienced thousands of collisions just as the other planets did in the early phases of the galaxy. But while it may once have housed a moon, the gravitational band is much slimmer today and far less likely to sustain a moon’s orbit.

Double Impact May Explain Why Venus Has No Moon – Scientific American

Why Don’t Mercury And Venus Have Moons? – WorldAtlas