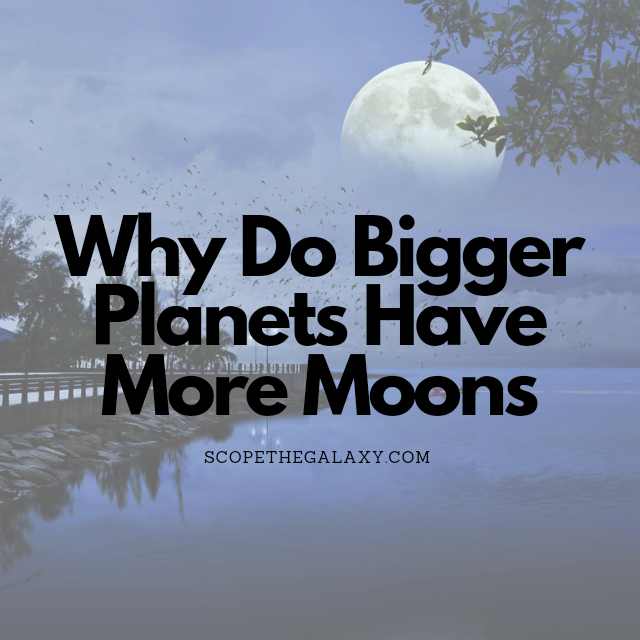 With that being said not all larger planets have more moons than smaller ones. For example, Mars has more moons than Earth even though it’s smaller whilst Pluto (which is technically now a dwarf planet) has 5 moons orbiting it.

Although more moons do orbit larger planets, what’s even more surprising is that despite the size of any given planet, every single outer planet has more moons than Mars, Earth, Venus, and Mercury.

This is mostly down to the sphere of influence the likes of Jupiter, Saturn, Neptune, Uranus, and even Pluto have over their orbiting satellites. Some also refer to this as the Hill sphere of any given planet.

In laymen terms, the Hill sphere of a planet is the circle of gravitational influence they have surrounding them with celestial objects that have a larger mass also exhibiting a far larger hill sphere causing satellites or other space debris to orbit them.

All objects with mass will exhibit a hill sphere, whether it be a smaller inconsequential gravitational pull generated by humans, or the larger more vast circle created by the moon, Earth, Jupiter, the Sun and beyond.

That’s why Jupiter, Saturn, Neptune, and Uranus have so many moons orbiting them with even more potentially joining the ranks in the future.

Why Does Mars Have More Moons Than Earth?

There are 2 things that will determine if a planet will have more than one natural satellite. The first reason would be down to the hill sphere generated as a result of their mass. The second would be down to how close they are to their parent star.

In this case, even though Earth and even Venus are significantly larger than Mars, Mars still has 2 moons whilst Venus has none and Earth one. Reason one in this case would not make sense so the only realistic reason why would be down to the Sun.

Simply put, the Sun’s Hill sphere affects the strength and ultimately the spherical influence of both Venus and Earth, making it far harder for them to influence satellites to orbit them.

Mars is farther away therefore, the Sun’s Hill sphere is far less influential, in turn allowing Mars’ gravitational pull to more easily pull other celestial objects into its orbit.

Why Does Pluto Have More Moons Than Earth?

As Pluto’s mass creates a relatively substantial spherical influence whilst the planet is also positioned billions of kilometers away from the Sun, the lack of influence the Sun has on its Hill sphere means it’s far easier to pull other moons into its orbit.

Being billions of kilometers away from the sun reduces the influence of the star’s hill sphere on pluto, in turn allowing the dwarf planet to utilise its own Hill sphere to more effectively influence other satellites to orbit it.

If say Earth were outside the Sun’s influence, it’s highly probable it’d have more than one moon orbiting it but, as is the case now, although the mass and size of any given planet is a major reason why it may or may not have more moons, it isn’t the be all and end all conclusion (in most cases), if their parent star is near enough to them.

Does The Size Of The Planet Affect The Number Of Moons It Has?

Ultimately a larger planet will have more gravitational influence causing many more satellites to orbit around it but, if the planet’s parent star is too close to it, it’s equally as likely that the moon will start orbiting the parent star as opposed to the planet in question.

Even though Jupiter currently has 69 moons, if it were to switch places with Mercury, it’s possible that Jupiter would struggle to support even a singular moon let alone the gargantuan number it has today(relative to the other planets).

Likewise, it’ll also be substantially easier for Mercury to influence a celestial object’s orbit too.

More moons will orbit larger planets as larger planets tend to have a more expansive gravitational influence over their surroundings, which as mentioned above is also referred to as their Hill sphere.

The Sun’s Hill sphere also influences the number of moons orbiting a planet. That’s why Earth has fewer moons than Mars or Pluto even though it is the bigger planet.

Nevertheless, if the hill sphere of a parent star did not influence the gravitational pull around any given planet, bigger planets would almost always have more moons orbiting them over their smaller counterparts.