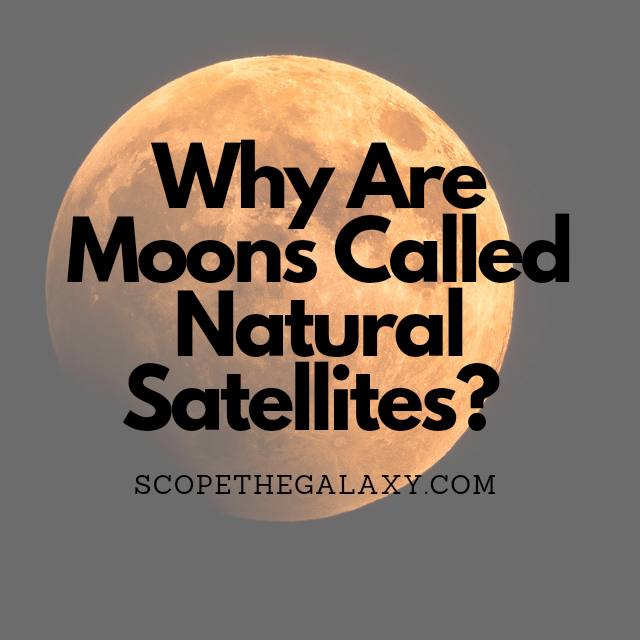 Moons are referred to as natural satellites because they naturally orbit around their respective planets Hill sphere (counterclockwise) . Artificial satellites, on the other hand, are manually placed in specific regions of space to orbit Earth, Saturn, Jupiter, etc. to deliver services, whether images, telecommunication, or weather reports for scientific and recreational use.

For a more detailed explanation on why moons are called natural satellites, continue reading as we’ll be delving into the topic further.

Objects, whether it be artificial satellites, asteroids, moons, or other debris need to be in perfect balance with the gravitational pull of a planet and the forward motion of the body in order to get locked within the orbit of their respective planet.

Our moon for example is actually following a more elliptical elongated orbital pattern which will only become equatorial once the Earth’s rotation essentially matches the rotation of the moon and vice versa.

This will also be down to the tidal friction and heat generated due to the movement of the moon. Therefore, taking into account the movement that is generated and our moon moving further away from Earth (inadvertently slowing its axial spin down), our moon in particular, will not follow an equatorial orbit for hundreds of millions to billions of years.

If you’re unaware, artificial satellites are placed in various regions within Earth’s Hill sphere with the ones closer needing more velocity to maintain their orbit over those further away. After all, gravity is far stronger the closer one is to Earth’s atmosphere whilst decreasing in strength exponentially (distanced squared) the further it gets.

Are All Natural Satellites Called Moons?

Yes, most if not all relatively large natural satellites that orbit a planet will be regarded as a Moon whether it be one as large as Jupiter’s moon Ganymede which is bigger than both Pluto or Mercury, or one as small as Pluto’s fifth moon Styx that has a diameter of only 16 km (9.9 mi) across it longest region.

In that sense, there’s no limit to the size of a moon (within reason) considering something that isn’t even 20km can be regarded as one, and others that are big enough to be planets or dwarf planets tend to be referred to as natural satellites if they’re orbiting an established planet or dwarf planet.

Is The Moon A Natural Or Artificial Satelite?

Our moon is a natural satellite as it was not artificially placed around Earth to orbit for our benefit (even if now we’ve developed technology that allows us to use tides to generate energy). Instead, billions of years ago it naturally travelled  around Earth at a fast enough pace to sustain its elongated orbital pattern.

The same applies to all the moons of any other given planet found within our local region, galaxy, and the universe itself (as far as we know).

Why Are Natural Satellites Important?

In some cases natural satellites were formed from a chunk of large debris from planet’s past (particularly terrestrial planets), this doesn’t mean that they don’t have a function for modern society. Below I’ll go over a few real world benefits of having a moon.

Firstly, they illuminate the night sky. The surface of a moon reflects the rays of the Sun towards Earth which in turn allows us to see in the dark.

This isn’t nearly as important in modern society since the advent of street lights and torches but, for areas that have limited access to light, moon rays will help a ton.

Natural satellites can also stop some asteroids from hitting the surface of planets, which is mightly important for planets like Earth with lifeforms that would die if a huge asteroid were to hit its surface.

Without tides, aquatic lifeforms would have found it harder to find land and in turn adapt. Tidal flow in theory is what has allowed civilisations like ours today to form and flourish.

The secondary function here is that we’re also able to use the potential energy formed from tides to power some of our electrical devices too.

Natural satellites help to slow down the speed at which planets spin on their axis, which not only allows for days to be longer but also allows temperatures within habitable planets to remain habitable.

if the days were shorter most regions on Earth would not have enough sun exposure, resulting in temperatures dropping exponentially which in turn would make it much harder for crops to grow naturally. This would have a knock on effect that would not only make it difficult for us but, potentially result in animals going extinct due to food shortages.

Furthermore, natural satellites to some degree force planets to spin in a regular pattern so without it, it’s possible that Earth would display a significantly more erratic spin cycle.

Ultimately natural satellites are called what they are as they’re celestial objects that naturally found their way within a planet’s Hill sphere, and naturally locked themselves in orbit without the influence of any other intelligent beings.

On the other hand artificial satellites were placed in orbit by someone else, normally for a purpose, whether it be to gather data, take images, provide services for telecommunication and so on.