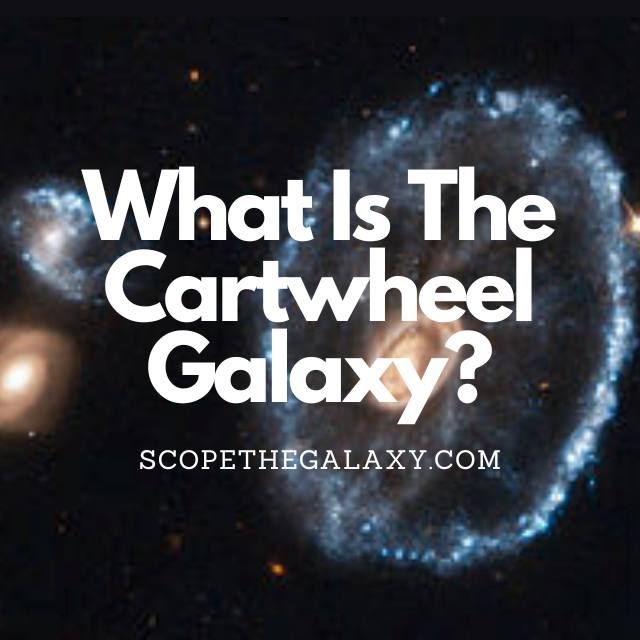 The Cartwheel Galaxy is a ring galaxy and lenticular galaxy that sits in the Sculptor constellation, around 500 million light-years from Earth. Its diameter is approximately 150,000 light-years across and possesses a mass of roughly 2.9-4.8 x 19^9 solar masses.

Continue reading to find out when this galaxy was discovered and why it is named the “Cartwheel.” Plus, the reasons why this unique formation may one day return to the traditional structure of a spiral galaxy.

When Was The Cartwheel Galaxy Discovered?

Swiss astronomer Fritz Zwicky first discovered the Cartwheel Galaxy in 1941. Upon this discovery, Zwicky considered this galaxy “one of the most complicated structures” that would have to await an explanation based on stellar dynamics.

And in November 2021, scientists discovered SN 2021afdx, a type II supernova housed in the Cartwheel galaxy.

Type II Supernovas result from the violent collapse and explosion of massive stars; astronomers distinguish them from other types of supernovas due to hydrogen in their spectra. These supernovae add enriching elements to dust and gas clouds, furthering interstellar formation diversity in the galaxy.

Here, astronomers can study the formation of massive stars; the ring structure of the Cartwheel Galaxy is home to billions of stars, which have formed over a relatively short period thanks to the high amount of activity in the galaxy.

The Cartwheel Galaxy is also one of the brightest sources of UV emissions in our local universe. This is due to the older stars of the inner region that formed during the galaxy’s collision.

How Large Is The Cartwheel Galaxy?

Scientists estimate that the Cartwheel Galaxy is around 150,000 light-years across, not too dissimilar to the Milky Way, which has a visible diameter of between 100,000 and 200,000 light-years.

This fourth companion – GH3 – could be the “bullet’ that flew through the Cartwheel’s disk and created its current shape.

Why Is It Called The Cartwheel Galaxy?

The yellow inner ring surrounds the galaxy’s center, while the blue outer ring houses the ongoing formation of stars thanks to the compression of gas and dust. To add to the “cartwheel” appearance, several “arms” poke out, connecting the inner ring to the outer.

Starburst galaxies possess large and luminous stars that end their lives as supernovas. These explosions leave neutron stars and black holes in their wake, pulling matter from nearby stars to become substantial sources of x-rays. And the Cartwheel galaxy is notable for possessing a large number of these x-ray sources.

How Was The Cartwheel Galaxy Formed?

The Cartwheel Galaxy has a unique appearance, similar to that of a wagon wheel, which has experienced tidal distortion from an earlier collision over time. Though it began life as a traditional spiral galaxy, it has a far more unique appearance today.

At one point in time, the Cartwheel Galaxy was a regular spiral galaxy until a head-on collision with a smaller galaxy changed the galaxy’s structure. Roughly 150 to 200 million years ago, the Cartwheel galaxy collided with such a force that a gravitational shockwave raced through it.

An alternative theory explains the galaxy’s unusual appearance through the “Ball-of-Light Particle Model.” In this theory, the galaxy’s core would have initially comprised a large “ball of light,” which grew increasingly unstable over time.

At some point, this core split into two or three smaller light balls, which would transform into the associated galaxies. This theory helps to explain why there is a trail of hydrogen gas connecting the central Cartwheel galaxy to one of the smaller galaxies nearby.

In this suggested sequence of events, the remaining core would possess a sizable electromagnetic field that would expel stars, creating the spokes in the galaxy.

However, the galaxy is starting to return to its original spiral structure as seen through the “cartwheel spokes” or arms that protrude from its core. Over the next several hundred million years, scientists predict that the Cartwheel’s structure will disintegrate as the remaining dust, gas, and stars fall back to the center.

At this point, the galaxy will return to a traditional spiral shape, though this will only be possible as long as the companion galaxies G1, 2, and 3 do not collide within the Cartwheel.

The Cartwheel Galaxy is a complex structure combining lenticular and ring galaxies in the constellation Sculptor. Astronomers did not discover this galaxy until the 1940s, but today it is a fascinating source of study for the formation of stellar bodies.

The unique wagon wheel structure provides the name of this galaxy, but over the next several million years, it will likely return to a traditional spiral shape.