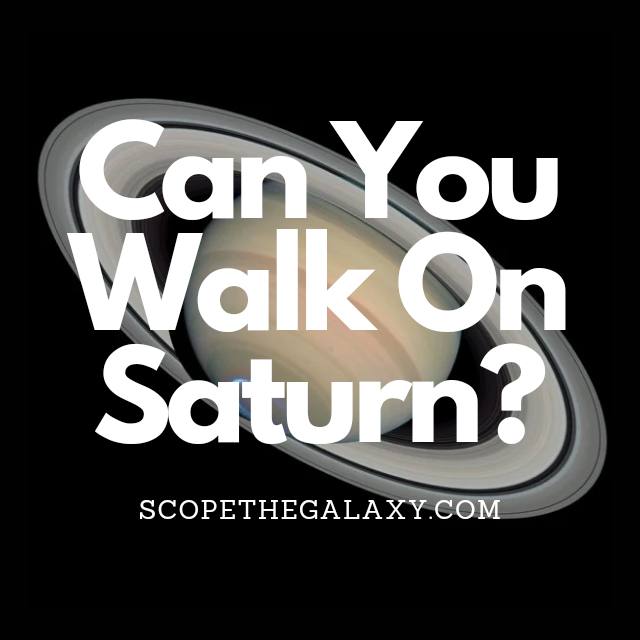 You can’t walk on Saturn because it is a gas giant with no solid ground. If you tried to walk on its surface, you would sink into the hydrogen and helium-packed environment, quickly succumbing to the high pressure and temperature until it crushed you.

Continue reading to discover whether it’s possible to walk on any part of the planet Saturn and what would happen to you if you were to fall into its atmosphere.

Why Can’t You Walk On Saturn?

Put simply; we can’t walk on Saturn because there is no solid surface. If we look at pictures of Saturn, it appears to have a solid surface, so what are we actually looking at?

The outer atmosphere of Saturn contains 93% molecular hydrogen, with the remaining 7% mainly composed of helium with a few trace elements of ammonia, ethane, methane, acetylene, and phosphine.

While these trace elements are small, they are significant enough to create visible bands that appear solid to us when we look at images of Saturn.

Beyond these clouds, though, there is no surface, and as you venture deeper into the atmosphere, the pressure builds to a point where even liquid starts to feel denser than solid rock.

How Would You Be Able To Walk On Saturn?

Saturn’s troposphere contains three separate regions characterized by the temperature at which condensation occurs, allowing droplets to form clouds. The highest visible region sits 100km below the troposphere’s top and contains clouds made of ammonia.

The second region (located just below the troposphere, in the tropopause) contains ammonium hydrosulphide clouds. Below that, temperatures sit at zero degrees celsius, and clouds can form from water droplets.

Once you landed and stepped onto the surface of Saturn, you would experience a gravity not too dissimilar to that of Earth. The gravity of Saturn sits at 91% of Earth’s, so if you weigh 100lbs on Earth, you would weigh 91lbs on Saturn.

Can You Walk On Saturn’s Rings?

Yes and no. You can step foot on the rings of Saturn, but they might not be what you expect. While Saturn’s rings appear solid in the photographs we look at, they are, in fact, made up of millions of pieces of rock and space debris ranging in size from a speck of dust to the size of a bus.

So you can walk on part of Saturn’s rings, but you wouldn’t be able to walk a continuous circuit. (If you could, you would have to walk 12 million kilometers to complete a course around the outermost ring.) Your best chance of engaging in a “space walk” would be to land on one of the larger bodies, such as one of Saturn’s moons.

Theoretically, you could walk on Saturn’s moon Titan, though you would need to meet a set of complex requirements.

Titan’s atmosphere is unlikely to be toxic; still, the lack of oxygen would make you choke, so you would need a suitable breathing mask. With frigid temperatures, thick clothing and outer protection would be a must – maybe even an internal heating system. And you would have to allow time to adapt to the pressure of standing on this moon.

Even with an adequate spacesuit and proper preparation, there are several hazards that you would need to watch out for on the surface. Patches of hydrocarbon ice would quickly melt beneath your feet and turn into a quicksand-like substance, and it would be impossible to float in one of the moon’s lakes unless you had a large enough buoyancy device.

If you did walk around the rings of Saturn, you would experience “ring rain” – a phenomenon where tiny particles of ice fly away from the rings towards Saturn itself.

That’s because Saturn’s magnetic fields are slowly breaking down the rings, drawing away enough moisture to fill an Olympic swimming pool every half hour. In fact, if you traveled to Saturn in 300 million years, the rings would probably disappear entirely.

What Would Happen If You Fell Into Saturn?

Arriving on Saturn, you would realize there is no solid surface to this planet; instead, the atmosphere is full of electrical currents, harsh winds, and unfathomable pressure. If you somehow managed to get through this deadly atmosphere, you would only continue to face more and more dangers.

If you fell into Saturn, the surrounding atmosphere would quickly overwhelm you. The deeper into the planet you travel, the more change in density and temperature you will experience. This high heat and pressure would soon overwhelm you, and you would be crushed inside the planet.

As you fell, it would seem like an endless stream of boiling, pressurized liquid, and there would be nothing solid to break your fall. Even if you could find a stable platform, the pressure would be significant enough to overwhelm even our strongest spacecraft.

If you could somehow make it to the core of this planet, you would find a boiling center of iron and nickel, discovering the answer to a question that scientists have long been asking – is the core solid or liquid?

It’s impossible to walk on Saturn as the planet has no solid surface for you to walk on. Instead, if you fell into this gaseous atmosphere, you would fall towards the core, becoming overwhelmed by the temperatures and pressures around you.

If you could travel to Saturn, you’d have a much better time trying to land on one of the surrounding bodies, such as a moon, where a solid surface would allow you to walk around.

What is the Surface of Saturn Like? – Universe Today

Can one walk on Saturn’s surface? – Quora

What Would Happen If Humans Tried To Land on Saturn (businessinsider.com)