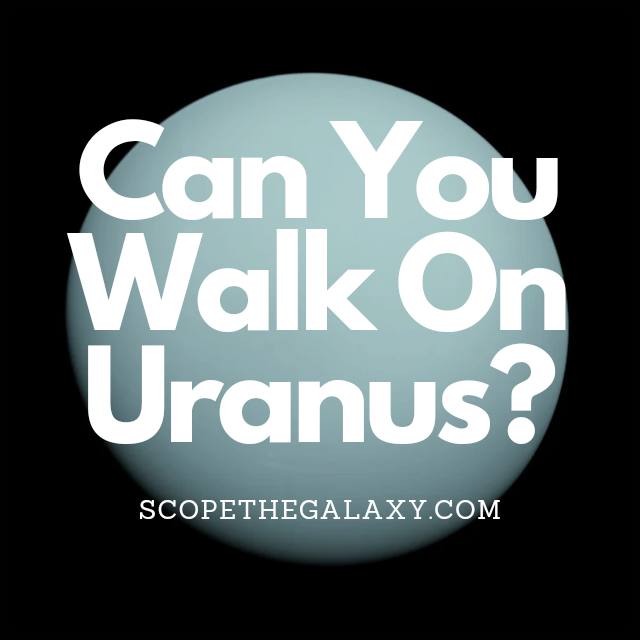 You cannot walk on Uranus because it doesn’t possess a solid surface, so there is nothing for you to walk on. This ice giant primarily comprises hydrogen and helium, with trace amounts of methane that give the planet its distinctive hue. If you could somehow make it through the atmosphere, you would find yourself sinking into the icy liquids of the main planet.

Continue reading to discover whether you could walk on any part of Uranus, plus the reasons why. And learn what would happen if you were to fall into the icy body of this planet.

Why Can’t You Walk On Uranus?

The term “ice giant” might lead you to believe that Uranus has a solid, icy surface that you could walk on, similar to the landscape of the Antarctic, but that is not the case. 80% of the planet comprises a hot and dense fluid composed of “icy” materials like water, ammonia, and methane.

At the center of Uranus is a small rocky core; here, temperatures can reach up to 4,982 degrees Celsius. Despite this solid core, Uranus is the second least dense planet, following Saturn.

In images, Uranus appears to have a solid blue-green surface, but what we’re actually seeing is the methane gas present in the atmosphere. As sunlight passes through the atmosphere of Uranus, methane absorbs red light leaving a blue-green hue visible.

There is no true surface of Uranus. Instead, the planet is mainly composed of swirling masses of fluid. If you were to take a spacecraft to this planet, you would have nowhere to land. Not only that, but the extreme temperatures and pressures of the atmosphere would likely destroy any spacecraft you attempted to pass through this dense environment.

How Would You Walk On Uranus If You Could?

Humans can only walk on terrestrial planets, not the gas or ice giants. If you tried to stand on the surface of this planet, you would quickly sink through the hydrogen and helium-filled atmosphere, down into the icy liquid at its center.

So far, only one spacecraft has reached the distant landscape of Uranus, which sits more than three billion kilometers from Earth. Therefore, our knowledge of this planet is still limited, though there are some interesting hypotheses, such as the fact that it may rain diamonds in this unique landscape.

If you could walk on Uranus, the first thing you would need would be a specialized spacesuit that could protect you against the harsh temperatures and pressures of this icy world. Without a spacesuit, your journey through Uranus would only last for a maximum of two minutes.

Bearing in mind that winds can reach 580km per hour and temperatures can drop to -218 degrees Celsius, it’s easy to see how quickly this extreme environment could overwhelm a human being, even with our best protective gear.

Can You Walk On Uranus’ Rings?

Uranus has two main sets of rings; the inner set consists of dark grey rings, while the outer group has a rusty red ring and one with a blue hue similar to Saturn’s E ring. In total, Uranus possesses 13 rings and 27 moons.

Many of these rings comprise chunks of ice around the size of golf balls, which are darkened by rocks; they are so dark that they reflect a similar amount of light that charcoal does. In contrast, the outer ring contains boulders that can span several feet across.

There is no way to walk a circuit of Uranus’ rings because they are not solid entities. Instead, they are made up of millions of separate chunks. Many of these chunks would be far too small to support a person’s mass.

If you could find a boulder that was sizable enough, you may be able to stand on one of these space rocks, but walking would be impossible. Not only that, but the lack of gravity would make it almost impossible for you to remain standing on one of these small bodies.

You may be better attempting to walk across the surface of one of the moons of Uranus, such as Titania or Miranda. Though to put the lack of gravity into perspective – Titania (which has the most substantial gravity of all Uranus moons) has around 4% of Earth’s gravity. Therefore, if you weigh 100 lbs, you would feel like you only weighed 4lbs!

What Would Happen If You Fell Into Uranus?

If you tried to stand on the surface of Uranus, you would find that there is nothing solid, and you would simply fall into the planet. After passing through the hydrogen and helium of the upper atmosphere, you would find yourself in the icy liquids of the center.

The atmosphere on Uranus consists mainly of hydrogen and helium alongside trace elements of methane, ammonia, and water. Here the minimum temperature can drop to -224.2 degrees Celsius, making it even colder than Neptune in some places.

Winds reach speeds of 900 kilometers per hour, blowing retrograde at the equator and prograde closer to the poles. The magnetic fields of this planet are also largely irregular thanks to the 98-degree tilt, which twists the magnetic lines in long corkscrew shapes.

If you could somehow reach the center of the planet, you would find that temperatures reach nearly 5000 degrees Celsius. This may sound surprising for an “ice” giant, yet the core actually exudes more heat than it draws in from the Sun.

Uranus has no solid surface, so it would be impossible for us to walk across this ice giant. Even if we could somehow find a way, the extreme temperatures and pressure would likely overwhelm us leaving us frozen and crushed.

Can you walk on Uranus? Explained by FAQ Blog (faq-blog.com)