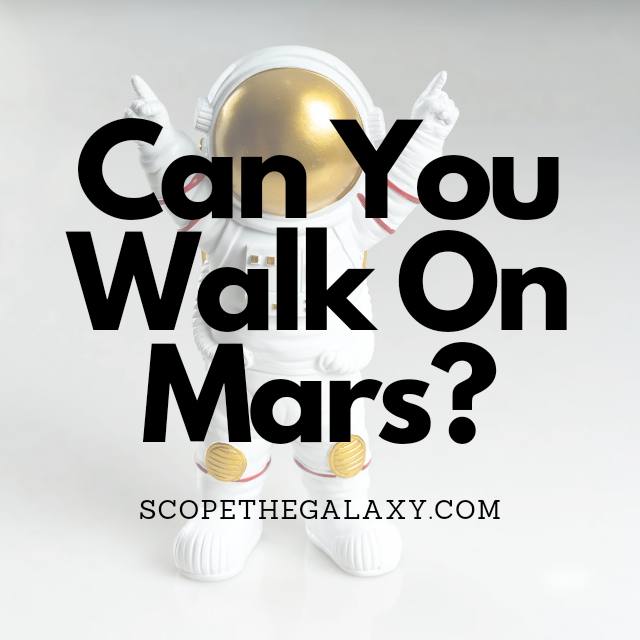 Whether we can walk on Mars has been debated for years. While the possibility of humans one day being able to explore the red planet is exciting, we must overcome many challenges before this dream becomes a reality.

From the hostile environment on Mars to the difficulty in getting supplies and equipment there, walking on Mars is much more complicated than it may seem although we can technically walk on the red planet as it a terrestrial entity, we would still require astronaut suits to do so.

In this article, we will discuss some of these challenges and explore what needs to be done for us to take a stroll on Martian soil one day.

What Would Happen If We Were To Walk On Mars?

Mars is the fourth planet from the Sun and the second-smallest planet in our solar system. Its surface comprises various materials, including basaltic rock, dust, and ice. The planet’s famous red hue comes from a fine layer of iron oxide covering its surface.

Mars is also covered by craters, canyons, volcanoes, and other features that give us an insight into its history and formation. By studying these features on Mars’ surface, we can learn more about the planet’s geology and climate. In addition to this knowledge, understanding what the surface of Mars is made of can also help us better prepare for future human exploration missions to the Red Planet.

Mars is one of our closest neighbors, perhaps the closest match to Earth’s terrain. There is a solid surface, free of molten liquids or frigid slushy ices – and there is no extreme pressure to crush us to death.

Walking along the surface of Mars wouldn’t be as springy as the moon, but a lower level of gravity would leave you feeling extremely light. The red terrain would be wondrous, as long as you didn’t get swept up in one of the storms that occur on the surface of this planet. And at night, you could see the twin glow of Mar’s moons, Phobos and Deimos.

How Long Could We Stay On Mars?

Movies like The Martian have inspired many of us to think about what life on the red planet might be like. But the truth is, the colonization of Mars remains in the realms of science fiction – for now, at least. The first challenge would be the lack of oxygen in Mars’s atmosphere.

Remember, our current spacesuits are far less efficient than the ones we see in the movies and are far easier to damage. A minor accident such as a tear could be a life-or-death situation if you were away from your station. And a relatively minor inconvenience – such as a twisted ankle – on Earth could be all it takes to prevent your safe return to base on Mars.

These space suits each cost millions of dollars and takes months to build, and you would constantly need to monitor your oxygen levels to check that you always had enough to make it back.

Without a spacesuit, you would stand no chance at all. Temperatures on a summer’s day can sit around a comfortable 20 degrees Celsius. Still, these temperatures drop well below freezing in the cold of night, with winter nights as cold as -140 degrees Celsius.

In addition, the atmosphere is well below the Armstrong limit thanks to it being a near vacuum – air this thin would cause numerous problems. Even if you could find a way to breathe, the moisture in your lungs plus the saliva in your mouth would quickly boil thanks to the thin air.

How Would Mars’ Gravity Affect Us?

Mars’s gravity is approximately one-third that of Earth. This means that a person who weighs 100 pounds on Earth would only weigh 38 pounds on Mars. The gravity on Mars is weaker than Earth’s due to its smaller size, mass, and distance from the Sun. Despite this, it still affects the atmosphere, surface features, and even the way spacecraft lands or takes off from its surface.

On Earth, humans use gravity to “fall” forward with each step and use this speed to create motion. In comparison, the much weaker gravity of Mars means that an “ideal” walking speed would be less than half that on Earth. It could take twice as long to travel between a set distance.

Still, this low gravity means that moving any object would expend half as much energy as moving that same object on Earth. And low gravity can have a significant impact on the human body.

Studies have shown that long-term exposure to low gravity can lead to bone and muscle loss and other health complications. This is because the lack of gravity causes bones to become weaker and muscles to become smaller due to lack of exercise. As a result, astronauts who spend long periods in space are at risk for osteoporosis and muscle atrophy.

Additionally, low gravity can also cause changes in the cardiovascular system, which can lead to dizziness and fatigue. Therefore, astronauts and other space travelers must be aware of the potential risks of low-gravity environments.

Walking on Mars is still the work of science fiction in today’s world for several reasons. We need technology developed enough to support us in an oxygen-free environment where the air is thin, and temperatures drop far below freezing.

Still, several great scientific minds are working on getting humans to the red planet, and this could likely become a reality in the next few decades.

ESA – How will we walk on Mars?

Will we ever set foot on Mars? | BBC Earth