It’s impossible to walk on the surface of Jupiter because there is no surface. Instead, there is a dense atmosphere that seems to stretch out endlessly into a hot, pressurized core.

Continue reading to discover the reasons why you can’t walk on Jupiter, plus what would happen if you were to fall into the atmosphere of this giant.

Why Can’t You Walk On Jupiter?

As a gas giant, Jupiter has no solid surface, making it impossible for a person to walk on. The planet is composed mainly of hydrogen and helium, with a few trace gases also present. When we look at the planet Jupiter, it seems solid, but what we’re actually seeing is a dense layer of clouds in the outer atmosphere.

These clouds are composed mainly of ammonia which extends around 50km in the upper reaches of Jupiter’s atmosphere.

If you tried to walk on Jupiter, you would sink into its surface, being crushed by the immense pressure of the surrounding atmosphere. And aside from the crushing environment, you’d struggle to survive the intense radiation of this planet.

Jupiter is the largest planet in our solar system and possesses the most powerful magnetosphere. And these magnetic fields accelerate nearby particles to extreme speeds, which seriously affect the electronics on your spacecraft.

For a spaceship to safely orbit the planet, space agencies would need to design a spacecraft that could significantly reduce this exposure. NASA did create a triple-arrayed, perpetually spinning spacecraft called Juno, though this design is not feasible for humans.

How Would You Walk On Jupiter If You Could? 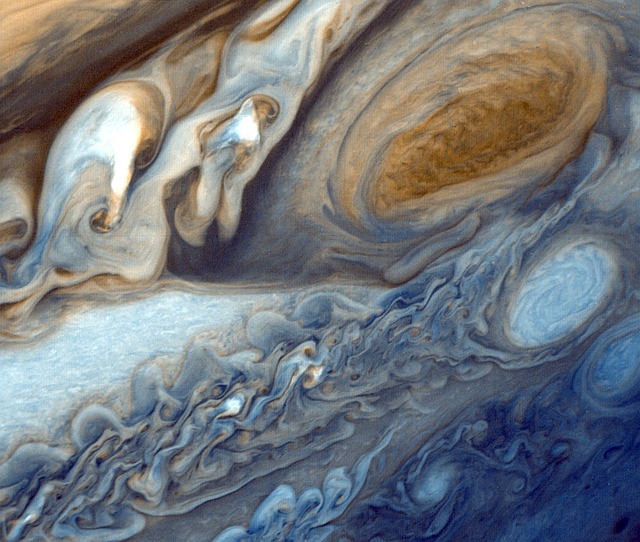 Quite simply, you can’t walk on the surface of Jupiter because there is nothing to walk on. But, say you could stand on this planet’s surface, you would experience a gravity 2.5 times higher than the gravity on Earth.

Say you weigh 100 lbs; in that instance, standing on the surface of Jupiter, you would weigh 250lbs.

While walking on Jupiter is impossible, you could try swimming instead. Once you descended enough of the atmosphere to reach Jupiter’s inner layers, you would find an interesting substance called supercritical fluid.

This matter sits somewhere between a liquid and gas and is an excellent consistency for swimming. The problem is, as you swam through the material, temperatures would reach and exceed those equivalent to the surface of the Sun.

Can You Walk On Jupiter’s Rings?

Saturn may be famous for its rings; still, many planets in our solar system possess these phenomena, including Jupiter. Jupiter has rings that comprise mainly dust. Because dust doesn’t reflect light as well as the bigger lumps of rock and ice in Saturn’s orbit, these rings appear far more faintly.

While the “rings” around the planets may appear solid enough to walk on, they are, in fact, just vast collections of dust, far too insubstantial to support the weight of a human.

What Would Happen If You Fell Inside Jupiter?

If you tried to land on Jupiter, you would find that it doesn’t have a surface. Instead, it possesses a seemingly endless atmosphere. Trying to jump on the planet in a standard space suit wouldn’t get you very far; as soon as you got within 300,000km of the planet, you would die from the radiation penetrating your suit.

Say you could get a spacesuit that could somehow protect you against the radiation, you’d still be in for quite a ride. Falling through the atmosphere, you would reach speeds of 180,000 km per hour, much faster than falling through Earth’s atmosphere. (This is because of the increased gravity on Jupiter.)

Once you traveled 250km into the atmosphere, you would reach ammonia clouds, where temperatures would drop to -150 degrees Celsius. And the clouds would create wind speeds of up to 482 km/h, giving you the experience of flying through a giant multi-colored tornado.

Another 120km into the atmosphere, you’d arrive at the deepest point that a probe has ever made it to. Here, the pressure becomes so high that you’ll start to become compressed by the surrounding atmosphere.

Say, your special space suit could overcome these pressures. In that case, you’d continue to travel further into the planet’s atmosphere, which would become darker and darker, the only light coming from the storms surrounding you.

At this point, you’d be experiencing a pressure more than 1000 times that which you would experience when standing on Earth’s surface. After 12 hours, you’d continue to fall with the temperatures and pressure increasing all around you.

Finally, you would reach the inner layers of Jupiter. Here you could swim in the hot supercritical fluid. But as you continue to travel, you’ll face temperatures equivalent to the Sun’s surface and pressure exceeding 2 million times the amount of pressure you would experience when standing on Earth.

And if that wasn’t enough, you’ll be surrounded by a dense liquid called metallic hydrogen which will hold you in its grasp. This fluid extends for thousands of kilometers until you reach Jupiter’s core.

If you fell into Jupiter, the pressure and temperature of the atmosphere would destroy you long before you managed to reach the surface. Still, if you could find a way to overcome these obstacles, you would experience an endless fall until you reached the planet’s core. Here, the atmospheric pressure would trap you for eternity.

Walking on the surface of Jupiter is impossible as there is no solid matter; however, you could swim through part of its inner layers. To do this, however, you would need to find ways to escape death by radiation as you approached the planet; and possess a space suit strong enough to protect you against temperatures as hot as the Sun’s surface!

What is the Surface of Jupiter Like? – Universe Today

What If You Fell Into Jupiter? (insh.world)