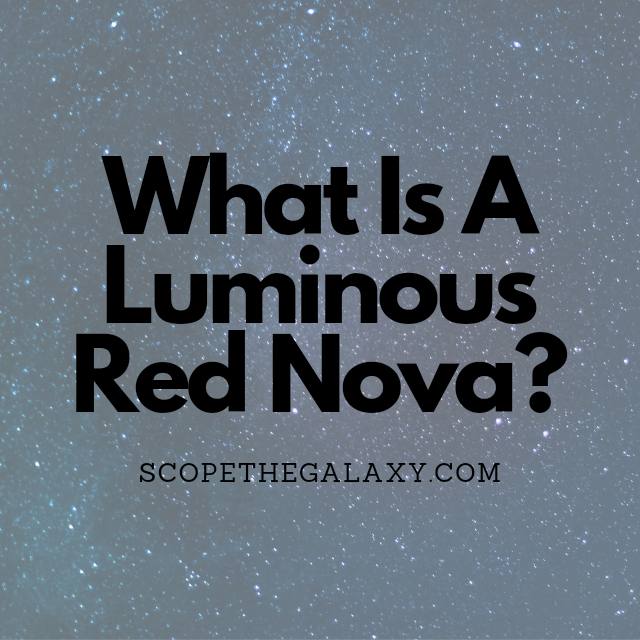 A luminous red nova happens when two stars merge, causing a stellar explosion. These novae possess a distinctive red hue and a lingering light curve on the infrared spectrum. And we can differentiate them from standard novae, which occur on a white dwarf’s surface.

Continue reading to discover how luminous red novae form, when they were first discovered, and how abundant they are in our universe.

How Do Luminous Red Novae Form?

Astronomers believe that M85 OT2006-1 formed after the merging of two main-sequence stars. When one of these mergebursts occurs, they can cause the luminous red nova to expand rapidly and grow to tens of thousands of solar radii within only a couple of months.

And this hypothesis allows scientists to predict when the next luminous red nova will occur. They observe stars that are in close contact, looking for those whose orbital periods are speeding up. Once the period shortens enough, the stars approach a merger, and if they reach a “critical closeness,” it will trigger a luminous red nova.

Luminous red novae possess a number of observable characteristics – they have an explosion luminosity that is more bright than a nova but less bright than a supernova, and they exude a distinctive red hue that is observable for several weeks or months.

Over time this light dims, gradually becoming more red as the infrared properties grow. This dimming and brightening often occurs a few times over an extended period.

When Was The First Luminous Red Nova Discovered? 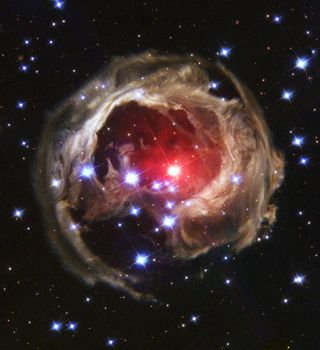 Over the last 30 years, a few objects have caught the eyes of astronomers because of characteristics similar to that of a red nova. In 1988, M31 RV – a red star in the Andromeda galaxy – flared brightly in what we retrospectively know may have been a red nova.

However, the first confirmed sighting of a luminous red nova didn’t happen until 24th February 2006, when astronomers spotted M85 OT2006-1 in the Messier 85 galaxy. Teams from U.C. Berkeley and Caltech later confirmed that they could differentiate this occurrence from other known explosions like thermal pulses or novae.

V838 Mon is the most famous red nova, thanks to the brightness of its light echo. Still, there is no evidence that it formed from a merger. But, other luminous red novae, such as the one discovered in the galaxy M101 in 2015, pose a great example of a merger.

Here, we see evidence that a common envelope formed in a binary star system before the merger occurred. Interestingly, the data also showed another outburst occurred three months before its discovery.

The pre burst before the red nova suggests that a shock wave begins to form when the two stars’ cores merge.

How Many Luminous Red Novae Are There?

An astronomer rarely observes a luminous red nova, and only a handful have been discovered. By 2016, astronomers had only confirmed the existence of four luminous red novae in our galaxy and a further four extragalactic ones in the Pinwheel Galaxy.

An accurate estimate of space phenomena is hard to achieve. Still, current models suggest that over 50% of all the objects within our universe live alongside a partner, including everything from stars to black holes.

Theories also suggest that at one time or another, many of these “mates” would experience a period where they existed in a common envelope. But numerical simulations are difficult because of our limited understanding of the complexity of these interactions.

Scientists predict that a luminous red nova occurs once every 2 to 30 years in our galaxy, the Milky Way. Still, they can appear faintly in the sky, making them difficult for astronomers to cite with our current telescopes.

Luminous red novae are stars that erupt into cool supergiants. Grouped with the eruptions of massive stars, these phenomena form a new class known as Intermediate Luminosity Optical Transients – or ILOTs.

An ILOT refers to an object in space that undergoes a visible explosive event with an absolute magnitude that is brighter than a nova but less bright than a supernova.

While the formation of luminous red novae is not yet confirmed, the most widely accepted model suggests that when two stars in a binary system become locked, one will begin to shed material onto its companion.

Based on its age and mass, the receptor cannot always keep up with the amount of stellar gas gifted from its donor, and both stars become immersed in a “common envelope.” Here, the cores spin around one another faster and faster, ejecting material outward in the phenomenon we observe as luminous red novae.

This process would mean that the object cooled and helps to explain how a bright flash could co-exist with a cooler post-flash object.

At the peak of the explosion, these stars become the brightest in their galaxy; only supernovae possess a greater luminosity.

A luminous red nova is a space explosion, most likely caused by two binary stars merging to become one. While regular novae explode on the surface of white dwarves, a luminous red nova shines with a bright red hue.

There is still much to learn about the formation of these galactic phenomena, though popular models already allow scientists to predict when the subsequent explosion may occur.

Will These Two Stars Merge Into A Luminous Red Nova In 2022? (forbes.com)