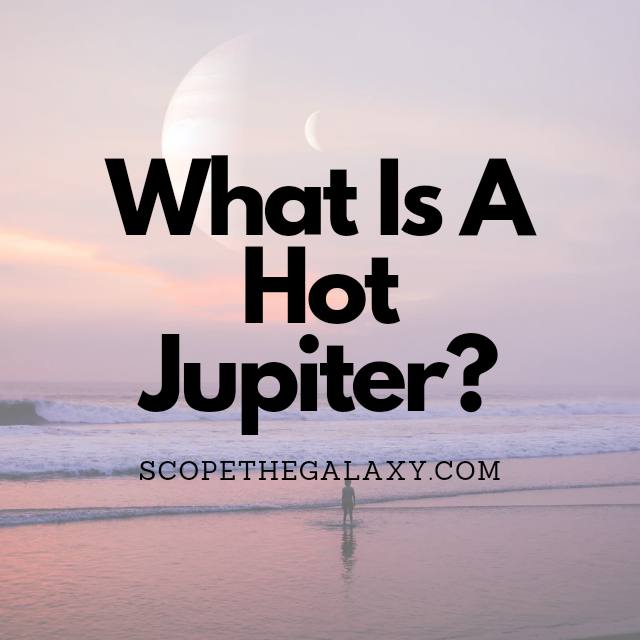 Scientists use the term “Hot Jupiter” to describe any planet with a similar size and mass to our Jupiter but sitting closer to its own star. These “Jupiters” form from the central star, but some migrate inwards. These are the hot Jupiters.

Continue reading to discover how hot a hot Jupiter is, how it forms, and the difference between our planet Jupiter and these exoplanets.

How Hot Is A Hot Jupiter?

Hot Jupiters are exoplanets with similar characteristics to our planet Jupiter. For example, they might have a similar mass or size.

What’s different is the incredible temperatures of these planets which can reach more than 1,700 degrees Celsius. The reason for this is that they orbit their star far more closely.

Astronomers have discovered more than 700 Hot Jupiters, and a study into 49 of them has provided us with some fascinating insight.

The final family is the “ultra-hot Jupiters,” whose fiery inferno exceeds 1,700 degrees Celsius.

One fascinating trend from this study was that none of the “cooler” exoplanets have methane in their atmosphere. In contrast, the ultra-hot Jupiters whip together a gaseous cocktail of methane and carbon monoxide in their atmospheres; the hottest planets create the most potent mixtures.

How Do Hot Jupiters Form?

A hot Jupiter may possess some similar physical characteristics to our own Jupiter; still, the former can complete an orbit of its star in less than ten days (pretty incredible when you compare it to our own Jupiter, which takes just under 12 years.)

These exoplanets all form similarly; they collect gas and dust using gravity. How they become “hot” Jupiters is slightly more complex and gives way to three possible theories.

The first theory of hot Jupiters is “migration.” This theory suggests that these exoplanets form behind the frost line of a star in an area where volatile compounds such as water, carbon dioxide, and methane no longer condense into solid matter.

Following the planet’s formation, it migrates toward the star, eventually settling into a stable orbit. Type II migration is a smooth form of movement that occurs during a solar nebula phase when gas is still present.

During this time, the energy of stellar photons and winds deplete much of the remaining nebula.

This theory of migration is one of the leading scientific hypotheses, driven by the gravitational forces of nearby stars and planets that can alter the orbit of a hot Jupiter.

Migration via other mechanisms – such as the Kozai mechanism – can occur after the gas disc is diminished.

An alternative theory is the “In situ” hypothesis. This states that a hot Jupiter begins life as a super-Earth, accumulating a gas disc while in its present location.

However, many scientists argue against this theory because of the planet’s need to assemble a massive core of a least 104 g/cm2.

Recent surveys have discovered that many inner regions of a planetary system are occupied by planets similar to super-Earths. If these planets were to migrate inward, the formation would not be entirely in situ.

What Differentiates A Hot Jupiter From A Cold Jupiter?

Imagine a planet more massive and ten times hotter than any of those in our solar system. These giant infernos burn with swirling masses of gas in a dynamic atmosphere and orbit their sun at lightning speeds – the fastest can complete a circle in less than one Earth day.

While the planets of our solar system maintain a safe distance from the Sun, hot Jupiters travel recklessly close to the surface of their own star and speed around in an orbit that is only a fraction that of the planet Mercury.

Here, one side of the exoplanet is blasted by far more powerful star light than the gentle heat absorbed by the planets in the Milky Way. Their tidal lock means that one side of the planet is permanently in daylight while the other exists in perpetual nighttime.

Despite this continuous darkness, temperature maps drawn up by astronomers reveal that a “low” temperature here sits around 926 degrees Celsius, ten times hotter than our planet Jupiter. And these excessive temperatures are believed to drive ferocious winds.

The main difference between a hot Jupiter and a cold Jupiter is the planet’s proximity to its star; A hot Jupiter sits closer to its sun than any planet in our solar system. This means it is far hotter, more volatile, and travels around its star in a reduced period.

Why Is Our Jupiter Not A Hot Jupiter?

The Milky Way’s Jupiter is not a hot Jupiter because it orbits the Sun from too great a distance, meaning it is much cooler and experiences less extreme weather variations.

Our planet Jupiter orbits the Sun at an average distance of 778,299,000 km, meaning that one complete orbit (one year) of the Sun takes 4332.59 Earth days – almost 12 years! In contrast, hot Jupiters can complete an orbit of their stars in just a few days.

In addition, the weather on a hot Jupiter is far more extreme. For example, if a hot Jupiter were to possess a great red spot, like our own planet, it would likely cover a quarter of the planet’s surface.

A hot Jupiter is an exoplanet that may look similar to our own planet Jupiter but is, in fact, very different. The temperatures exceed ten times that of our planet, and the close proximity to the Sun makes the orbit far shorter.

(26) What is a so-called Hot Jupiter? – Hot Jupiters – Science at NASA – YouTube