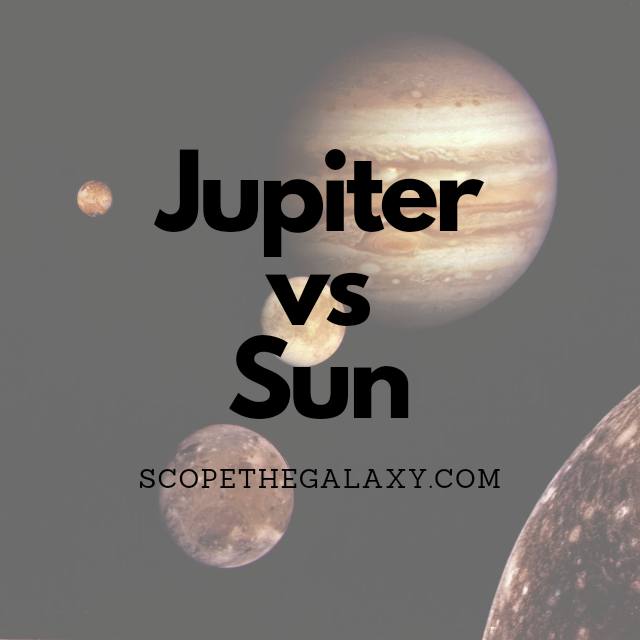 The main differences between the Sun and Jupiter is that the former goes through nuclear fusion, which allows it to create light, is roughly 10 times the width of Jupiter, is hotter and far heavier than Jupiter, weighing roughly 1000 times more than the gas giant.

Both celestial objects are similar in how they are composed and even in regards to their age but, they function very differently from one another. For a more detailed look at differences, continue reading as I’ll be covering it more thoroughly below.

As the biggest planet in our solar system, Jupiter is roughly 143,000 km or 1,300 Earths in diameter, it has a mass of around 0.001 solar masses, the temperature when inside the clouds are roughly -145 degrees celsius whilst the core is far hotter, equating in the region of 24,000 degrees celsius.

Jupiter has a relatively fast rotation around its axis where 1 rotation typically takes 10 hours to make whilst its orbit around the Sun is far longer taking in the region of 12 years for 1 full cycle.

Is Jupiter A Failed Sun?

No, Jupiter is not a failed star or a brown dwarf as some would refer to it as. The reaosn for this minor confusion is down to the fact Jupiter’s diameter is similar to that of a brown dwarf.

However, other than the composition of the gas giant being somewhat similar to a stars, thermonuclear fusion does not occur at its core due to its lack of mass therefore, it cannot be classified as a star.

If say Jupiter was at least 13 times its size, it may have become a failed brown dwarf star or roughly 80 times larger to become a main star sequence but, this isn’t the case and likely will not ever be the case.

Mass is what is most important for any celestial object to become a star but, Jupiter has never has and likely never will achieve the required mass to become one.

Similarities Between Jupiter And The Sun

The main similarity between Jupiter and the Sun would have to be down the similar gaseous composition. This is because both entities are made mostly made of hydrogen and helium. Both are also roughly the same age too, eclipsing the 4.6 billion year mark in total.

Other than this, the two don’t have too many commonalties between them.

Differences Between Jupiter And The Sun

As for what the difference between the two are, they include the following:

Besides the similarities in age and composition, Jupiter and the Sun are very different from one another, whether it be the amount of energy each celestial body produces, the temperatures at which they consistently remain, even to the differences in magnetic fields and rotation cycles.

In simple terms, although grand size, Jupiter is simply another gas giant that orbits the yellow dwarf we call the Sun.