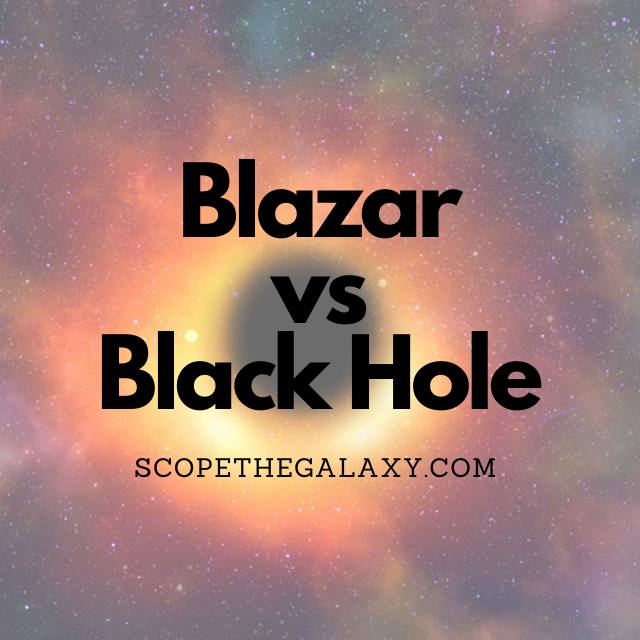 A blazar is in essence a quasar that is pointing directly towards Earth, ejecting different radio waves and even gravitational waves towards us, whereas a black hole, particularly supermassive black holes are what power blazars to shine as bright as they do and eject said particles towards Earth.

For a more thorough breakdown of what a blazar is and how black holes function along with the major differences between the two, continue reading.

These jet particles travel at the speed of light towards us, and as was discovered by the IceCube instrument, they allowed us to understand a new particle which would fall under the lepton classification, neutrinos. Much like how quarks make up the majority of matter around us, leptons like neutrinos play a part in this too.

Blazars are very similar to a quasar as they require a bucket load of material build up at the center of a supermassive black hole to form.

There will be an extremely bright excretion disk surrounding these stupendously large black holes that will eject objects at a relativistic speeds towards us, which would essentially be at the speed of light.

Blazars are also some of the oldest resources out in the universe as they allow us to observe the goings on of interstellar objects, millions to billions of years in the past whether it be through the x-rays or gamma rays projected our way, through the gravitational waves or just via the light it produces.

In essence just like any other quasar they will produce arguably the brightest luminosity in the cosmos, last for roughly 10 million years and are angled in such a way that the jet particles propelled are towards Earth.

As result of this angular disposition that blazars have, which isn’t a very normal occurrence, blazars are in turn very rare. That’s why at this moment in time we have only discovered 5.

Stellar mass black holes are formed as described above by the death of a large star collapsing inward on itself adn tend to be around 3 – 10 solar masses.

Similarities Between A Blazar And Black Hole

Blazars and black holes are both connected in the sense that, blazars require a black hole to function and ultimately shine as bright as they do.

Granted the black hole has to be many  magnitudes greater in size than those that are freshly formed after a large star has died but, the bottom line is that without a black hole, blazars are not able to exist (at least not as we know them to be today)

Both are also some of the oldest entities to exist as some blazar like entities have been observed to exist some 13 billion years in the past.

Differences Between A Blazar And Black Hole

As for what the differences are between the 2, they include the following:

Ultimately a black hole and blazar are very different entities, as a blazar is essentially a quasar meaning its more or less the hottest and brightest object in the universe and black holes conversely are amongst the coldest and darkest entities in the known universe.

They obviously do connect in the sense that supermassive black holes need to be around for blazars or any other quasar to form but, they clearly are on the opposites ends of the spectra when it comes to how they function.