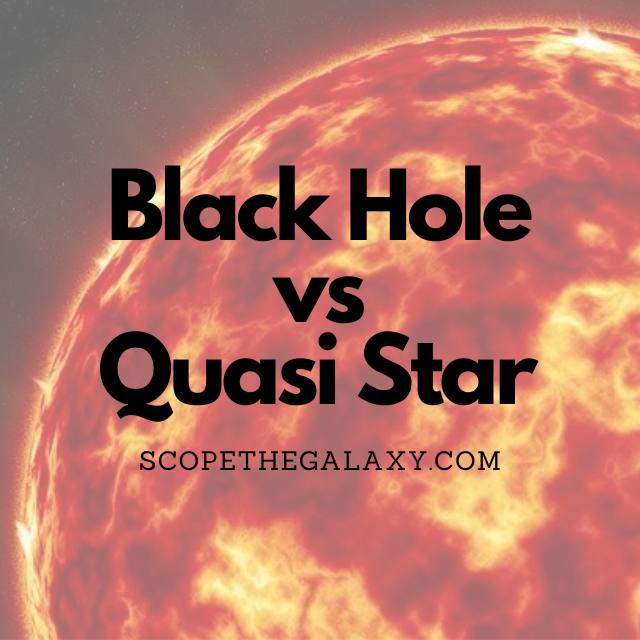 Black holes and quasi stars are two of the most intriguing entities in our Universe. Both possess unimaginable mass and gravity at their centers, which captures any material unfortunate enough to pass their event horizon. Still, they are two separate entities with some key differences.

Discover how to tell the difference between a black hole and a quasi star, and compare the size of these massive entities to objects within our solar system.

Black holes are areas of space where gravity is so strong that not even light can escape them. The reason for this immense gravitational pull is that a large amount of mass is squeezed into a tiny volume. And these mysterious entities fascinate people because they challenge our ideas of time and space.

When a massive star (one that has at least eight times the mass of our Sun) runs out of fuel, it begins to die; at this stage, the star collapses in on itself, creating a concentrated area of mass known as a stellar black hole.

Not all stars become black holes; some expand into red giants. But for those that are large enough, the core begins to collapse. First, the innermost layers are pulled into the center, followed by the outer layers. But after the initial collapse of the outer layers, they bounce back out into space as a supernova explosion.

At this stage, all that remains is the core. If this compact center possesses three solar masses or more, it can continue compacting to smaller and denser volumes. As this happens, gravity and escape velocity increase until the core becomes a black hole.

Escape velocity is the minimum speed an object must travel to escape the gravitational field of a planet or other body. The escape velocity of Earth is 11.2km/s – or 40,000 km/h – which sounds like a lot but is nothing compared to a black hole. Here, even light traveling at over one billion kilometers per hour cannot escape!

Not all black holes are stellar black holes; the most giant black holes in existence are called supermassive black holes and possess masses that equal more than 100 times that of the Sun. Scientists believe every galaxy has one of these black holes at its center, which likely formed during the initial phases of the big bang.

Because black holes suck in all matter, including light, they are entirely invisible. But, scientists can observe them by monitoring the effects of gravity on the stars and gas around the hole.

What Is A Quasi Star?

Quasi stars are hypothetical entities that help scientists to explain the formation of supermassive black holes. A Quasi star is not just massive; its scale is almost beyond our comprehension.

Take our Sun; it accounts for 99.8% of all mass within the Solar system, so to us, it’s really big. But in the context of the Universe, our Sun is just a baby, classified as a yellow dwarf. These stars are far smaller than giants, supergiants, and hypergiant stars.

The largest star we have ever encountered is UY Scuti, a red supergiant whose radius stretches 1,700 times longer than our Sun. While the width of our Sun measures hundreds of thousands of miles, UY Scuti’s width measures hundreds of millions of miles. And even this massive star would seem small if we compared it to a quasi-star.

In theory, quasi stars could inflate to sizes more than 7,000 times that of our Sun, with the largest stretching to a diameter of more than six billion miles. And size isn’t the only difference between the average star and a quasi star.

Stars, as we know them, power themselves through nuclear fusion, converting hydrogen into helium to fuel their vast masses. But quasi-stars do things a little differently.

At the center of a quasi star is a black hole that utilizes incoming matter for fuel to generate outgoing radiation, which powers the star. In this situation, the central black hole would quickly gain mass as the outer star expanded. Over time, this could create a supermassive black hole with a concentration of billions of solar masses at its core.

Is There Anything Bigger Than A Quasi Star?

Quasi stars are far bigger than any stars we see today in our Universe; still, they aren’t big enough to rival galaxies.

Galaxies are vast collections of dust, gas, and stars held together by gravity. Within these structures are billions of stars. Our galaxy has a supermassive black hole (potentially formed from a quasi star) at its center. Still, it’s too far away to be any concern for us, which gives you some idea of how vast the Milky Way is.

Still, if we’re talking about single entities, the quasi star is a “massive” contender as our Universe’s winner. The only thing bigger would be the black hole it grew into over time from the accretion of additional mass and matter.

Differences Between A Black Hole And Quasi Star

Black holes and quasi stars are two of the largest and most intriguing entities in our galaxy, but they differ from one another. Here’s why:

Black holes are invisible areas of space where gravity is so strong that nothing, including light, can escape their clutches. Stellar black holes form when dying stars collapse in on themselves. But others, known as supermassive black holes, have been around for billions of years, and scientists don’t know their exact origins.

One explanation is that quasi stars – stellar masses far larger than anything we can observe in the Universe today – formed soon after the big bang and used central black holes to accrete mass until they evolved into today’s supermassive entities.

Quasi-Stars: Black Holes at the Core of the Universe’s Largest Stars | by Ella Alderson | Predict | Medium