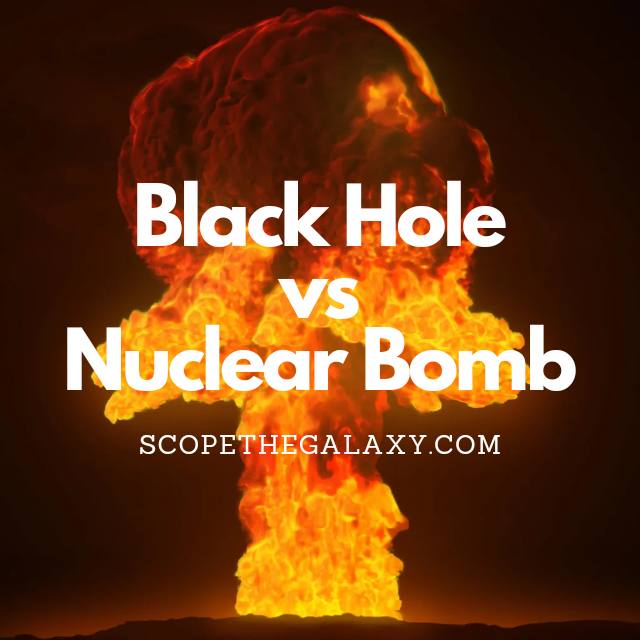 Black holes are some of the most mysterious entities in our Universe, where gravity is so strong that not even light can escape. In contrast, a nuclear bomb is an artificial weapon that uses the power of nuclear fission or nuclear fusion to create a massive explosion.

Continue reading to learn more about black holes vs. nuclear bombs. Learn what these two things have in common and what would happen if you combined them.

Black holes are locations in space where the pull of gravity is so strong that not even gravity can escape. Their gravity is so immense because a vast amount of matter is concentrated in a tiny space.

And because light is unable to escape, black holes are invisible. The only way to observe these dark space objects is by using special tools to monitor the behavior of nearby stars and other matter.

These mysterious space entities share several similar characteristics but vary significantly in size and mass. We often think of black holes as the largest entities in the Universe, but minor black holes are only the size of a single atom; still, they possess the mass of a large mountain. The smallest recorded black hole to date is the “Unicorn,” which has a mass equal to just three suns.

In contrast, the largest black holes can possess the mass of millions of stellar bodies. The supermassive black hole at the center of our own galaxy has a mass that equates to around four million suns.

Scientists group black holes into two main categories: stellar mass and supermassive. Stellar black holes form from dying stars when a massive star runs out of fuel and starts collapsing. On the other hand, Supermassive black holes likely formed at the same time as the galaxy they reside in.

Around every black hole is a boundary known as the “event horizon;” this is the point at which there is no escape, and anything that crosses the event horizon will be sucked into the mass of the black hole.

What Is A Nuclear Bomb? 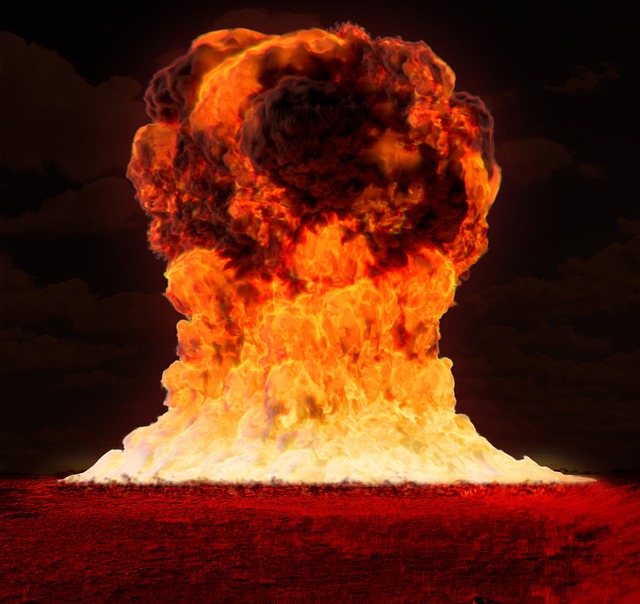 A nuclear bomb is a weapon with the ability to cause mass destruction. They utilize the forces that hold an atom’s nucleus together by harnessing the energy released when these particles are split or merged.

We can release nuclear energy from an atom in two ways – the first is nuclear fission which involves splitting an atom into two smaller fragments using isotopes of uranium or plutonium. The second way is nuclear fusion, which brings two smaller atoms together. This is usually done with hydrogen or hydrogen isotopes, producing energy similarly to the Sun.

Using nuclear fission produces an atomic bomb which harnesses the power created by splitting atomic nuclei. When a free and single neutron hits the nucleus of a radioactive material such as plutonium or uranium, it frees two or three additional neutrons, which release energy and strike more nuclei creating a chain reaction and massive energy release.

Hydrogen bombs work by nuclear fusion, which is more destructive than an atomic bomb. Thanks to the high temperatures needed to initiate nuclear fusion, scientists often term the process thermonuclear.

When nuclear weapons explode, they create a giant fireball. Anything inside the fireball is vaporized and carried upwards to create a mushroom-shaped cloud. The material within the cloud cools to small particles that drop down to Earth as fallout. And these radioactive particles contaminate anything that they land on.

What Would Happen If A Nuclear Bomb Dropped Into A Black Hole?

A black hole treats mass and energy equally, so even if you explode something within the event horizon, the black hole will absorb it and add it to the mass of its singularity.

In addition, the idea of exploding a nuclear bomb in a black hole is something of a paradox as the timer would never reach zero within the life of our Universe because of the intense time dilation. The theory of general relativity states that this phenomenon is caused by the intense gravitational field of a black hole curving space-time.

As you approach a black hole, time moves more and more slowly. For an observer, time stops once the object reaches the event horizon (but time would not stop if you were to fall into a black hole). Therefore, if we dropped a bomb into a black hole, we would never see it explode.

Can A Nuclear Bomb Create A Black Hole?

In short, no, mainly because a nuclear bomb doesn’t possess anywhere near enough energy to create a black hole. In general, a star requires a mass that’s around three times more than our Sun to have the potential to form a black hole. Still, there is some debate among scientists around the minimum amount of mass required to generate a black hole.

But even if we could create a miniature black hole through nuclear fusion, we would need an intense amount of energy to do so – like a quadrillion times more energy than the Large Hadron Collider is currently capable of producing.

Even if we could create a black hole through nuclear fusion, it would be highly unstable and likely to evaporate in less than a second through Hawking radiation.

How do nuclear weapons work? – (cnduk.org)

What would happen if we dropped a nuke into a black hole with a timer on it, set to detonate once it crossed the event horizon? : askscience (reddit.com)

Why Time Slows Down Near a Black Hole: The Physics Explained – Profound Physics