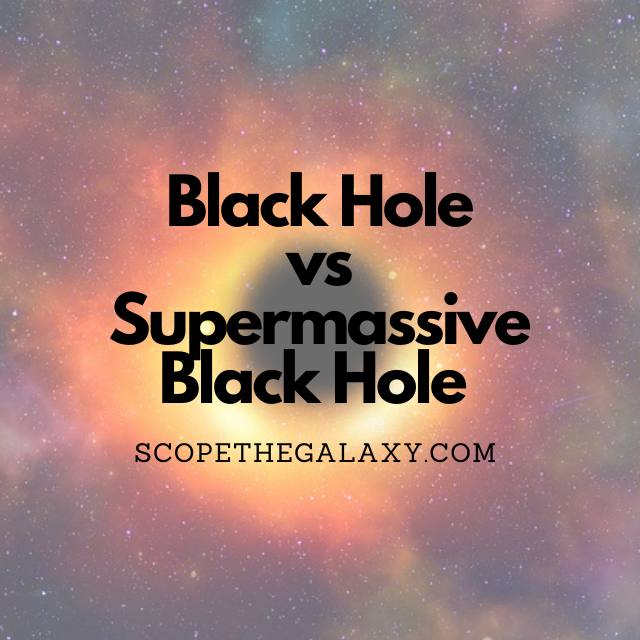 Although black holes and supermassive black holes function in a similar manner, from the way light is unable to escape its vicinity, its effects on space and time and how they both initially form from the death a larger star, there are some very obvious differences between the two.

Continue reading if you want a more detailed breakdown of both black holes types as well as the similarties and differenced between the two.

Stellar mass black holes are formed by the death of a large star collapsing inward on itself and tend to be around 3 – 10 solar masses.

They may form be acquiring stars within its reach, to grow in mass however, we do not have a ton of research on the specifics on how they acquire stars as research on these objects is still in its infancy.

As for what a supermassive black hole is and how they are formed, that’ll be discussed in more detail below.

What Is A Supermassive Black?

As the supermassive in its name would suggest, these black holes are the biggest sub type of a black hole by a substantial amount.

Supermassive balck holes are always located in the center of galaxies and happen to be very very big, with their solar masses in the millions to potentially billions.

In fact the largest black hole discovered is so big in both size and mass that it literallys makes Sagitarrius A* (the Milky Way’s supermassive black hole) that is 4.5 million solar masses and 23.5 million kilometers, look tiny in comparison.

This supermassive is found in the center of Messier 87 and is roughly 6.5 billion solar masses with a diameter at 125 billion kilometers. Considering it is 55 million light years away from us and was still the first black hole to have been photographed really shows how massive this entity truly is.

In the context of any normal galaxy, this isn’t much at all but the differences between your smaller and larger supermassive black hole is extremly vast.

Most of these black holes were formed at the beginning of the universe. This makes a lot of sense especially taking into account the closer proximity of entities back than as well as the it should logically likely take billions of year to amass as much mass they have right now.

Arguably the brightest objects in our universe, quasars, are most commonly found around supermassive black holes, espcially those that are on the more active side.

All black holes are formed in the same way initially, through the death of a large star generally around 30+ solar masses in size.

They are all extremely dense objects that allow no light to escape when within their even horizon, are able to dilate space and time, can consume other celestial objects to grow in size, and are both dark and amongst the coldest entities in the universe, where they are as close to absolute zero as can be.

It is also possible for both types of black hole to shrink in size and dissolve via the hawking radiation principle.

In the end of the day, both entites are practically the same yet, are very different due to their size discrepancies.

The main differences between the smaller and supermassive black holes include the following:

Supermassive black holes in general terms are just the biggest variant of any give black hole but, the core principles of how black holes function aren’t significantly different.

It’s just that one simply is a bloated up variation of the other, where it has had billions of years to expand through the acquisition of stars and even whole star clusters in its lifespan.