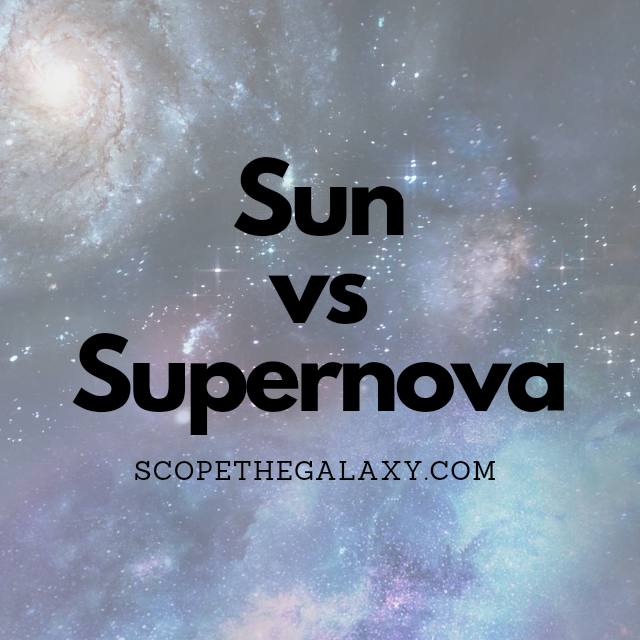 The sun and supernova are completely different from one another as a supernova is the violent explosion that occurs after a large white dwarf or large star dies, whereas the Sun is an active main sequence star. As the Sun isn’t a larger star between 8 – 50 solar masses it won’t experience a supernova explosion.

For a more thorough breakdown of the Sun and supernovae as well as the plethora of other differences between these two celestial entities, continue reading.

Our Sun is 1 solar mass, making it a medium sized medium star. It’s also on the brighter side for a yellow dwarf, the color that it emits is white in color as opposed to the slightly yellow color that less luminous yellow dwarfs would be.

In essence anything above 20 times the size of our Sun can potentially result in a black hole whilst a star that is 1.44 solar masses or between 10 – 20 times the mass of our Sun would produce a neutron star instead.

Can The Sun Go Supernova?

Theoretically speaking our Sun will not go supernova. This is because it simply does not have enough mass to constitute a violent supernova explosion. Instead it will go through its red giant phase before dwindling in size through the planetary nebula process, shedding its mass and turning into a white dwarf.

As explained above white dwarfs do have the potential to go supernova however, they also require an excess of energy, generally from another star to achieve the needed solar mass of 1.44 before it can even go through this process.

Now taking into account that the Sun is currently not part of a binary star system, it’ll be very difficult for even its stellar remnant to go supernova.

Similarities Between The Sun And Supernova

In reality the Sun and supernovae have nothing in common.

The only similarity you could say between the two is that supernovae can occur through white dwarfs which the Sun is likely to become at the end of its lifespan.

Differences Between The Sun And Supernova

In regards to the differences, they are quite vast so I’ll cover them below:

Supernova explosions and the sun are very different from one another as supernova is the conclusion to a stars active life whilst the Sun is an active yellow dwarf star. Therefore, it’ll be a constant existence for billions of years whilst a supernova will die down within a few months.

As a whole both are completely different phases within the life cycle of a star, with a supernova specifically reserved for stars roughly 8+ times more dense in mass than the Sun.