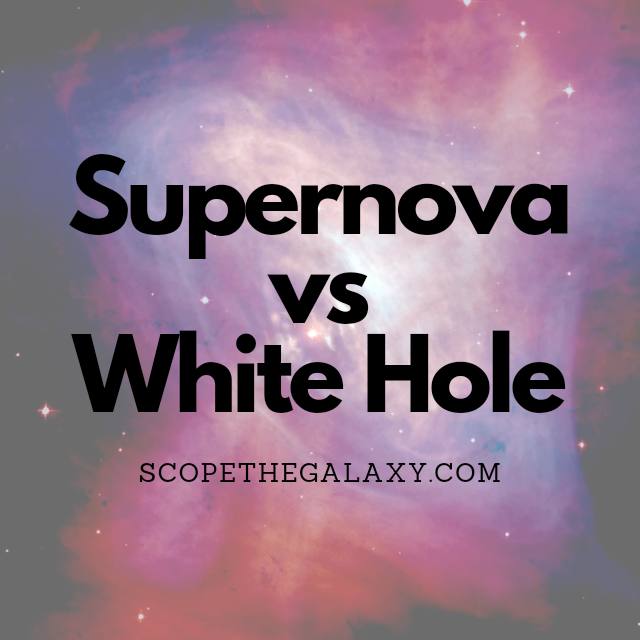 Supernovas and white holes are two of the most exciting phenomena in our universe, but the latter’s existence is only theoretical. Scientists have observed several supernova explosions, the brightest ones in the universe, but they have yet to observe any signs of a white hole.

Continue reading to discover each of these entities and how they form within our universe. Compare the two and decide for yourself whether white holes really do exist.

A supernova is an extremely bright star explosion, the biggest explosion that human beings have witnessed. There are two main types of a supernova; the first is the final stage of life of a dying star; the second is the explosion of a white dwarf.

Massive stars – those at least five times the mass of our Sun – burn incredible amounts of nuclear fuel within their core. Due to the excessive amounts of energy created in these processes, the star’s core burns at high temperatures.

Each star lives by a delicate balancing act of two opposing forces. On the one hand, the gravity of the star attempts to squeeze its mass into the smallest area possible. But opposing that force is the energy of the nuclear burn, which creates a strong outward pressure, which helps the star resist the force of gravity.

However, every star will eventually run out of fuel, and when this happens, it begins to cool, and the internal pressures drop suddenly. At this point, the force of gravity overcomes the outward pressure from the star’s core, and it begins to collapse in on itself.

This collapse happens at great speed. To put it into perspective, it’s like one million times Earth’s mass collapsing in just 15 seconds. This collapse causes an enormous explosion, throwing heat and light outward in an event that we call a supernova.

A supernova can also occur from the explosion of a white dwarf. Most commonly, this happens when two stars (one of which is a white dwarf) are orbiting one another. In this situation, the white dwarf can either collide with its sister star or pull excessive amounts of matter into its body, which ultimately causes the white dwarf to explode in a supernova.

Supernovas are relatively rare – they occur about two or three or three times every hundred years in galaxies such as the Milky Way, but they are so bright that they can outshine an entire galaxy for days or even months. During this time, they radiate greater energy than our Sun will in its lifetime.

What Is A White Hole?

In theory, a white hole is a cosmic region of space that carries the opposite characteristics of a black hole. While nothing can escape from a black hole, the reverse is true for a white hole, and nothing can theoretically enter one of these space entities.

If we could observe a white hole, it would probably look very similar to a black hole; it would have mass, it could spin, and a ring of gas and dust would likely gather at its event horizon. However, if we observed the white hole long enough, we would witness something never seen from a black hole: a mass of matter would eject from its center.

But white holes might not exist; so far, they are only a theory, and no one knows how these entities could form. Even if they did exist, they would likely have very short lifespans. As the matter was ejected from its core, it would collide with the matter orbiting the white hole, and the whole thing would collapse into a black hole.

However, thanks to Stephen Hawking’s discovery that black holes leak energy over time, there could still be reasonable grounds to believe that white holes do exist. If a black hole eventually dissolves, what happens to all the matter it swallowed? General relativity says it can’t just disappear, so it must be lurking somewhere in the universe, which could help us understand white holes.

We hear white holes discussed most frequently in relation to wormholes and time travel. Still, this theory is highly controversial as Einstein predicted that a singularity exists at the center of every black hole, and this would prevent anything from traveling through it.

Combining Einstein’s theory with quantum theory gives scientists a new way to think about this phenomenon. A white hole might not be the “exit” from a wormhole but rather a replay of the original black hole’s formation.

When a massive star collapses and forms a black hole, quantum effects around its surface could halt the collapse and, over a long period, could transition the black hole to a white hole, which then expels the original star material back into the universe.

Could A Supernova Become A White Hole?

White holes are the theoretical phenomena that still have scientists stumped. While there are several suggestions as to how a white hole forms, there is no current evidence to support any of these theories – we don’t even know for sure that white holes exist.

If white holes exist, then it’s entirely possible they could form from a supernova explosion.

Following a supernova, a super dense core is left behind; if the original star had more than ten times our Sun’s mass, this could create a black hole. And several theories suggest that these black holes could be responsible for white holes.

Differences Between A Supernova And White Hole?

In regards to.the differences between the two, they include the following:

There are still an infinite number of mysteries in our universe that scientists have yet to understand. One of these is the white hole, which may or may not exist in reality.

However, observing phenomena such as supernova explosions and black holes can help scientists to gain a greater understanding of the workings of our Universe so that we may one day find the answers to our questions.

What Is a Supernova? | NASA Space Place – NASA Science for Kids

What is a white hole? | BBC Science Focus Magazine