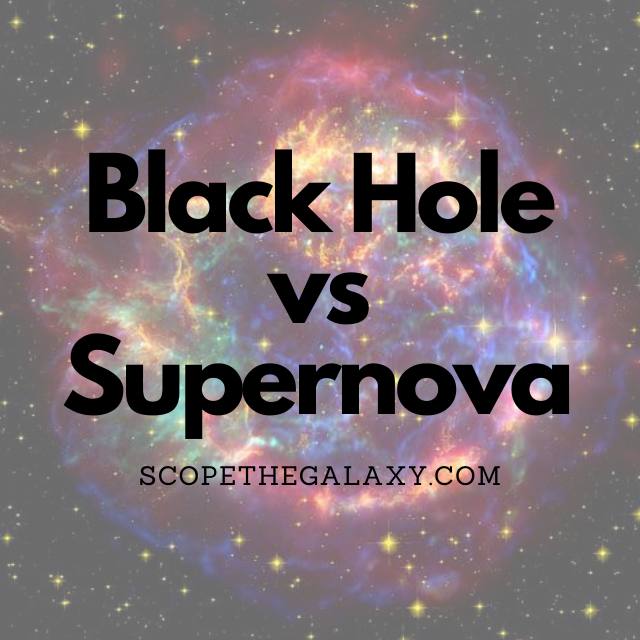 Black holes are the by product of a supernova explosion, particularly those that are 3+ solar masses in size so, even if the two are connected in the sense that they both form when a star is essentially dying, you wouldn’t be able to classify them within the same celestial bracket.

Black holes are amongst the darkest entities in the universe whilst supernovae are so bright that they can even outshine entire galaxies. Black holes are so dense that light cannot escape its grasp. They’re very cold being just shy of absolute zero whilst a supernova can burn at a 1 billion+ degrees Celsius.

The main difference you could say is that a black hole is the darkest and densest entity in our universe whilst supernovae are amongst the brightest most grandiose explosion in our universe.

Throughout the remainder of this article I’ll be going over the similarities and differences between black holes and supernovae so, continue reading if you want a more thorough breakdown of both entities.

A black hole is created when a large star about 3 solar masses large collapses below its Schwarzschild radius causing a supernova explosion. The density of the star creates a massive gravitational pocket and pulls everything within its vicinity into it.

In essence anything above 20 times the size of our Sun can potentially result in a black hole whilst a star that is 1.44 solar masses or between 10 – 20 times the mass of our Sun would produce a neutron star instead.

What Would Happen If A Black Hole Ate A Supernova?

If a black hole were to consume a supernova (which is very very unlikely), there would be two likely scenarios that occur. One where the explosion would be inside the black holes event horizon and the second would be when it isn’t.

If the supernova is inside to the event horizon of a black hole, despite the supernova being the brightest entity for a brief moment in time, black holes do not allow even a single inch of light freedom in its domain therefore, it would essentially drown any form of light when in its presence.

Within the event horizon, the supernova will basically bend around the black hole and steadily be drawn into the gravity of the black holes which have among the strongest gravity in the universe, particularly when measured at the singularity.

On the other hand, if the black is outside the event horizon, the light would bend around the black hole distorting your view of it. This is despite the strength of the black holes gravity.

Similarities Between A Black Hole And Supernova

Supernovae and black holes are very different from each so there isn’t many commonalities between the two but, the one thing that they do have in common with each other is that they’re both formed when a star has reached the end of its lifespan, where black holes are simply the aftermath of the violent supernova explosion.

Differences Between A Black Hole And Supernova

As for the differences, there are a whole plethora that can be listed. These would include the below:

Supernovae can result in a variety of different dead variations of a star whether a white dwarf, neutron or the densest entity of all of them, the black hole. Although supernova explosions are short lived, when they do happen, it will certainly leave a lasting expression on those who view it considering its luminosity typically supersedes the brightness of entire galaxies.

They’re extremely hot to put it lightly whilst black holes are so cold they are just shy of absolute zero. Both celestial entities are completely different from one another even if the core principles to create them fall under the same umbrella of a star dying.