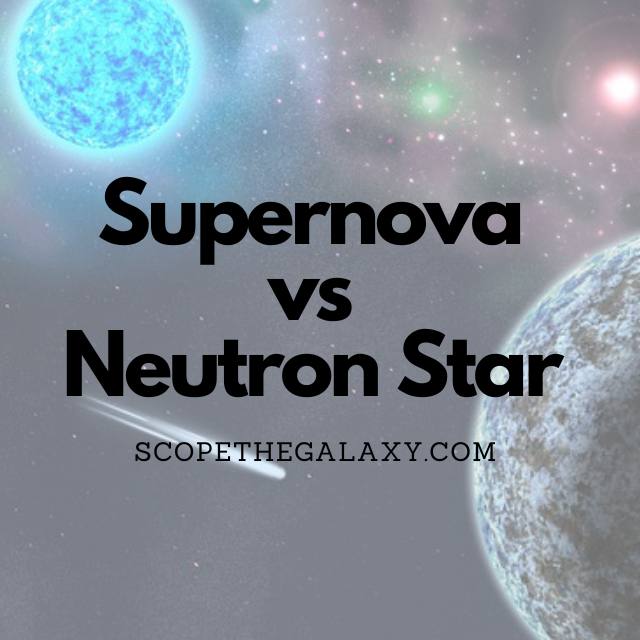 Supernovae and neutron stars are interconnected as one precedes the other. Supernova explosions are simply the phase just before a neutron star is formed.

The main differences between the two are that supernovae are over 100 times hotter, they’re many time larger in size and can also create black holes depending on the solar mass of the exploding star. Neutron stars are more dense, have a lifespan potentially 100 billion times longer and are the stellar remnants of a dead star.

For a more thorough breakdown of both entities, the similarities between the two as well as the plethora of other differences between them, continue reading.

Type 2 supernovae are formed when a star between 8 – 50 times the Sun’s mass collapses into itself and causes a huge explosion that produces a black hole in most cases. This is because black holes require an explosion from a star to leave behind at least 3 solar masses of materials.

When a star 10 to 20 times more massive than our own sun or more massive than the Chandrasekhar limit of 1.44 solar masses, reaches the end of its life, the core collapses, and the outer matter explodes in a supernova. A neutron star is what would remain at the center of the explosion.

Neutron stars can come in two main varieties, acting either as an active pulsate pulsar or a or the more erratic and powerful magnetars.

Is A Neutron Star Bigger Than A Supernova?

No, a neutron star will never be bigger than the explosion that makes it. These entities will typically be around 15 – 25km in size which in the grand scheme of the entire universe is miniscule whilst supernova explosions literally expand at many times that (between 15,000 to 40,000 km per second).

Considering the density and magnetic fields of neutrons stars, it only makes sense that such as massive explosion would be necessary in order to create them.

Similarities Between A Supernova And Neutron Star

Other than the fact a supernova explosion is the phase the precedes the creation of the neutron star, the two entities are very different from one another, whether it be size, temperature and a multitude of other reasons, of which I’ll be going over below.

Differences Between A Supernova And Neutron Star

The differences between a supernova explosion and a neutron star would include the following:

In short, the only way a supernova and a neutron star connect is through how one just occurs before the other is created. Other than that, neutron stars are a compressed, densely packed collection of neutrons whilst supernovae are bright, scorching hot, freeform dust clouds spread across their outer space region.

They are just very different entities from each other even if they are both phases that a star will go through.