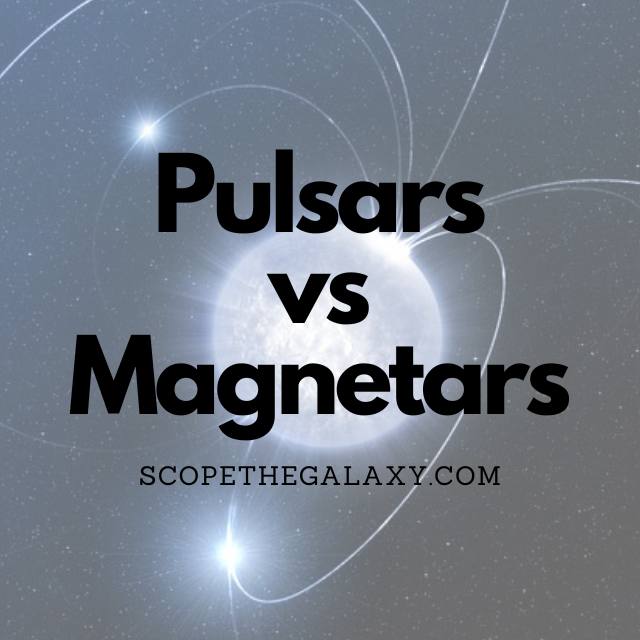 Pulsars and Magnetars are both the remnants of a dead star, specifically those that die after a supernova explosion. The main difference between the two is that magnetars have a magnetic field roughly 1000 times stronger than pulsars.

There are also other differences such as their difference in lifespan, the strength of rays that they both emit etc. If you want to learn the differences between the two more thoroughly, continue reading.

Pulsars in essence are extremely fast rotating neutron stars that emit regular pulses of radiation within the span of seconds and even in the lower millisecond range.

The reason pulsars flicker is due to the immense strength of their magnetic field, which has been observed to be 10,000,000 T (teslas), which is a number so large that it can literally warp space and even dilate the time around them, like a black hole.

As the neutron star in this case rotates so quickly, it will open and accelerates charged particle at speeds so fast that 2 beams of extremely powerful electromagnetic waves will jet out from both its north and south magnetic axis.

If the neutron star was initially a part of a binary star system, it’s very likely that it’ll remain in orbit with the other star, using some of its energy and matter to oscillate at a much faster rate. Overtime pulsars will slow down as a result of their surroundings but, the oscillation intervals will remain consistent throughout.

Pulsars make up the majority of neutron stars we’ve discovered and will typically emit radio ways, with occasional the gamma or x-ray that is discharged also.

What Is A Magnetar?

Magnetars are simply put, neutron stars that are significantly more powerful than pulsars as they emit radiations that are a step above, emitting gamma and x-rays off its surface.

Just like pulsars magnetars are extremely small but dense, where on the upper end of their size they are roughly 24km with mass 1.5 times that of the Sun. In layman terms this means that these stellar remnants are heavier than a motherfu… you get the idea.

Although magnetic fields are more erratic than the above neutron stars, we’ve only managed to discover 31 different magnetars.

Of course based on the vastness of space, the true number is likely to be many thousands to millions times more but, it is an interesting fact nonetheless, considering how erratic these stars can be.

In regards to how strong the magnetic field of these stars are, imagine how your typical neutron star/pulsar is able to dilate time and space around but magnify that by a 1000.

Based on these numbers you could say that magnetars have arguably the most powerful magnetic fields (that we’re aware) in our universe.

It’s believed that the magnetar like state only sustains for around 10,000 years after which their magnetic field become weaker and the x-ray and gamma ray emission cease to be.

Although not confirmed the discovery of the 31st magnetar called J1818.0-1607 appears to act as both a magnetar and pulsar implying magnetars might eventually become pulsars.

Black holes may give it a run for its money but, magnetars are still amongst the top dogs, at least when it comes to the strength of magnetic fields in our universe.

To put this into perspective in 2004, rays from a magnetar roughly 50,000 light years was able penetrate deeply into Earth’s ionosphere, which is the electrically conductive layer encircling Earth.

Similarities Between Pulsars And Magnetars

Pulsars and magnetars are similar in many ways, which would include the following:

Differences Between Pulsars And Magnetars

Although both entities are the remains of a dead star and fall under the neutron star umbrella, there are a good number of differences between the two:

In summary, magnetars are just pulsars but on steroids. They can be upwards of 1,000 times stronger and as a result will have a far stronger influence on its surroundings.

However, as their flames burn so bright, they do dwindle in power over time where the strength of a magnetar can diminish within a short 10,000 years whereas pulsars continue chugging anywhere from 10 – 100 million years.

2 thoughts on “Pulsars vs Magnetars (How Are They Different?)”