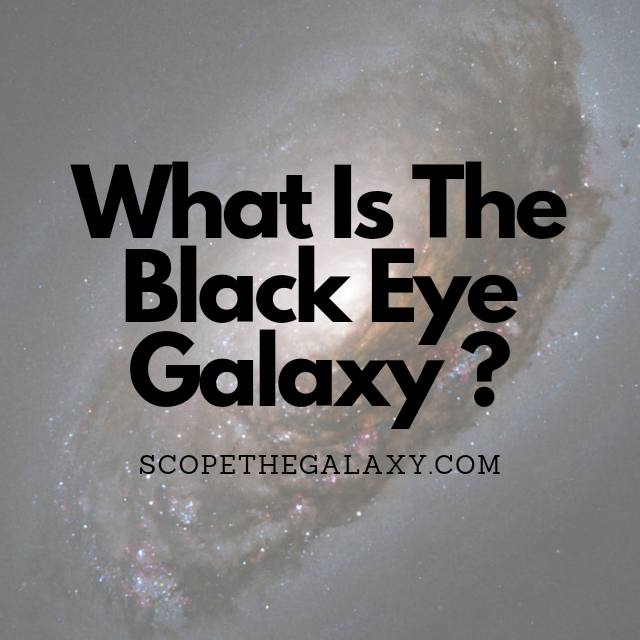 The Black Eye Galaxy is a barred spiral galaxy that lies 17 million light-years away from Earth. It gained fame after its discovery in 1779 for its unique “eye-like” appearance caused by a dust band that partially covers the galaxy’s nucleus. And the unique nature of this formation doesn’t end there.

Who Discovered The Black Eye Galaxy?

Two astronomers made independent discoveries of the Black Eye Galaxy in 1779. The English astronomer Edward Pigott made the discovery in March of ’79, while German astronomer Johann Elert Bode made his observations in April of the same year.

Science credits the discovery to the English astronomer Edward Pigott as he was the first to observe this interesting galaxy. But there are many sources that credit either Bode or the French astronomer Charles Messier as they published their discoveries before Pigott.

The discovery by the latter remained relatively unknown until 1781, when he read it before the Royal Society of London.

Pigott never experienced the acclaim of other astronomers, even though he is also credited for discovering the first Cepheid. This variable star possesses a regular cycle of brightness whose frequency relates to luminosity, making it possible to estimate its distance from Earth.

Astronomers estimate that there are more than 100 billion stars in the Black Eye Galaxy, and it possesses a diameter of around 54,000 light-years across.

The Black Eye Galaxy, also known as the M64, the Sleeping Beauty Galaxy, or the Evil Eye Galaxy, is a pretty isolated spiral galaxy around 17 million light-years away from Earth. The reason for the various names of this galaxy is that it possesses a dark band of absorbing dust that lies partially in front of its bright nucleus.

M64 stands out from many others thanks to the unique blackness that envelopes a significant chunk of the galaxy, making it look like an eye.

Another characteristic that makes this galaxy stand out is its bizarre internal motion – the gas lying in the galaxy’s outer regions rotates in the opposite direction to the gas and stars of the inner area.

Scientists think that this strange behavior lies in M64 merging with a satellite galaxy more than a billion years ago.

What Type Of Galaxy Is The Black Eye Galaxy?

A spiral galaxy is easily recognizable thanks to a wide, flat disk of rotating dust and gas. Some spirals possess broad arms, while others have arms that are more tightly bound.

An elliptical galaxy is so-called because of its oblong shape. These galaxies possess a lack of overall structure and can range from almost spherical to cigar-like in form.

A peculiar galaxy is composed mainly of empty space and possesses an unusual shape, size, or composition.

A barred spiral galaxy possesses a central bar-shaped structure composed of millions of stars. Bars like this reside in up to 65% of spiral galaxies and affect the motion of the stars, gas, and dust within the bar.

Many scientists believe that these bars act similarly to a funnel by pulling matter from the bulge to the disc. This leads to the formation of a starburst in the galaxy’s center.

Can You See The Black Eye Galaxy From Earth?

Although M64 is more than 17 million light-years from Earth, it has an apparent magnitude of 9.8, and scientists can observe it with a moderately sized telescope. It is easiest to spot during May.

New stars form from the compression and contractions in the area where oppositely rotational gases collide. They are evident in Hubble images of the galaxy, where we can see hot, blue, newly formed stars alongside glowing pink clouds of hydrogen gas that fluoresce from their exposure to ultraviolet light.

The galaxy is famous for the vast light-absorbing dust band across its central region, obscuring the stars in the galaxy’s core. But it remains a popular target for amateur astronomers because you can see it through a small telescope or even binoculars.

It is not the most accessible galaxy to locate, and you will need to look carefully 19 degrees west and slightly north of Arcturus – the fourth brightest star in our night sky.

Thanks to its eye-like appearance and opposing rotational forces, the Black Eye galaxy is a unique and exciting formation. Though the absorbing dust partially covers its starbursts in front of the galaxy, it is still easy to spot if you know where to look.

This galaxy is popular with amateur astronomers as it is relatively easy to spot and provides a unique galaxy formation to admire.