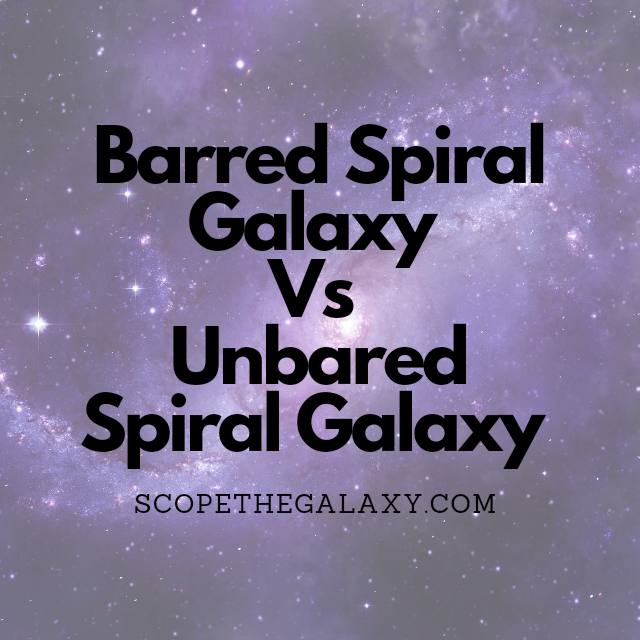 The main difference between a barred spiral and unbarred spiral galaxy is the large bar that runs through the center of the former. While the structure of both galaxies is largely similar, this elongated bar suggests that the galaxy is a more mature version of the spiral galaxy.

Continue reading to learn about the similarities and differences between barred and unbarred spiral galaxies.

What Is A Barred Spiral Galaxy?

Spiral galaxies are flat, rotating disc composed of gas, dust, and stars. A barred spiral galaxy is that which has a bar-shaped structure made from stars at its center. Edwin Hubble first discovered these galaxies in the early part of the twentieth century, and scientists use the classification SB to differentiate them.

And we can break this classification down even further. An SBa galaxy contains very tightly bound arms, whereas an SBc galaxy has significantly more loosely bound arms.

As many as 65% of spiral galaxies contain bars; these affect the movement of the gas, dust, and stars that surround them. Scientists believe the bar acts similarly to a funnel, pulling matter into the disc’s bulge. This leads to starbursts in the center of the galaxy.

The central bar in a galaxy provides information about the age of that galaxy, with scientists estimating that a bar takes around two billion years to form. Our galaxy is a barred spiral; while the largest Barred Spiral that we can see is the Condor Galaxy, found in the Pavo constellation.

The so called “bar” isn’t a solid object. Instead, its formation is due to a range of unstable stars at the center of a galaxy that give the appearance of a solid object thanks to their high density.

What Is An Unbarred Spiral Galaxy?

An unbarred spiral galaxy is a variety of spiral galaxy that lacks a central bar; scientists use the classification SA to differentiate them from other galaxy types.

The arms of a spiral galaxy contain numerous amounts of gas and dust, plus a range of young stars that shine brightly but briefly. The formation of spiral arms remains to be something of a puzzle for scientists. One theory is that high-density waves traveling through the outer disc could be responsible for these formations, but no one knows.

Scientists also believe that spiral galaxies eventually evolve into elliptical galaxies as they age. But the latter is difficult to measure thanks to their abundance of older, dimmer stars that give them less visibility in the night sky.

The bigger a galaxy is, the faster it will spin, with the arms of a large galaxy spinning at up to two million kilometers per hour.

The Similarities Between Unbarred And Barred Galaxies.

The physical structure of barred and unbarred galaxies is similar in many ways. Most spiral galaxies possess a bulge at their center, with a rotating disc of stars surrounding it. Both galaxies have a defined shape, which bulges in the middle.

Another characteristic shared by both types of galaxies is that the older stars reside closer to the nucleus, while the younger stars spread out across the arms. Stars contained in the bulge of a spiral galaxy tend to be redder (as well as older) than the rest. This bulge is created by an incredibly dense nucleus that draws matter into its center.

Scientists classify unbarred and barred galaxies by how tightly the spiral arms are wound. SAa or SBa galaxies are those that possess tight arms, whereas a SAc or SBc galaxy is one with a loose formation.

While a barred spiral galaxy holds many of the same characteristics as an unbarred spiral galaxy, there is one obvious difference. The barred galaxy has a huge bar running through its center that affects everything from the movement of the stars to the arms of the galaxy’s spiral.

2008 studies demonstrated that barred spiral galaxies are the older of the two types as a central bar indicates that a galaxy has reached its full maturity.

A barred galaxy forms when the orbits within a spiral galaxy become unstable and deviate from their circular path. These divergences in the star’s orbit gradually elongate its path, which eventually locks into a bar.

A bar is thought to be the last significant process of a spiral galaxy which forces a large amount of gas towards its center while fuelling the formation of new stars and feeding supermassive black holes.

Barred and unbarred spiral galaxies share the same basic shape and many of the same characteristics. They have a large central disc, around which massive arms of gas and dust swirl.

The difference between the two is the presence of a large bar. This bar is formed due to the unstable nature of the orbits within that galaxy and signifies that the galaxy in question is older than an unbarred spiral galaxy.