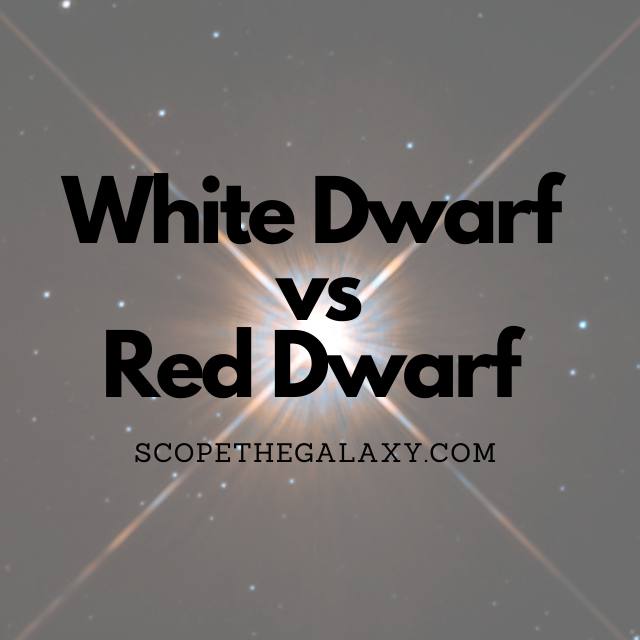 A White Dwarf is the final evolution in a star’s life cycle and one of the densest objects in the known Universe. A red dwarf is a low mass and low-density star whose low fusion rates emit only a faint amount of light.

Continue reading to discover everything you want to know about white and red dwarfs. Discover the similarities and differences between these two types of stars and why the transformation of a red dwarf into a white dwarf is only theoretical.

A white dwarf is a “small” star that has exhausted its supply of nuclear fuel and thus, reached the end of its life. As its nuclear energy burns out, this star expels most of its outer material to create a planetary nebula – a luminous ring formed by the matter ejected from the hot star.

Small stars (such as our own sun) spend most of their lives balancing gravity with outward gas pressure. Thanks to more than an octillion tons of gas pressure on the stellar core, temperatures, and density are high enough to host nuclear fusion.

Eventually, the star runs out of its hydrogen supply. At this point, the star begins to fuse helium into oxygen and carbon. As hydrogen fusion expands into the shell, the star grows bigger until it can longer hold itself together against the incredible gravitational pull.

The only remaining part of the star is its boiling core. This becomes a white dwarf, still possessing a temperature of more than 100,000 kelvin, which gradually cools over the next billion years.

The average white dwarf is slightly bigger than earth but almost 200,000 times the density. To put that into context: a teaspoon of white dwarf matter would weigh the equivalent of an elephant on earth.

Some estimates suggest that up to three-quarters of the stars in our solar systems could be red dwarfs – yet none are visible to the naked eye.

In short, yes. But at the same time, no red dwarfs in the Universe have yet to make this transformation, and there’s a very simple reason why.

Once a red dwarf burns through its fuel supply, nuclear fusion is no longer possible, and the star begins to expand. At a certain point, gravity rips away the outer parts of the star, leaving only the dense core – or white dwarf – behind.

While we see this process in an array of stars, scientists are yet to witness a red dwarf become a white dwarf. The reason for this lies in the time it takes a red dwarf to burn through its fuel. Many stars, such as our sun, shine brightly and burn through their fuel in “just” a few billion years.

However, because a red dwarf is so much dimmer and expends far less energy, it doesn’t run out of fuel for at least a few trillion years. When you consider that the Universe is only 14 billion years old, you see that these stars are still infants in their own life cycle.

Similarities Between White And Red Dwarfs.

White and red dwarfs are both types of stars. A white dwarf describes the state in which a star has reached the end of its life cycle, while a red dwarf describes a low mass and density star whose nuclear reactions take place over trillions of years.

The other commonality between these two dwarfs is that they shine less brightly than other stars in the sky. The white dwarf loses luminosity because nuclear reactions are no longer taking place in its core. Instead, its only remaining light comes from the excess heat energy of the core.

And red dwarfs are classified for their lack of light due to much lower forces in the star’s core.

Differences Between White And Red Dwarfs.

While and Red dwarfs are both stars that produce a dimmer light than the other stars in the Universe – and a red dwarf will ultimately transform into a white dwarf. But that is where the similarities end.

A white dwarf is one of the densest objects in the entire solar system, the only object that possesses a greater density is a neutron star. In contrast, red dwarfs are categorized by their low mass, making slower reactions possible.

A white dwarf is the final evolution of a star, whereas a red dwarf is still in the prime of its life and has yet to transform into a white dwarf.

If the Universe allows, all red dwarfs will eventually transform into white dwarfs, which ultimately finish their lives as black dwarfs.

Red Dwarfs: The Most Common and Longest-Lived Stars | Space

Red Dwarfs: The Most Common and Longest-Lived Stars | Space

What is the difference between a red dwarf and a white dwarf star? | Socratic

How bright is a white dwarf? | Study.com