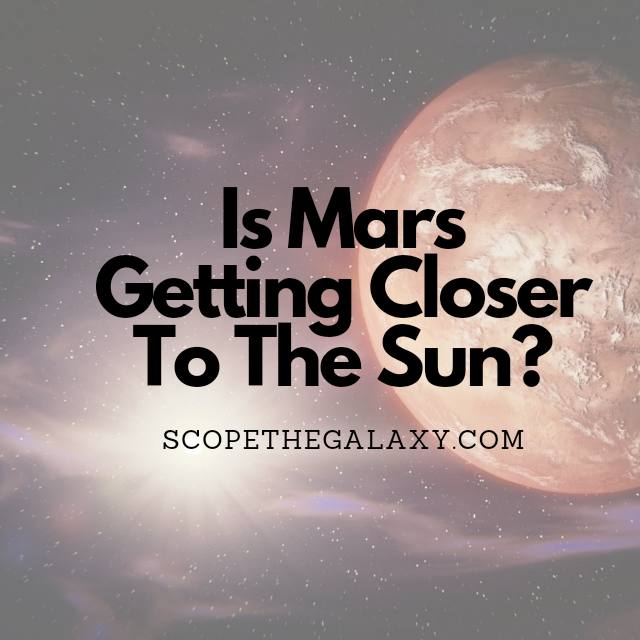 Mars does get closer to the Sun thanks to an elliptical orbit which provides it with both perihelion and aphelion phases. A number of factors affect the orbit of Mars, most significantly, the gravitational pull of the Sun and Jupiter.

Continue reading to discover how and when Mars moves closer to the Sun, plus the closest the red planet ever gets to Earth.

How Would Mars Get Closer To The Sun?

Several factors affect Mars’s orbital path and its distance from the Sun. Were each planet to have a rounded orbit, their distance from the Sun (and other bodies) would remain constant. However, each orbit is egg-shaped or elliptical, which means the distance between bodies varies.

Additionally, there are a number of factors that can influence the orbital path of a planet. One of these is the gravitational influence of other planets. In Mars’ case, the orbit can experience a fairly significant influence from the gas giant, Jupiter.

Mars completes its elliptical orbit over 687 Earth days (one Mars year); its perihelion occurs once every two Earth years. Mars reached its last perihelion on June 21st, 2022, and its next will be on May 7th, 2024.

While all of the Milky Way’s planets possess a slightly elliptical orbit, Mars has a significantly elliptical one. This means that its distance from the Sun varies much more than some other planets.

Mars’s distance from the Sun varies by more than 20%, which means that during aphelion, the red planet receives 31% less light and heat from the Sun than it would at perihelion.

If Mars were pulled closer to the Sun, it would have to increase its orbital speed to maintain the perfect balance required for orbit. In theory, if Mars moved closer to the Sun at its current orbital pace, the gravity of this vast star would overcome the planet’s mass and suck it into a fiery death.

However, speed the orbit up too much, and you risk releasing the planet from the Sun’s gravitational hold, inadvertently catapulting it into deep space.

Is Mars Getting Closer To Earth?

As with every planet in our solar system, both Mars and Earth continuously travel in an orbit around the Sun. Earth has closer proximity to the Sun than Mars, which means that its orbital path is shorter, and the increased gravity from the Sun makes us travel faster.

This means the Earth makes an average of two complete orbits of the Sun for every single trip completed by Mars. It also means that sometimes these two planets are much closer together than others.

The most significant difference between these two bodies occurs when both are at aphelion, and each is on an opposite side of the Sun. During these times, the distance between Mars and Earth can be as much as 401 million kilometers.

Mars is not “getting closer” to Earth, but it could still move closer than ever before during an orbital cycle. To date, the closest recorded distance between Mars and Earth is 56 million kilometers, which occurred in August 2003; scientists at NASA predict this won’t happen again until 2237. These events are known as “close approaches” and are pretty rare phenomena.

In theory, the closest that Mars could ever get to Earth is 54.6 million kilometers. This would happen if Mars were at perihelion (its nearest point to the sun), and the Earth could “catch up” to it in aphelion (its farthest distance from the Sun).

When the Earth catches up with Mars, they are both positioned on the same side of the Sun; this is known as opposition. Opposition refers to a phenomenon where Mars and the Sun sit on opposite sides of Earth. If we look to the sky during this time, we can see Mars rise in the east and set in the west, just as the Sun rises in the east.

Were the orbits of Mars and Earth circular, then the opposition would be the closest that these two bodies ever came to each other. Still, we know more factors at play influence each planet’s distance from the sun at any given time.

An opposition occurs about once every 26 months, but it takes around 15-17 years for an opposition to occur during Mars’ perihelion.

Does Mars Ever Get Closer To The Sun Over Earth?

The distance from the Sun varies on both Mars and Earth, with both experiencing a perihelion and an aphelion. At our closest point, we are 147.1 million km from the Sun (our farthest is 152.1 million km).

In contrast, Mars can travel as far as 249 million km away from the Sun but only ever gets within 206 million km, even at its closest point.

This means that even at its closest point, Mars is still almost 60 million km further from the Sun than Earth at its most distant location.

Mars does move closer to the Sun, but not in a “the Sun’s going to swallow it” kind of way. Instead, the phases of moving closer and further away from our bright star are controlled and relatively consistent. We can even calculate the exact moments Mars will be at its closest point to the Sun.

Mars is closest to the sun today | Astronomy Essentials | EarthSky