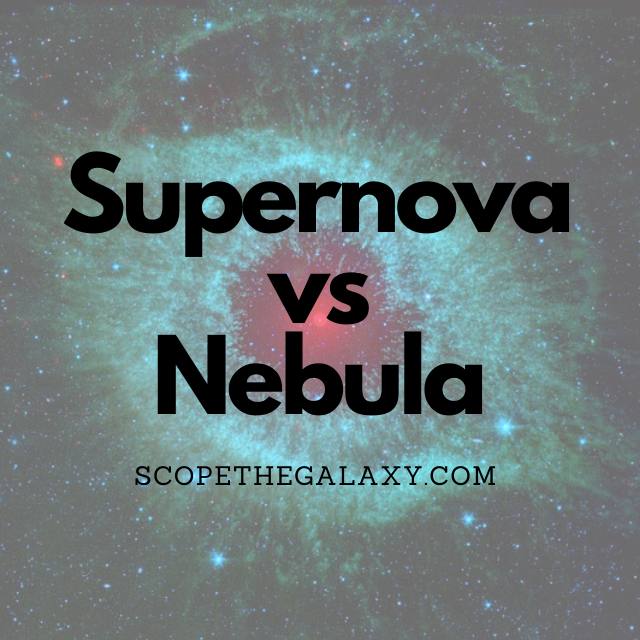 The main difference between a nebula and a supernova is that supernovae are formed when larger stars around 8+ solar masses or 1.44 solar mass white dwarf explodes, whereas nebulae are the dust cloud remnants of all dying stars (made mostly of hydrogen and helium) that are scattered across space and able to create new stars.

There are a variety of other differences between the two interstellar entities so, continue reading if you want a more detailed breakdown on supernovae and nebulae.

Black holes are what remains after a supernova explosion occurs, which in turn means that this explosion is the process followed when a star explodes.

These are theorised to form after a white dwarf, likely in a binary star system, exploding due to the over consumption of energy from its companion. Type Ia’s have a strong silicon absorption line near its maximum luminosity whilst producing no hydrogen at the same time.

Type Ib’s are formed after a large star collapses under its own core gravity where the outer region of the stars hydrogen is stripped away, leaving behind only second layer of helium.

In essence anything above 20 times the size of our Sun can potentially result in a black hole, whilst a star that is 1.44 solar masses or between 10 – 20 times the mass of our Sun would produce a neutron star instead.

Just like the components of their dead star counterparts these dust clouds will be made out of the elements hydrogen, helium and a number of other ionised elements spread across their local region of space.

Does A Supernova Create A Nebula?

Yes, supernova explosion do create nebulae however, these violent explosions are not absolutely necessary for these giant dust clouds to form.

As long as a star is dying, hydrogen and helium based nebula will continue to form after they’ve entered their stellar remnant phase.

Similarities Between A Supernova And Nebula

Other than that, there isn’t much that is similar between the two.

Differences Between A Supernova And Nebula

As for the differences between supernova explosions and nebulae, they include the following:

Supernova explosions create nebulae but they don’t form all nebulae as larger stars aren’t the most abundant entities in universe. As a result most lower mass stars like the Sun will shed the weight in a far gentler manner, going through the process of a planetary nebula.

Either way, both phenomena are created when a star is dying therefore, supernovae will almost always leave behind a giant dust cloud (mostly consisting of hydrogen and helium) as supernovae require stars to essentially die before it can occur.