There are a few different sub variations to a compound/catadioptric telescopes but the ones most modern systems use are the Schmidt-Cassegrain (SCT) and Maksutov-cassegrain (Mak) optics.

The reason you’re here right now is likely so you can understand what separates the designs from each other and ultimately learn which optical variation will be better for specific scenarios.

In short, a Maksutov-cassegrain telescope is generally better for planet viewing due to the narrow and generally large focal ratios, however this also does compromise the astrophotography performance of Mak telescopes, which is an area Schmidt-Cassegrain telescopes don’t suffer nearly as much from whilst still having plenty of ability when viewing planets.

That’s the difference in short but I’ll break down everything else in a little more detail so that you can understand these optics more.

The simple answer is because both the Mak and SCT use the same variation of optics, which as I mentioned above are known as compound optics.

These optics are also commonly regarded as a hybrid of the other 2 variations namely reflector and refractor optics. This is because compound telescope tend to use a concave primary mirror that goes across the bottom plane of the telescope, whilst the secondary mirror incorporates a convex design on which the light bounces on the secondary spot on the mirror and through the hole in between the primary mirror.

The image above basically shows how this process occurs.

One thing to note about pretty much any cassegrain design is that the primary mirror they use is spherical in shape as opposed to parabolic, meaning the images you’ll see will typically showcase spherical aberration.

These issues are mostly fixed through the use of a corrector lens, which also appears to fix the newtonian reflector issue too, being diffraction on the brighter objects in space.

This is because there is less light obstruction due to cassegrains not needing a secondary mirror spider mount to function as an effective telescope.

Another aspect of the cassegrain design that both an SCT and a Mak share is the way that you have to go about focusing the image in the viewfinder.

Unlike refractor and reflector system where you’d need to move the draw tube with the eyepiece going in and out, cassegrain systems tend to have a stationary eyepiece compartment. What this means is that when ever you attempt to focus a cassegrain system, you’ll be moving the whole primary mirror up and down inside the tube.

This used to be a huge problem when it came to focusing cassegrain telescopes back in the day due to the mirror needing realignment whilst focusing however, since implementing a mirror lock feature to prevent the issue, collimation and focusing doesn’t seem to cause too many issues anymore.

Anyhow these are the similarities when it comes to both devices but now, I’ll go over what a SCT and Mak system and outline out their core differences.

What Is A Maksutov-Cassegrain Telescope? 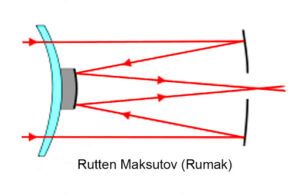 As you know the Mak design is also a compound based system meaning it uses both a lens and a mirror. Maks have a more reflector based design but use corrector lenses to eliminate any kind of aberration that would normally occur due to a pure mirror design.

This means that the reflected light will be folded in Maks resulting in a focal length much longer than what a refractor or a reflector telescope of the same size would produce.

In general Maks tend to produce focal lengths 5 – 7 times larger than other telescopes at the same size and dimensions. This is mostly due to the convex design of the secondary mirror which is found right at the front of the tube.

The convex secondary lens, simply put, manages to magnify the focal length so instead of being only 2 times the as the light is folded once in the process, the lens magnifies the length multiple times over.

The extreme focal length in turn allows for Maks to be really good telescopes for viewing planets as narrower images are better for viewing more detail on singular entities like Jupiter or Saturn.

What Is A Schmidt-Cassegrain Telescope? 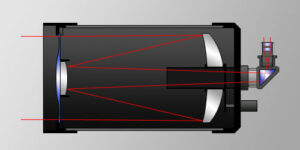 SCT telescopes are the more commonly used compound based telescopes whilst also being more expensive. As to why, it’s mostly due to these systems being lighter when fully formed and much better for other telescopic activities such as astrophotography.

The whole process works very similarly to a Mak device besides the corrector lens used and the size of the secondary mirror being slightly bigger (at least according to the diagram) resulting in a slightly different process within the tube.

The light passes through the corrector plate, hits the concave primary mirror, which then reflects off the convex secondary mirror and into the hole in between the primary, which in turn is either captured by an eyepiece or camera.

The focal length within a SCT is also longer due to the convex secondary mirror effectively magnifying the size, which tends to be roughly 5 times longer than the size of the tube. Even though that is very long, the focal length of An SCT is also generally smaller than what Maks at the same size can produce.

What’s The Difference Between A Maksutov-Cassegrain And Schmidt-Cassegrain Telescope?

The main difference between a Mak and SCT design is the corrector lens placed in front of each of these devices. The reason for the corrector lenses in both systems is so that aberration can be eliminated when light passes through.

Corrector lenses are also a cheaper option then what’s offered by classic cassegrain systems which require the use of aspherical mirrors to try and eliminate the aberration. Of course not using a corrector lens will allow a telescope to produce better imagery but, it also means said device will be extremely expensive.

Anyhow, the differences between the two corrector lenses are that the Mak uses a highly curved spherical lens whilst a SCT uses a corrector plate that’s flat with a very slight aspheric curve (the SCT  diagram exaggerates the curve but it is very slightly aspherical).

As SCT’s have 2 spherical mirrors within, they also tend to suffer from Coma therefore, SCT telescopes tend to use a fairly flat and thin corrector plate in order to correct coma along with other forms of aberration.

Maks on the other hand tend to use a thicker corrector lens at the front (about 10% per aperture compared to a SCT’s 3% per aperture) which means that Maks will take longer to achieve optimal thermal levels when used outside. This of course is further amplified the larger your Maks lens is.

This is also the reason why Maks tend to produce much higher focal ratios for the size of the device meaning they’re generally much better when it comes to observing planets. Furthermore, the thickness of the corrector lens also results in slower light gathering abilities for the Mak making them far from ideal when it comes to astrophotography, where SCT’s tend to do a lot better.

Generally speaking SCT’s are far more versatile in their uses over Maks as they can do equally as well with astrophotography, viewing planets and other deep space objects.

Of course Maks that are equivalent in power to a SCT will generally do a much better job when it comes to viewing planets and other objects on space but, they’re also way more expensive.

Both designs are often used alongside either a GoTo or PushTo computerised mount therefore, they also tend to cost significantly more than their reflector or refractor counterparts but, considering they also will solve the major problems the other 2 variations have, I guess you could say you’re paying more as a result of the extra quality provided and not because it uses more parts to function.

Hopefully this article has helped you understand the pros and cons of both of the major cassegrain telescopes along with when and where each system should ideally be used.

I’d say that both designs are great but, whether you prefer versatility or the ability to view planets in more detail will likely be the main factor to consider when pulling the trigger on either one of these cassegrain optics.

3 thoughts on “Schmidt-Cassegrain vs Maksutov-Cassegrain (The Differences!)”