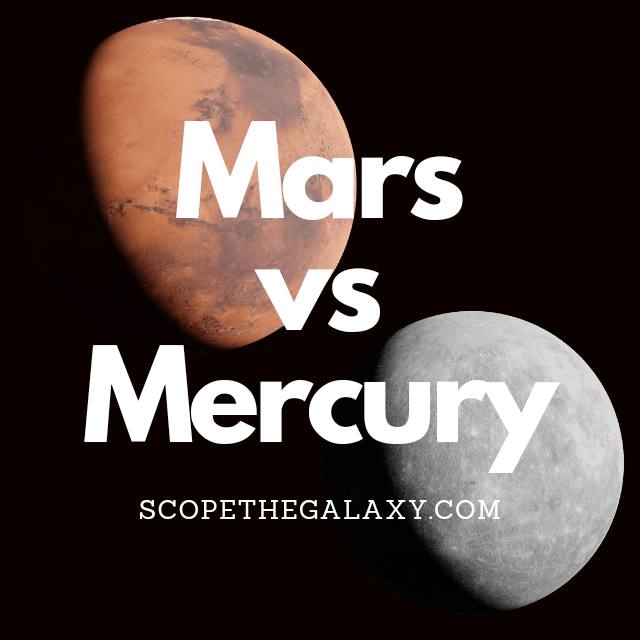 The main differences between Mars and Mercury is that Mars is the 4th farthest planet from the Sun, Mars is around 1.5 times the size of Mercury, it has 2 moons whilst Mercury has zero, Mercury has a thinner atmosphere and in turn is hotter than Mars with a surface temperature averaging 167°C as opposed to Mars that -67°C.

There are numerous differences between Mars and Mercury so continue reading if you want a more thorough look at both planets, some of their similarities and a more detailed breakdown of their differences.

This means that one year on Mars will take roughly 687 Earth days and a day on Mars is roughly the same as Earth at 24 hours and 37 minutes. It’s axial tilt is als very similar to that of Earth where it is positioned around 25 degrees to the right

It may not be the largest terrestrial world in our solar system as its diameter is only 6,779km but, it does have the most moons amongst the normals terrestrial planets here where two, namely Deimos and Phobos are currently orbiting the red planet.

How Are Mars And Mercury Similar?

Mars and Mercury do have their similarities, which in this case would include the following:

Differences Between Mars And Mercury

In regards to the differences, these would include the below:

Mars and Mercury do have their fair share similarities from their general composition of a rocky surface and atmosphere, relatively small size, gravitational strength that is almost equal and the fact they both orbit the Sun in a similar manner.

However, they differ in more ways than they are similar from their mass, temperature, size, the length of their days and beyond. Therefore, despite how similar they are in comparison to the rest of our solar system, they’re still completely distinct from one another.