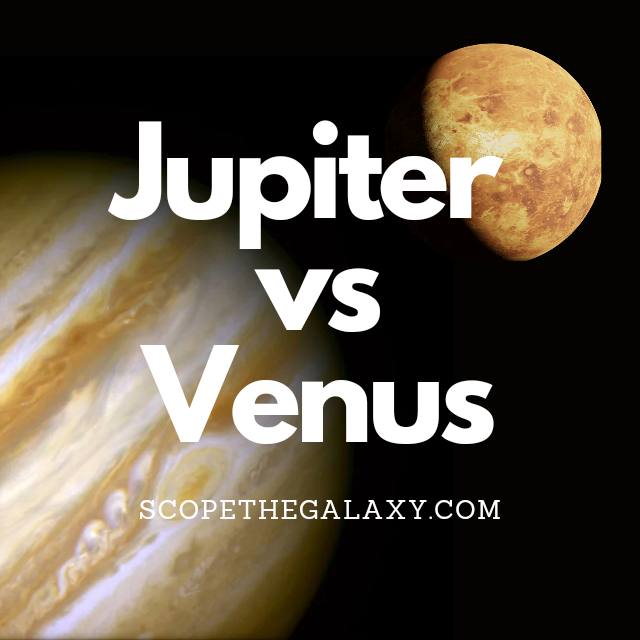 The main differences between Jupiter and Venus is that Jupiter is the 5th farthest planet from the Sun, the largest planet in our solar system, has the strongest magnetic field in the solar system and has 79 moons whilst Venus has 0 moons, is the 2nd closest planet to the Sun, is both the hottest and brightest planet and has a day that takes 243 which is even longer than its 225 day orbital cycle unlike Jupiter’s 10 hours.

There are numerous other differences and even the odd few similarities between the two so, continue reading if want a more thorough outline of the variety of other features that differentiates Jupiter and Venus from each other.

Unlike all the planets further outside the Sun’s orbit, Venus and even Mercury have no moons orbiting it. The most probable reason for this is due to its closer proximity to it, which means that smaller objects orbit the Sun as opposed to Venus.

Similarities Between Jupiter And Venus

Although Jupiter and Venus don’t share too much in common, there are still a few things these they do share. They would include the below:

Differences Between Jupiter And Venus

Jupiter and Venus are both planets that rank first in a number of areas within our solar system. Venus is the hottest, brightest and even has the longest days whilst Jupiter is the biggest and has a magnetic field even stronger than our Sun.

They vary quite significantly from one another as a result of these differences, so just because they are part of the same solar system doe not mean they have too many commonalities, which of course has been broken down in more detail in the sections above.