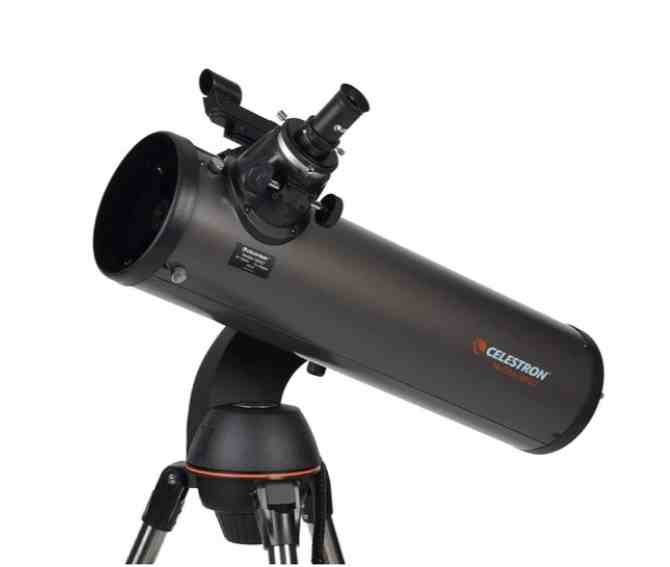 How Do The Celestron Nexstar 130SLT’s Optics Work?

The Celestron Nexstar 130SLT is the top end entry level computerised telescope within the nexstar line, with the mid-range and high end Nexstar scopes being the orange tubed SE lineup and the rechargeable evolution line.

Unlike those 2 which use the hybrid compound optics, namely maksutov-cassegrain or schmidt-cassegrain optics, the 130SLT uses the very typical and widely used Newtonian reflector design.

There’s also a third variant of optics telescope have known as refractors. The reason why compound systems are know as hybrids are because they essentially use a combination of mirrors and lenses. (if you want a better understanding of all 3 optical variants, I’d suggest clicking here for a post we’ve written on it)

Each variant has their pros and cons which is what I’ll basically covering now.

The pros of the reflector optics found within the Nexstar 130SLT include.

The maintenance and particularly the collimation side of things, when it comes to Newtonian reflector based systems like the Nexstar 130SLT, will only really be a problem in the beginning or for younger kids when initially starting out but, overtime it will get easier. This is made a little easier due to Celestron’s skyalign software but it most certainly will be an annoyance.

Check out the video for instructions on how to align/collimate the mirrors on your Nexstar 130SLT if you’re curious about the process.

What Do The Celestron Nexstar 130SLT’s Specifications Mean?

The Nexstar 130SLT has upper beginner range specs with an aperture of 130mm, a focal length of 650mm resulting in a fairly wide focal ratio of f/5.

What this means is that theoretically the 130SLT will be able to achieve a max magnification of 260x although the actual useful amount is unlikely to reach that number exactly . Of course it will also suffer from a little bit of comatic aberration which can be fixed if you decide to install a coma corrector later down the line.

Provided you can get the maximum power out of the 130SLT, you’ll be able to view quite a lot of objects and planets in space, some of which include :

The Nexstar 130SLT’s dimensions and weight aren’t too bad either as the tube itself is only 53.3 cm whilst the weight of the system is roughly 8-9kg, maybe even a little heavier when fully assembled.

It’s definitely not going to be the easiest of devices to move for smaller children but for pretty much everyone else, 130SLT is more than portable enough to move around your house with relative ease whilst also being a pretty easy device to store due to its moderate size.

The accessories that come in the box include two 1.25″ plossl eyepieces at 25mm and 9mm, 2″ wide field focuser, a starpointer, a tripod, a computerised mount with 4k+ database of objects to choose from, it’s own controller and a bunch of other miscellaneous documents.

The accessories included are pretty good for the most part and will be good enough to get started with. Of course later down the line eyepieces designed for higher magnification will be worth looking into as well as higher quality eyepieces as a whole that eclipse the good beginner level quality eyepieces provided by the plossl pairing.

The mount as you should know is computerised, motorised and essentially a GoTo mount like the ones created for the SE and evolution line.

This in turn means it can in theory automatically lock onto anyone of the objects within it’s database however, there is one major flaw with it that will affect your experience with the 130SLT, especially when the telescope is used at higher magnification levels.

The problem here is that the optical tube that is the nexstar 130SLT is too big for the mount so, this will ultimately result in a shaky viewing experience. The shakiness not only affects the viewing experience but can also be problematic for the GoTo side of the mount too.

The mount is also quite an old design too being nearly 20 years old at this point so a lot of the design choices from the small finicky buttons of the controller to the fact you either need to power it with batteries or purchase a portable DC power supply if you plan to use it outside are of course, quite a pain in this day and age.

The battery life isn’t all that great either with the 8 AA batteries needed in order to power it yet they don’t last much longer than an hour or two according to users.

The final negative about the mount is that because it is so light, often times if you bump it a bit too hard it may turn off. The reason why this is a problem is because you’ll actually need to put the time and date in every time the mount turns off!

This is arguably the most annoying thing about the mount and it’s mostly due to this major design flaw that I wouldn’t actively recommend you purchase the 130SLT.

As for the positives, the mounts light weight nature means separating the tube from the mount (which should be easy enough due to the 130SLT’s vixen dovetail design) will allow for a much easier experience when it comes to moving the system around.

The disproportionate weight between the tube and mount also means certain accessories like a 2″ eyepieces or a camera for astrophotography may not work well with the 130SLT out of the box experience either.

The skyalign feature provided allows user to easily collimate and align the device, the tripod it uses is made of steel meaning it should be quite durable and the accessory tray adds convenience to the experience too. The mount itself isn’t bad considering the 130SLT is only around $350 – $400 but it is definitely worth knowing its fault before committing to purchasing it.

What Are Users Of The Celestron Nexstar 130SLT Saying

From what I could find most users had a very pleasant experience (opticsplanet users that is) with the Nexstar 130SLT provided they read the instructions in beginning to ease their way into using it. 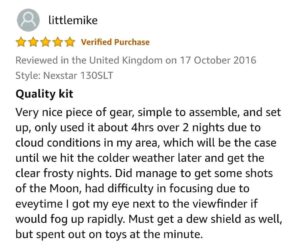 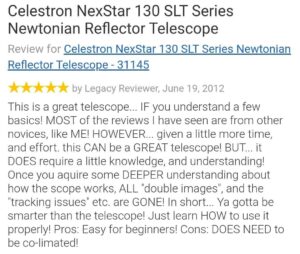 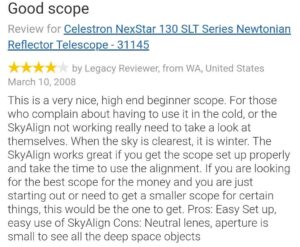 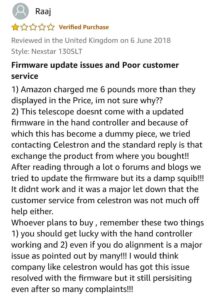 Nevertheless, as a whole most users of the Nexstar 130SLT had a pleasant experience with it so, hopefully this has given you bit of insight on whether the telescope is for you or not.

The 130SLT is a good telescope and a fairly affordable computerised telescope too however, it’s far from the greatest system as it does have a fair few issues from the mount not being sturdy enough for the optical tube to individuals receiving the occasional faulty product and so on.

It’s also not the most portable of devices. The 130SLT is simply a good a product so, if you’re looking for alternatives and are willing to invest a bit more money, this best of list we created on the best computerised telescopes is worth looking into.

On the other hand if you’re willing to sacrifice the GoTo mount in exchange for power, the SkyQuest XT6 or XT8 are worth looking into too.

All in all the Celestron Nexstar 130SLT is a fairly solid reflector based computerised telescope which will work well enough for beginner to casual astronomers who just want to easily locate objects, provided they’re willing to read and follow the instructions in the beginning.

However, if you intend to bring out more of the device’s power, due to the light weight of the mount in comparison to the optical tube, the images will mostly be quite unstable and unpleasant without implementing other measures to reduce the shaking.

If these are problems you’re willing to accept then the 130SLT, due to its general value for money is a solid pick. If not, then I’d probably recommend giving it a miss.