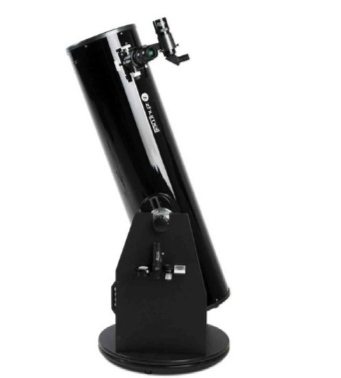 Welcome to my Zhumell Z10 review!

In this review I’ll be going over the pros, cons and features of the Zhumell Z10 so that you can make an informed decision on whether this heavily praised 10 inch telescope is worth your money or whether it’s something you should down right avoid. 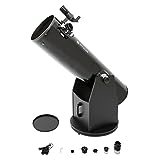 There are also 2 other core optics you can find within telescopes, namely refractor and compound optics but I won’t be covering them in detail here (if you want a more detailed look though, click here to read an article we’ve written on the subject) but, I will compare the pros and cons of a reflector to them.

The pros of the optics found within the Zhumell Z10 :

As a whole the optics found within the Zhumell Z10 are very solid with its cons only really being minor annoyances which you definitely will look past (to some degree) the further along you get using telescopes and learning the tricks of the trade.

The Zhumell Z10’s specifications include a 254mm aperture, a focal length of 1250mm resulting in a fairly wide focal ratio of f/5. This wider focal ratio does mean coma will be a lot more visible on the device but, this shouldn’t detract all that much from your experience all that much.

As for how the specs translate in real world usage, the Zhumell will be able to achieve a quite staggering theoretical magnification of 500x meaning you’ll be able to locate anything within out solar system with great detail especially at the top end of the systems power and of course other deep space objects should look great through the lens too.

If I were to list a few of things the Z10 would comfortably be able to view, they’d include :

The other major thing to consider is the Zhumell Z10’s dimension and weight. This telescope is obviously far from being portable. It is quite big with it being well over 5ft tall when fully assembled and weighing in at around 27kg (60lbs).

This makes the Z10 far from a beginner friendly device. Instead it’s obviously geared towards more intermediate to veteran level amateur astronomers who also have a for bit of space to store it.

In the box the Z10 comes with 2 eyepieces, one 2″ fully coated 30mm eyepiece and another 1.25″ 9mm eyepiece, a dual Crayford focuser, a 8×50 Finderscope, a Laser Collimator, a 1.25″ moon filter along with a few other books and miscellaneous documentation.

The accessories that come with the Z10 along with the optical performance itself really makes this device one of the best value for money systems on the market and one that really doesn’t cut any corners.

Yeah later down the line the equipment will likely need to be upgraded especially the 9mm eyepiece which is quite a narrow eyepiece but in general, what you get with the Z10 is very similar to the great Z8 so I’d say this is definitely one of the better features of the Z10, along with its price of course.

The mount is pretty solid too being a dobsonian design.

What Are Users Of The Zhumell Z10 Saying 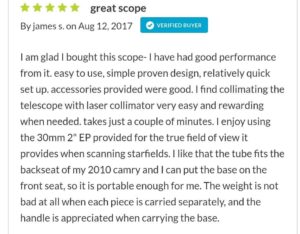 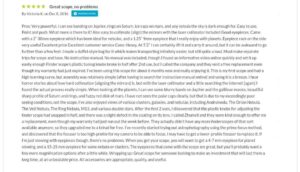 The only real nitpick about the device is it’s weight and size, which at over 5ft is far from an easy thing to move around even if its isn’t super heavy.

Besides the size of the device the Zhumell Z10 seems to tick more or less any box a good telescope should tick.

As the device is very large, unless you have a lot of space to store it, it may become a bit of a pain in the butt to deal with which is why, if you’re interested in a more portable offering in exchange for the overall power of your telescope, this list on the best compact telescopes might be worth looking into.

On the other hand if you’re interested in a system made more so for astrophotography, it might worth clicking here to check out some of our favourite astrophotography systems.

All in all the Zhumell Z10 is a great 10 inch device that really doesn’t fall short in anything at all considering it’s roughly $700. The value for money is obviously there, it’s easy to set up, the views will look great through the lens and of course the accessories provided are really great too!

The only real complaint anyone had with the device was its size and heft, which honestly is understandable as Zhumell had to cut costs somewhere right. Nevertheless, if you can look past the systems size and heft, the Zhumell Z10 is a very very good 10 inch device and one I won’t hesitate in recommending.

==>Click Here To Check The Zhumell Z10’s Pricing On Amazon!