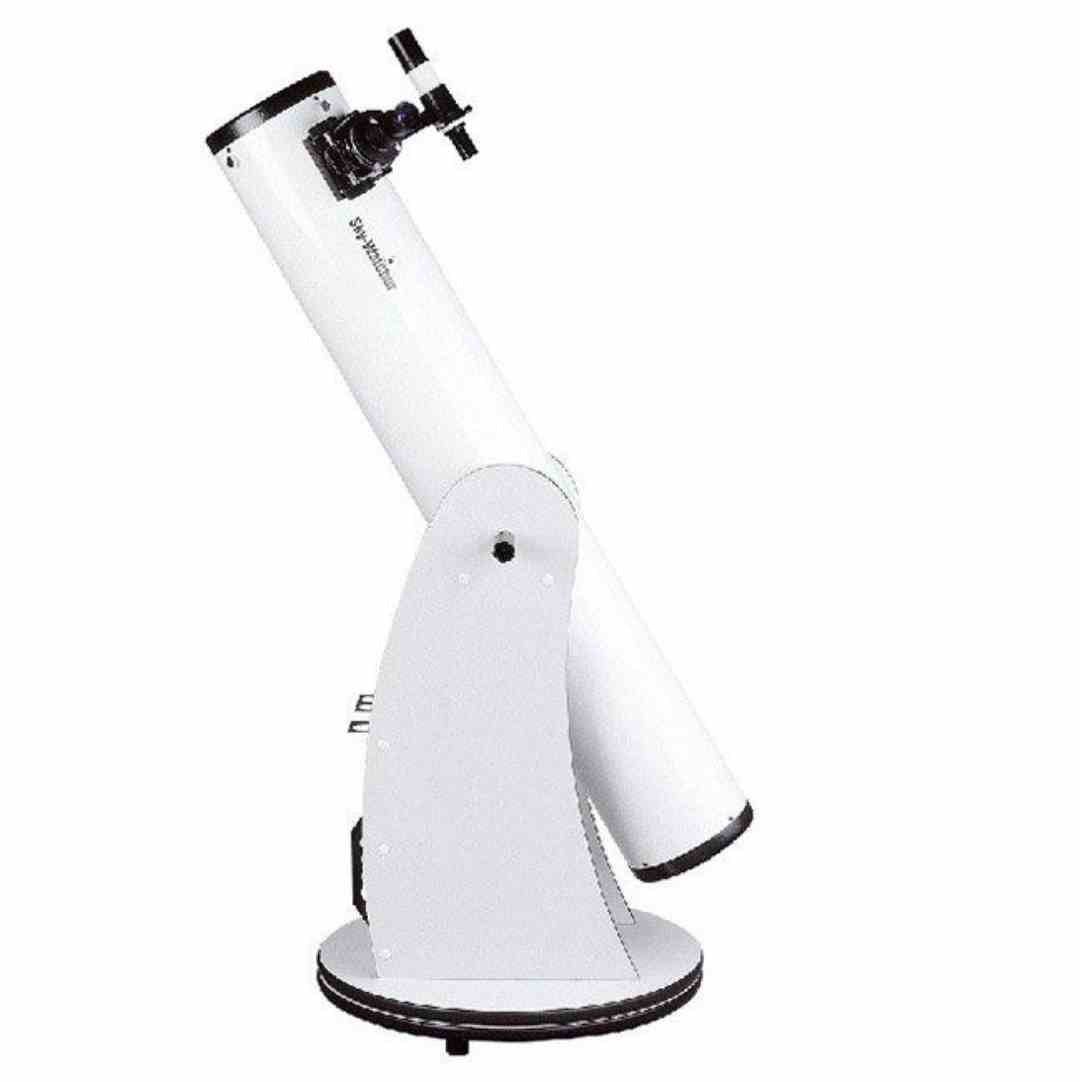 Welcome to my SkyWatcher Dobsonian 6-inch (also know as the Skyliner 150P) review!

In this SkyWatcher 6 review we’ll go over the pros, cons and other important features that the system has so that you can make an informed decision on whether this beginner level telescope is for you or one that you should skip out on. 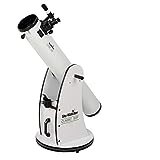 How Do The The Skywatcher Dobsonian 6-inch’s Optics Work?

The optics used within the Skywatcher 6 is a Newtonian reflector design meaning the mirrors within tube are of a parabolic variant and in turn will not suffer from the spherical aberration the cheaper spehreical mirrors tend to provide. There are also other sub variations of the reflector design but of course there’s no point in discussing them here.

Also, if you don’t know already, there are 2 other optical telescope types too, which include the refractor and compound optical types. The reason I mention them here is to compare and contrast the newtonian reflector optics to them so you understand the pros and cons of the optics found within the SkyWatcher 6.

The pros the optics within the SkyWatcher provide include the following :

The cons of the reflector optics include the following :

If we’re talking about the best overall optical design, from the versatility to the amount of detail a telescope can provide within the lower price range side of things (we’re talking $500 or under), compound telescopes will generally be better although they are a lot more expensive however, the reflector optics and refractor telescopes are more so a toss up depending on how you’ll use your device.

I can’t say that either one of these optics are better than the other however, I can say that the SkyWatcher 6 definitely is not lacking in the optics department, particularly when you take into account that’s it’s generally less that $300 to buy.

What Do The The Skywatcher Dobsonian 6-inch’s Specifications Mean?

The SkyWatcher 6 has some solid specs considering it’s price, with an aperture of 153mm, a focal length of 1200mm resulting in a fairly narrow focal ratio of f/7.8.

This means the device will be able to achieve a maximum theoretical magnification of around 300x whilst the larger focal ratio means coma won’t be as prevalent within the device.

Of course in real world use the theoretical magnification will fall short to some degree due to how shaky the image will be at the top end of the SkyWatcher 6’s power however, I have to say that this SkyWatcher does have the most balanced specs I’ve seen at the $300  price and will work well when it comes to viewing objects in space.

Some of the celestial it’ll be able to view include the following :

The SkyWatcher is far from the most portable of 6 inch devices we’ve come across, then again this makes sense as the manufacturers do have to cut costs somewhere right?

As for the telescope’s dimensions and weight, they come in at 124cm x 69cm x 36cm by 24.3kg respectively so, I don’t doubt that it might be a bit of a pain to move it around or even store.

This is pretty much the only trade off though when it comes to the specs of SkyWatcher 6 and you have to admit, it’s not the worst thing the manufacturers could have decided to fall short on.

==>Click Here To Check The The Skywatcher Dobsonian 6-inch’s Pricing On Amazon!

The accessories that come in the box includes a single-speed 2” rack-and-pinion focuser made mostly of metal, two 1.25” Super eyepieces that are very similar to Plossls which includes a 25mm (48x) and 10mm (120x) eyepieces, a basic 6×30 finderscope and a bunch of miscellaneous documents.

The focuser is well built and will get the job done however the adapter used for either a 1.25″ or 2″ eyepiece is a little confusing to use, the 2 included eyepieces are also really good for the price but, later down the line you’d definitely want to upgrade them to maximise the SkyWatcher 6’s power.

The included finderscope is probably the most disappointing accessory in the box. In general use it is alright but, the images you’ll see through it will be quite dim and the way it’s designed doesn’t make the finderscope the most comfortable of experiences either.

You’d definitely want to upgrade this to a 9×50 or even a slightly smaller 8×40 finderscope for a better overall experience.

The SkyWatcher 6 uses a dobsonian mount which means the altitude motion is provided by two round plastic bearings riding on Teflon cylinders attached to the interior of the mount. The tensioning is then provided with a spring-loaded knob on one side whilst the other side doesn’t really do anything.

The manner in which the mount functions is pretty solid whilst the assembly process is simple too, I guess the only negative is that the mount is made of particle board, which when exposed can rot but, this is a simple fix and really won’t cause too much of an issue, in beginning at least.

What Are Users Of The Skywatcher Dobsonian 6-inch Saying

The device itself is very nicely received by the majority of its users and the only real complaint about the SkyWatcher is its size. So yeah, if you’re really on a budget the Skywatcher 6 is probably should be at the top of your list. 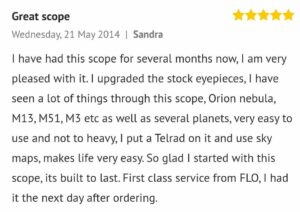 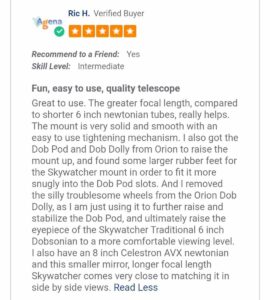 In terms of value for money and overall optical performance there really aren’t any telescopes better than the SkyWatcher 6 in $300 price range meaning there really isn’t a single device that I’d recommend over SkyWatcher if that’s your budget.

Nevertheless, if you want a small and compact device, it probably won’t be for you so we’ve created a list on some great portable alternatives to look into instead, which you can access by clicking here.

Overall the SkyWatcher 6″ traditional dobsonian is arguably the best 6 inch device in it’s price bracket and one of if not the best device within the $300 price range.

Yeah it has a few shortcomings but, for the price I’m sure the majority of beginner level telescope users can look past it.

Ultimately, if you wish to buy SkyWatcher 6, I really don’t think you can go wrong with it.

==>Click Here To Check The The Skywatcher Dobsonian 6-inch’s Pricing On Amazon!