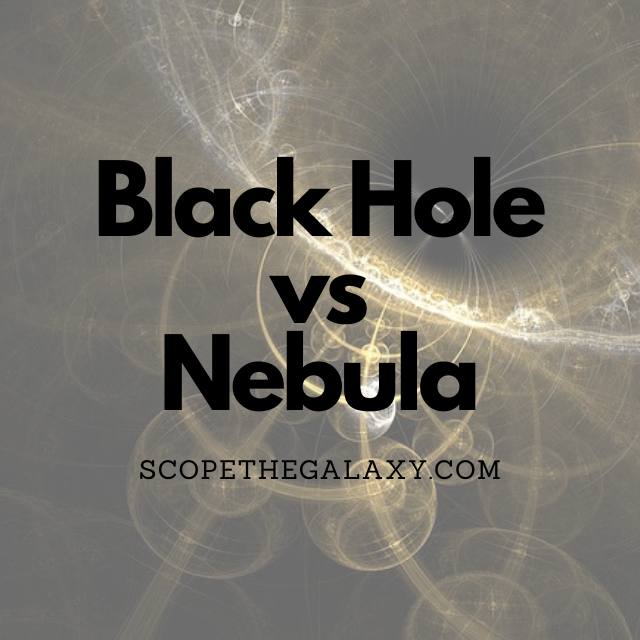 The main difference between a black hole and nebula is that black holes form after a massive star goes supernova and the remnants from that supernova collapses into itself creating a dark energy disc whereas nebulae are simply the cloud a dust remnants that remain after the explosion and tend to stick around for 20 million years on the upper end.

With that being said both entities do showcase many more differences than what had been mentioned above so continue reading to get a more thorough breakdown of any other differences.

Just like the components of their dead star counterparts these dust clouds will be made out of the elements hydrogen, helium and a number of other ionised elements spread across their local region of space.

Can A Black Hole Swallow A Nebula?

Black holes have amongst the strongest gravitational pulls in the known universe therefore, in theory it makes sense that black holes could swallow uo entire nebulae.

With that being said, the size of the black hole and the distance that separates the two will also determine how easily they’ll capture the clumps of dust into their domain.

The same principle applies for stars and other interstellar objects that fall within a black hole’s spaghettifying range.

Similarities Between Black Holes And Nebulae

One of the main similarities between the two is that both form when stars die.

Other than this, the two are genuinely very different from each other, whether it be their composition, mass, so on and so forth. Of course that’ll be broken down in more detail below.

Differences Between Black Holes And Nebulae

As for the differences between a black hole and nebula, they include the following:

Black holes are celestial objects that will likely remain in space until the known universe dies or certainly long enough for a quadrillion+ black holes to form whereas a nebula will even eclipse that in terms of the amount that will be produced.

All in all nebulae are completely different from black holes, whether it be their composition, their size and most certainly their lifespan so, even if they form in much the same way, they function distinctly from one another.