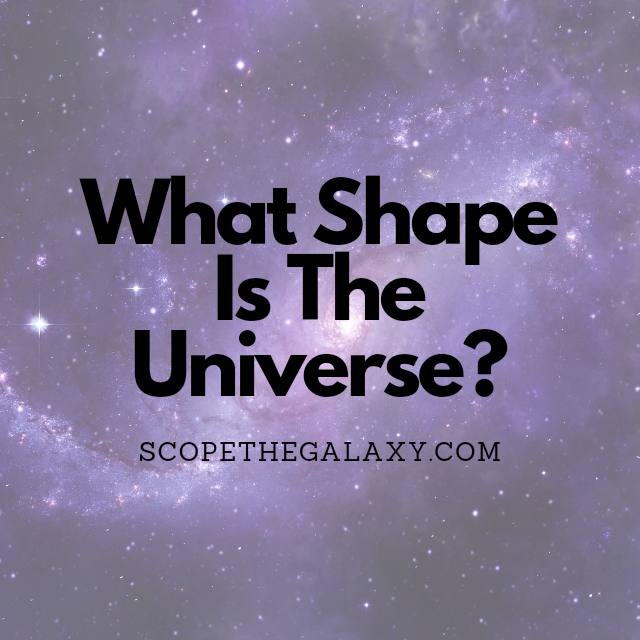 There is no conclusive way for scientists to determine the shape of our universe. Still, most current research suggests that we live in a flat universe, which can expand in every direction without experiencing a positive or negative curvature.

Continue reading to discover why recent data suggests our universe could be curved and the impact this would have on our current understanding of science.

Is The Universe Flat Or Curved?

The majority of cosmological evidence suggests that the density of our universe is just right for expanding outward in every direction without experiencing a positive or negative curvature, making it flat.

In this type of universe, we can apply Euclidean geometry on an epic scale: two parallel lines will never meet, and the internal angles of a triangle through the universe will always add up to 180 degrees.

It’s the type of universe that makes sense to us and adheres to physical and mathematical principles as we understand them. By contrast, the principles of a curved universe get weird. Here, you would experience bulges in space and inflating angles exceeding the standard 180 degrees of a regular triangle.

The discovery of a curved universe would require a significant revision in the fundamental cornerstones of cosmology as we know them. If the universe is curved, it goes against every other dataset we have.

Why Is The Universe Flat?

The structure of a galaxy is a complex issue that poses several questions. Still, the reasons for its shape are relatively simple; it all comes down to two factors. First is the galaxy’s density, and secondly, the rate at which it expands.

Around 68% of the universe consists of dark energy; another 27% is dark matter. This leaves just 5% of “normal” matter, including stars, planets, and other bodies. We calculate the density of a universe by observing the amount of ordinary matter that exists in a given amount of space.

When the universe possesses enough density to prevent further expansion, it will take the form of a ball or sphere. We call this the closed model, though it does possess a paradoxical quality: a closed universe is finite, but it doesn’t have any limits.

Suppose it was possible to circumnavigate this spherical universe; you could travel around infinitely without hitting a dead end or toppling over an edge. However, if the universe does not possess sufficient density to overcome the force of expansion, it will open up and curve into a shape resembling a saddle.

Our galaxy is different. It sits in what scientists term “The Goldilocks Zone,” where the density is just right to maintain a flat structure. Possessing an equivalent density of six protons for every 1.3 cubic yards, the universe can expand in every direction without experiencing a positive or negative curve.

The universe possesses a shape. Still, scientists are not sure what that shape is. The best clue we have to the form of our universe is the CMB or cosmic microwave background. This is the Big Bang’s afterglow which radiates all around us.

Is The Universe Open Or Closed?

Scientists measuring temperature fluctuations in the cosmic microwave background have found almost no curvature in our universe at all.

Still, a paper published by Alessandro Melchiorri and his colleagues in 2019 suggests that the standard cosmological model could be wrong. Their report, published in Nature Astronomy, suggests that our universe could possess a spherical body.

Their conclusion favors – with 99% certainty – that our universe is a closed one. Melchiorri and his colleagues believe that the discordance within the CMB data confirms that the universe is closed.

To calculate the density of our universe, the Planck telescope measures the amount of gravitational lensing (or deflection) that the cosmic microwave background light has experienced during the last 13.8 billion years.

If these photons encounter significant amounts of matter, they will experience more lensing. The more matter, the more lensing, and the more substantial divergence from their starting point in the universe.

What Are The Possible Shapes Of The Universe?

According to the Theory of General Relativity, there are three possible forms that the universe can take: flat, open, or closed. Certain images help us form a clear idea of what these galaxies might look like in our minds.

The shape of a universe can provide us with information about its past and its future. For example, we can learn whether the universe is finite or infinite and if it will continue to expand forever.

Does The Universe Have a Definite Shape?

According to Melchiorri’s analysis, this data suggests that the universe could be 5% denser than scientists previously believed.

This discrepancy could be significant in altering the form of our universe; removing its density from the goldilocks zone means that the force of expansion would affect the curvature.

In contrast, other scientists viewing these ancient light observations from the Planck space telescope have a different view. In 2018, cosmologist Antony Lewis interpreted this data and reached an alternative conclusion. His team described the unique data feature as a “statistical fluke.”

Both teams conclude that the data deviates by 3.4 standard deviations; if the universe is flat, this is a massive fluke. It equates to tossing a coin and flipping heads 11 times in a row (a roughly 1% probability).

Still, Lewis and his team believe this is precisely what has happened or that some unaccounted factor could have blurred the light and thus, mimicked the effect of more matter.

The data is there for scientists to observe, but the way that different researchers interpret these results leads to different conclusions. Within the scientific community, a flat universe is still the preferred theory, but that’s not to say that new data won’t change our understanding of the universe’s structure.

What shape Is the Universe? A New Study Suggests We’ve Got It All Wrong | Quanta Magazine

What shape is the universe? | Astronomy.com