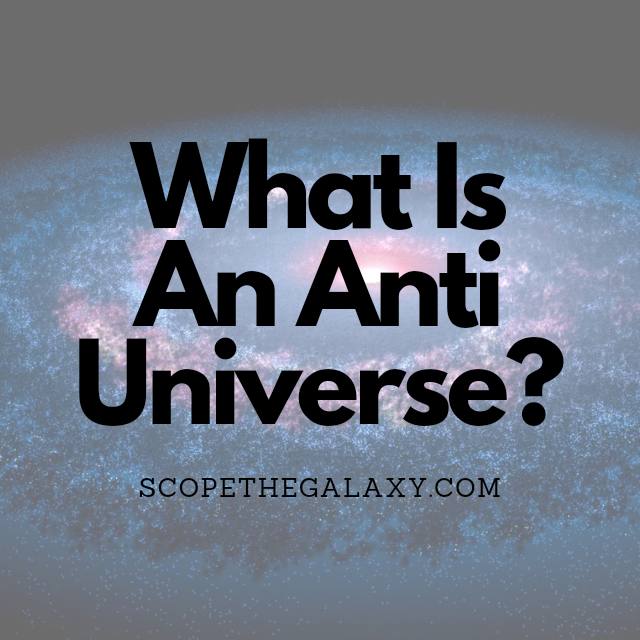 In an intriguing new theory, scientists suggest that an “anti-universe” could be running backward in time from the point of the big bang. Applying the existence of fundamental symmetry to the universe as a whole, a mirror image of our universe could help us to understand the nature of dark matter better.

Continue reading to discover why scientists think the antiverse exists and what would happen if you could travel to this mirrored version of our universe.

What Is The Anti-Universe Theory?

The idea behind the anti-universe theory is that our early universe was hot, dense, small, and so uniformed that it would look the same going backward as it does forwards.

The anti-universe theory is based on the fundamentals of symmetry. The CPT theorem states that charge, parity, and time are all symmetrical, and no matter what direction you flip them in, they will behave the same.

If you flip the charge of a particle, you’ll experience the same reaction; if you observe the mirror image, you get the same result, and if an interaction runs backward, it still looks the same.

Most physical interactions obey these standards, and scientists have not yet observed an exchange that violates all three fundamentals of symmetry.

Theoretical physicist Latham Boyle and his colleagues published a 2018 paper in Annals of Physics, which extends the application of symmetry in physical interactions out to the entirety of the universe.

The theory that all physical interactions preserve a fundamental symmetry suggests that the universe too should have a mirror universe that flips everything around and runs time backward; this would give balance to our universe.

If this “antiverse” did exist, it could help explain the essence of dark matter. We are aware of three neutrinos varieties (electron-neutrinos, muon-neutrinos, and tau-neutrinos), which all spin to the left.

What interests scientists is that all other particles possess variations that spin to the left and right. For this reason, scientists have long debated the existence of a right-spinning neutrino, and a mirror Universe could be the key to unlocking the answer.

If these particles existed, we would have no way to detect them. Still, gravity means they would interact with the rest of the cosmos in a behavior similar to dark matter. And this hypothetical scenario could pose an explanation for the existence of dark matter.

There’s no way for us to say whether or not an antiverse exists definitively. If it does, it exists before the big bang theory, which, needless to say, is off-limits to today’s scientists. Still, they can test this hypothesis via Majorana particles.

Majorana particles are the hypothetical antiparticle of the neutrino. While we cannot yet establish whether or not neutrinos have an antiparticle, it is one possible way for scientists to scan for an antiverse.

In theory, one of the neutrinos would not possess any mass. If scientists can find a way to measure the mass of said particles accurately and find one to be massless, it would provide evidence to support the theory.

In addition, the universe’s expansion could hold the secrets of its formation. Cosmic inflation is a theory that explains how the universe expanded exponentially at the speed of light.

Many physicists believe this explains several flaws of the big bang theory. Numerous experiments are underway to prove the existence of gravitational waves that the universe would have produced during this inflation.

If science fails to prove the existence of these waves, then we’ll have to look for an alternative explanation, and a mirror Universe could gain a solid theoretical foundation.

Scientists have some understanding of the fundamentals of antimatter thanks to their research at the large hadron collider.

A Universe based on antimatter would never form galaxies or stars; instead, it would possess many antihydrogen and helium charges.

Traveling to the antiverse is impossible and would be a death sentence for anyone who tried. Suppose you made it to the antiverse, the particles in your body would react with the abundance of antiparticles in this mirror Universe, and you would explode spectacularly before completely disappearing.

In this scenario, you would also risk destroying the life on the mirrored version of Earth. Just one gram of antimatter reacting with one gram of matter can cause a reaction equivalent to 21.5 kilo tonnes, a little bit more than the power of the “fat man” bomb, which was once dropped on Nagasaki.

Considering that the average person weighs 75kg, this would lead to a disastrous consequence. Even if we could find a way to resist an antimatter reaction, we would need to travel back 13.8 billion years to an alternate Universe.

Would An Anti-Universe Run Backwards In Time?

Popular big bang theories assume that the universe began with an imbalance of particles and antiparticles. When the two opposing forces meet, they assimilate and cease to exist in an explosive reaction.

If more particles existed to begin with, then the ones left over after the big bang could have started to form matter, hence the existence of our universe as it is today.

At the time of the big bang, matter and antimatter existed in equal amounts; a short time later, there were one billion and one antimatter particles for every one billion particles. Now, scientists cannot detect any significant concentration of these “antiparticles,” so the question is, where did they go?

A theory proposed by theoretical physicist Dr. Neil Turok suggests that immediately after the big bang occurred, two Universes simultaneously sprang into existence. One of these is the universe we live in; here, time moves forwards, and the universe is composed of matter.

Here, everything runs from the future to the past. If you were there right now, you would be upside down, viewing an upturned screen, knowing the conclusion of this article before you’ve even read the introduction.

Having said that, no matter whether we reside in the universe or the antiverse, we would still perceive matter in the same way, and time would still go forwards for us.

The theory of an anti-universe is an intriguing and exciting one for scientists. However, while proving its existence would be an incredible feat, traveling there (or connecting these two worlds somehow) would have disastrous consequences.

The antiverse is an exact replica of our own universe, only flipped around. In this hypothetical space, everything would be backward, and instead of bright shining stars, we would only see the traces of a hydrogen explosion.

Scientists say there might be an anti-universe running backwards in time from the Big Bang (timesnownews.com)