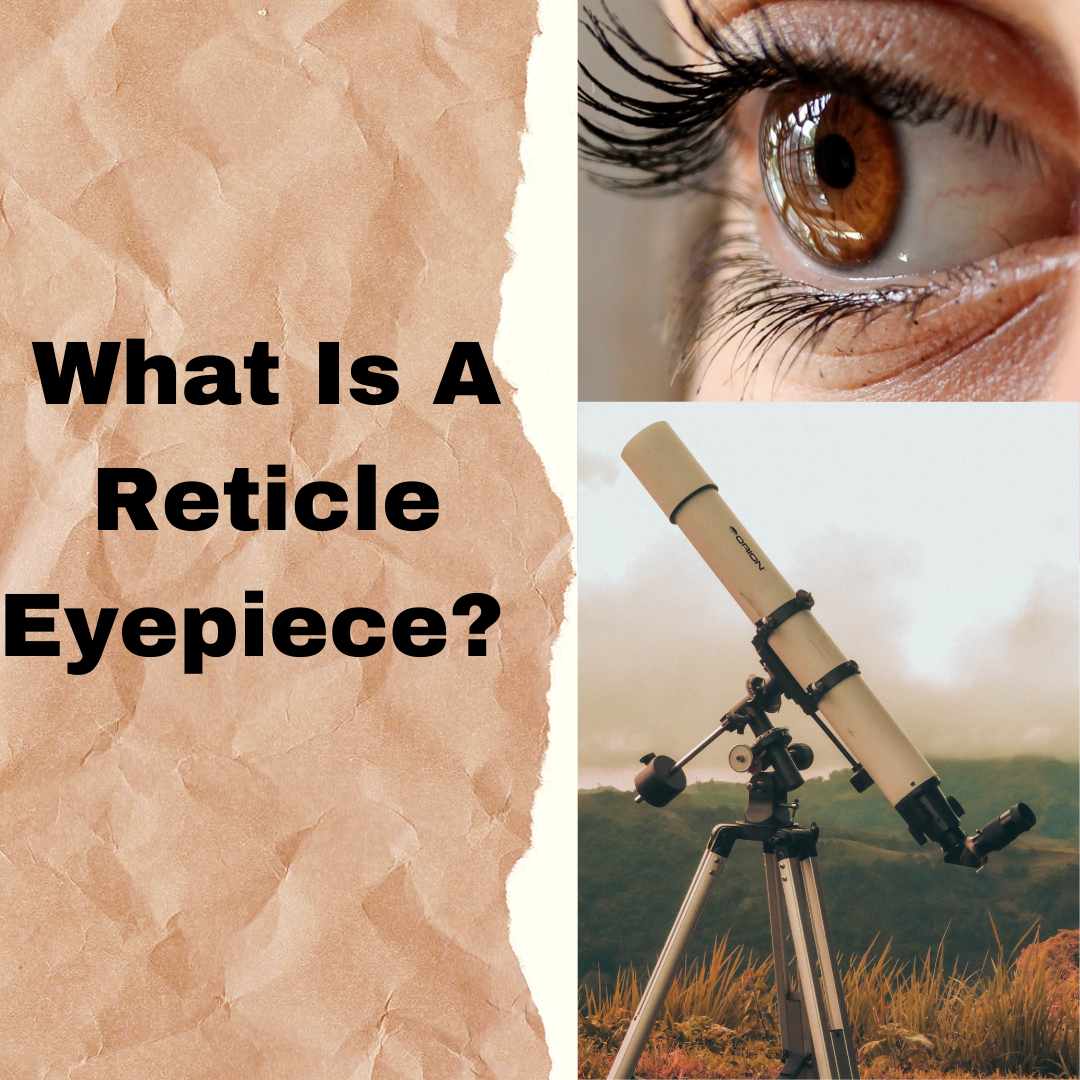 A reticle is a grid or pattern of fine lines built into the focal plane of an eyepiece lens for optical tools and instruments. The reticle eyepiece enables viewers to obtain measurement references or pinpoint objects observed through telescopic sights, optical microscopes, firearm sights etc… In modern devices, a digital image superimposed on a screen or eyepiece may replace a physical lens.

If you want to learn all about the reticle eyepiece, then our article is the right place to start. We explain how a reticle eyepiece works and where it fits on a telescope, as well as touching on the pros and cons of this eyepiece and it’s history.

How Does A Reticle Eyepiece Work?

The reticle, also known as a reticule or graticule, is a type of lens used to make measurements or centre an object in the sights of a visual instrument such as a firearm, microscope or telescope. The name comes from the Latin word ‘reticulum’, meaning ‘net’.

The term ‘reticle’ is commonly used when talking about weapon sights, and ‘graticule’ in the context of scientific instruments. Both have the same fundamental meaning and are used in a similar way.

A reticle eyepiece works by superimposing a scale or pattern onto an image viewed by an observer, enabling them to deduce information about the object’s position, size or movement.

Reticle patterns can vary from simple crosshairs to grids or detailed numerical scales. A reticle eyepiece may sometimes be illuminated for clearer and more precise measurement and targeting.

In modern times, a digital version of the reticle might be used instead of a physical reticle, with the grid or scale being projected onto a screen or eyepiece.

Beyond this broad common picture, use of a reticle eyepiece will work slightly differently in each setting, for example:

Reticle eyepieces are perhaps best known in the general population through the crosshair reticles used in firearm scopes and featured in a thousand films and TV police shows as aids to accurately firing a weapon.

There are actually a number of different gun reticles which marksmen, hunters and soldiers might choose, including multiple cross-hair variations, dots and more sophisticated options.

To aim a gun, the target is lined up with the crosshairs or dot visible through the eyepiece and the bullet is then fired towards it.

Reticle eyepieces for microscopes allow the viewer to accurately measure specimens at very small scales. Stereo or binocular microscopes contain a reticle lens in only one eyepiece, installed in the lower part of the eyepiece. (It does not matter whether it is installed on the left or right.)

Before using a microscope’s reticle eyepiece, it must be calibrated to confirm the exact values represented by the reticle markings. You can calibrate precisely using something called a stage micrometer, a slide marked with a scale of known dimensions.

Recalibration is necessary when moving from one level of magnification to another. While the markings seen through a reticle eyepiece always look the same, the size of the specimen underneath them will appear larger at higher magnifications. With a more powerful objective lens the values represented by reticle markings will change proportionately.

The reticle has played an important role in astronomy for centuries, with the constellation Reticulum even named in recognition of its contribution.

Astronomical reticle lenses come in a range of designs from simple generic crosshairs to highly specific patterns for dedicated purposes (e.g. telescopes used for polar alignment may use a reticle indicating the position of the star Polaris in relation to the north celestial pole).

Larger and more powerful astronomical telescopes may be used together with a smaller auxiliary telescope of lesser power (and larger field of view) containing a crosshair reticle. The smaller scope can more easily find an astronomical object and help the viewer to aim the larger telescope.

While largely now superseded by modern digital alternatives, a special kind of reticle called a filar micrometer was traditionally used in astronomy for making precise measurements, including determining the angular distance between stars. A filar micrometer contains two very fine parallel threads or wires that can be adjusted using a screw mechanism.

Who Created The Reticle Eyepiece?

The reticle is reputed to have been invented by the English scientist, architect and polymath Robert Hooke, who used the device in microscopes and telescopes back in the 17th century. This attribution is not definitive. Amateur astronomer William Gascoigne may also have invented the reticle in advance of Hooke.

Pros A Of Reticle Eyepiece

When using a reticle eyepiece, the viewer can be given an immediate idea of an object’s scale during the viewing process without using any additional measuring tools. With microscopes or telescopes, this then enables them to focus in or zoom out more quickly to find areas of particular interest.

For amateur astronomers, the right reticle eyepiece can drastically speed up the process of scanning the sky and finding particular stars or other celestial objects.  Without a reticle, centering stars could be a challenge.

Reticles can make the measurement of specimens or stars more accurate, especially where a digital reticle image and computer analysis are used.

Cons Of A Reticle Eyepiece

Reticles sit exactly on the focal plane of the lens which means that any dust on the reticle might  be highly visible when looking into the eyepiece, especially if illuminated. This has the potential to distract the viewer or distort the image.

Depending on the instrument and task, reticles may need to be recalibrated multiple times during use.

Digital alternatives may be superior

Digital reticles are taking over from physical in some areas, especially for professional users who the value the precision and ease of analysis given by digital options. In some cases computer-enhanced image analysis methods may do away entirely with the need for reticles.

Where Is A Reticle Placed On A Telescope?

On a telescope, the reticle may be placed at either the front or the rear focal plane of the telescopic sight.

Reticles in the front focal plane reticles can be more durable, but users may prefer for the reticle size to remain constant with changing image size. High end optics companies often allow customers to choose between front or rear mounted reticles.

Reticle eyepieces are useful tools for measuring and aiming a variety of instruments and devices including telescopes, microscopes and firearms.

Reticles have been around since the 17th century and have played a significant role in astronomy and other scientific research. Modern instruments may use digital and/or computer-linked reticles for greater accuracy, ease of use and instant analysis.