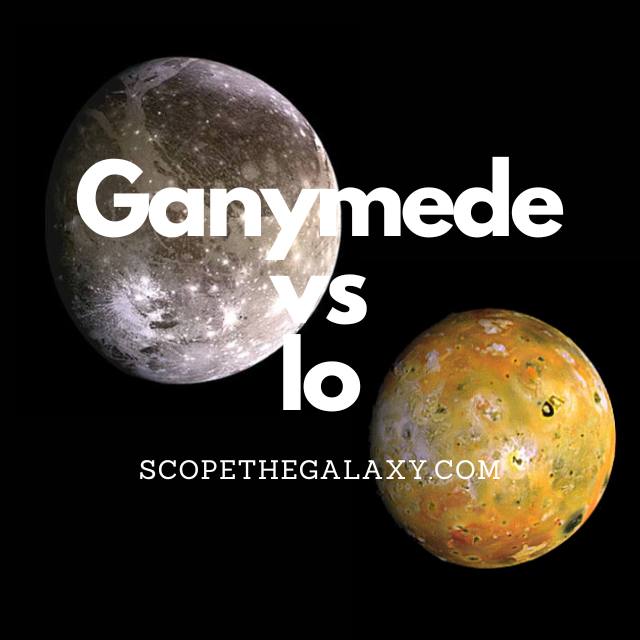 Ganymede and Io are two of Jupiter’s Galilean moons discovered by Italian astronomer Galileo Galilei during the 17th century. These sister moons possess similar qualities, such as their distance from the Sun and their tidal lock to Jupiter. Still, they also have several unique properties that make them fascinating for scientists.

Discover the qualities that differentiate Ganymede and Io, which of them could host extraterrestrial life, and which is the most geologically active body in the solar system. Plus, learn the similarities and differences between these two moons.

Ganymede is the largest moon in our solar system, bigger than Pluto and Mercury. As one of Jupiter’s Galilean moons, first discovered in January 1610, this lunar entity is among the most fascinating objects in the Milky Way.

The surface of Jupiter is half rock and half water ice, and satellite images show a unique terrain. Lengthy grooves make the moon unique, while differing densities of light and dark terrain suggest that the moon passed through many periods of crust formation.

Ganymede orbits Jupiter from a distance of around 1,070,000km, with an orbit that takes seven days to complete. Sitting 778,000,000km from the Sun, the temperatures on this frozen planet vary from -112 to -193 degrees Celsius. The diameter of Ganymede is 5,268km, but with only half the mass of Mercury, it is still classified as a low-density object.

In 2015, NASA’s Hubble Space Telescope made one of its most significant discoveries, providing evidence for a massive subterranean ocean that could contain more water than the total found on Earth’s surface. The discovery of water on a planetary body is significant because it’s the first sign of extraterrestrial life and indicates that a planet is habitable.

The Hubble telescope also showed the presence of ozone on Ganymede, suggesting that the moon could have oxygen in its atmosphere.

Scientists in the 1970s first proposed the idea of an underground ocean. Thanks to recent observations, they now estimate this body of water could be ten times deeper than the ocean’s we find on Earth, stretching almost 100km deep. And it may be bruised under as much as 150km of crust, primarily composed of ice.

Another fascinating feature of Ganymede is that it’s the only moon to possess a magnetic field. This field causes aurorae, ribbons of light composed of electrified gas, that circle the moon’s north and south poles. And because of the moon’s proximity to Jupiter, it is also affected by its planet’s magnetic field, which can change and manipulate the aurorae.

Similarities Between Ganymede And Io.

As both are natural satellites, it only makes sense that Ganymede and Io have their fair share of similarities, which in this case includes the below.

Differences Between Ganymede And Io.

In regards to the differences, they include the below.

Ganymede and Io are two of the largest moons in the Milky Way, which both orbit Jupiter. Thanks to their distance from the Sun, surface temperatures on these moons are frigid; still, the tidal forces on Io mean that the lava flows can reach temperatures of 1,649 degrees Celsius.

And that’s not the only difference. Ganymede fascinates scientists thanks to the likelihood of a subterranean ocean; it is also the largest moon in the Milky Way and possesses its own magnetosphere. In contrast, Io is a volcanic world, where more than 200 of these geological features regularly shoot sulfur flumes hundreds of miles high.

This is our best look yet at Io, the solar system’s most volcanic object (nationalgeographic.com)