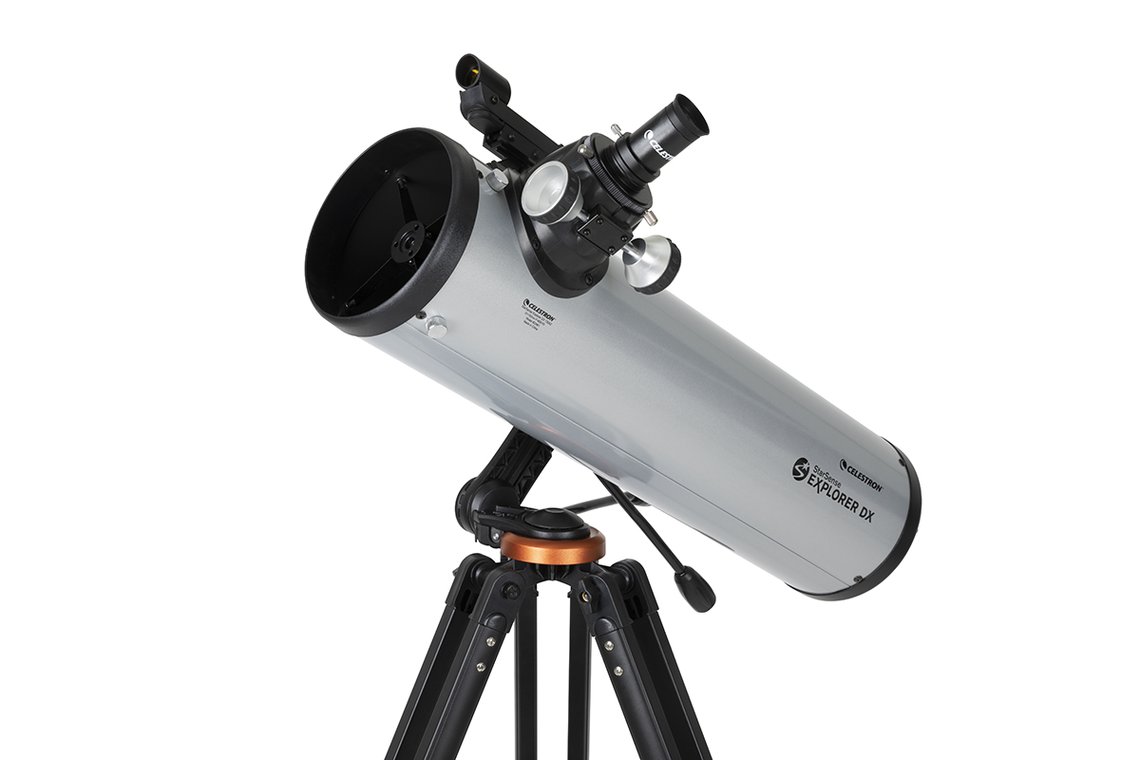 In this review I’ll cover the pros, cons and the Celestron StarSense Explorer DX 130AZ’s features to ultimately help you decide whether it’s a beginner level GoTo telescope worth investing in or one that you should skip. 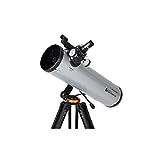 How Do The Celestron StarSense Explorer DX 130AZ’s Optics Work?

If you’re unaware, telescope optics tend to come in one of 3 different variations namely refractor, reflector and compound optics. In the case of the 130AZ it utilises Newtonian reflector optics which can otherwise be referred to it using a parabolic mirror inside the tube.

By using such a mirror the 130AZ does have its advantages as it will allow for images to be focused at a singular point resulting in a far crisper image over the less desirable spherical mirror cheaper reflector devices tend to use (check out this post for a more in depth comparison between the 2 types of mirrors).

With that being said, the mirrors inside the 130AZ does have its pros and cons, which is what I’ll delve into below.

The pros of the optics within the 130AZ include the following :

Nevertheless, as a whole the optics within the 130AZ are very solid and should perform at a very competent level once it’s collimated.

What Do The Celestron StarSense Explorer DX 130AZ’s Specifications Mean?

The 130AZ has an aperture of 130mm, a focal length of 650mm resulting in a focal ratio of f/5. This means theoretically the device should be able to achieve a max magnification of 260x although real world usage would probably result in actual max magnification being a fair bit lower due to the coma views will suffer from.

Nevertheless, if you’re able to get out upto the 200x magnification range out of the 130AZ, you should be able to see the following celestial objects : 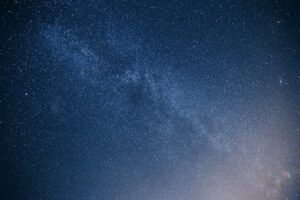 As for its dimensions, the tube comes in at a length of 63.5cm whilst the max height of the device with the included tripod and mount comes in at 1.24m. As for its fully assembled weight the 130AZ is very portable too weighing in at 8.16kg so, it shouldn’t prove to be an issue for many at all when it comes to moving the telescope around.

The device comes with 2 1.25″ kellner eyepieces at 25mm and 10mm, a StarPointe red dot finderscope, a 90 degree erect image starpointer, a Manual Omni Alt-Azimuth mount, a StarSense Explorer phone dock, a tripod, a weird 2.5″ rack and pinion focuser and a bunch of other miscellaneous documents.

The accessories provided are decent with the eyepieces being functional although they’re quite poor quality when compared to the plossl eyepieces that a fair few telescopes in this price range tend to offer.

The red dot finderscope is decent, the 2.5″ focuser isn’t very useable for any eyepieces in the 2″ range due to the mount lightweight nature but, it should be useable with 1.25″ eyepieces. as for the accessories they are all decent enough.

However, the mount does have a couple minor issues.

Firstly it’s height might be a bit of a problem and secondly the adjustment of the mount being quite stiff will make it a bit of pain to smoothly turn the Explorer. The reason why this is a problem is because simply adjusting the axis to allow for a more smooth motion may take anywhere from 30 minutes to an hour to do. 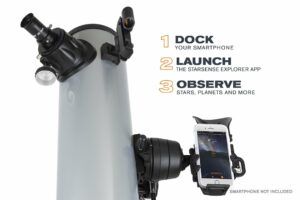 Just like the smaller 102AZ the 130AZ uses the trademark starsense explorer technology, which is a somewhat compromised GoTo mount experience, but without the accuracy of those computerised mounts.

How this StarSense technology works is actually very similar to what can be referred to as plate-solving. What this does is take a snapshot of the sky and from the image taken attempts to locate where you are by comparing the shot to star maps using a specifically set algorithm. This is generally only used to locate a singular celestial object.

So the technology in essence uses your phone to take occasional snapshots of the night sky to locate objects however, as phones can’t really sustain battery for long periods of time whilst taking images, the snapshots aren’t taken all the time. The plate-solving is only done when you first mount your phone or when you move the telescope a significant amount.

Ultimately, due to the somewhat inferior nature of the phones used (at least when compared to a GoTo Computerised Mount) the field of view will only be limited to a max of 0.25 degrees (half the width of the moon) but, due to how simple and easy it is to use as result of the app, it’s not a bad comprise despite being less accurate.

As for what the app provides, they have a database of a few hundred celestial objects so not bad for a beginner getting involved with this hobby.

What Are Users Of The Celestron StarSense Explorer DX 130AZ Saying

For the most part users of this device have found it to be quite solid and more than useable as a beginner getting into this but, one complaint has to do with the inaccuracy of the starsense explorer technology. 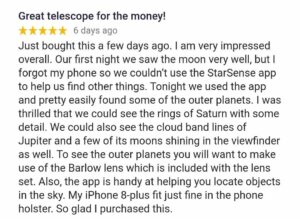 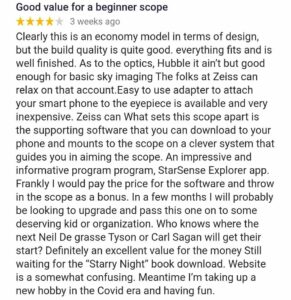 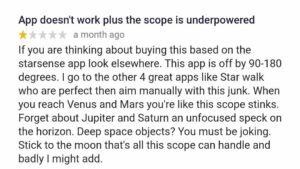 But, when the telescope and the starsense app are aligned well enough, maybe the accuracy won’t be the best but it should still point you fairly close to the celestial object that you would be aiming towards.

If you’re looking into alternatives to the 130AZ that are cheaper, the Zhumell Z130 or the Meade Lightbridge Mini 130 are solid options to look into.

The StarSense Explorer 102AZ refractor variant is a decent option as well as it’ll likely provide a more crisper image despite suffering from a few minor visual discrepancies when compared to the 130AZ.

If you’re in the market for a more powerful telescope however, the Skywatcher Dobsonian 6-inch or the skyquest xt6 are solid scopes to look into too.

Despite a few problems and maybe the slightly more expensive price for the specs, due to the starsense explorer technology the 130AZ is a very solid beginner level telescope that I personally wouldn’t be against recommending so, if you’re on the fence about. It, in my opinion at least it’s worth purchasing.