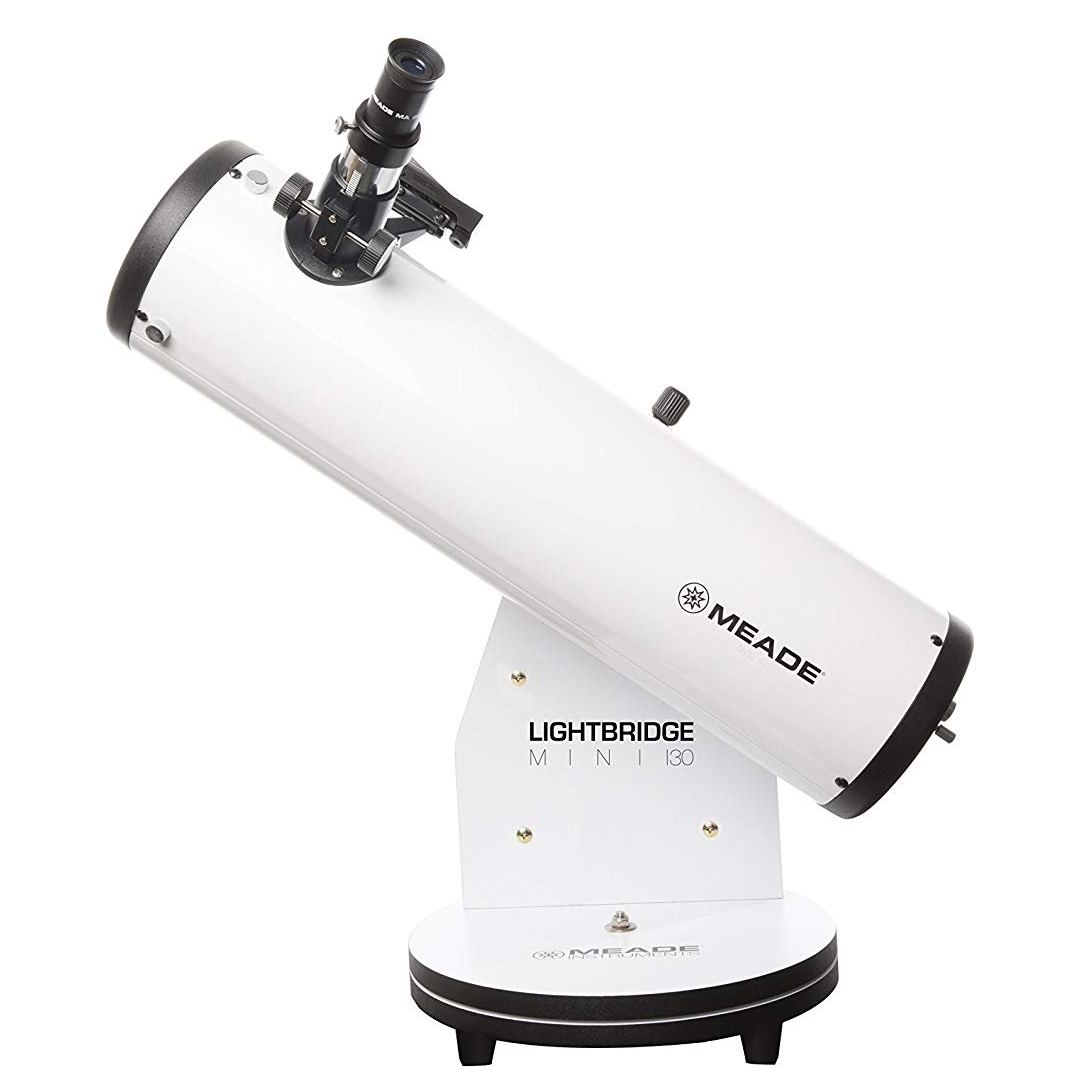 In this review I’ll cover the pros, cons and the Mini 130’s features to ultimately help you decide on whether the system is a system is worth investing in or one that you should skip out on.

How Do The Meade Lightbridge Mini 130’s Optics Work?

If you don’t already know, telescopes are generally formed using one of 3 different optic types, which include a reflector, a refractor and compound optics.

All 3 of these optics also have their own sub variations, for example spherical and parabolic mirrors for reflectors, Achromatic and Apochromatic for refractors and Maksutov-cassegrain and Schmidt-Cassegrain for compound systems.

They all also have their pros and cons, some more than other so, in this section I’ll simply label the pros and cons of the optics found within the Lightbridge Mini 130.

As a whole though, reflector optics are very solid and arguably have the best optics for capturing details in outer space over the other 2 variations, which fall slightly short. If you want to check out the pros and cons of the other variations, you can click here to go to post we’ve written that covers the subject in a little more detail.

What Do The Meade Lightbridge Mini 130’s Specifications Mean?

The Lightbridge Mini 130’s specifications are actually very similar to its direct counterpart in the Zhumell Z130. The Mini 130 has an aperture of 130mm, a focal length of 650mm which results in a somewhat wide f/5  focal ratio.

These specs mean that the device will be able to reach a theoretical magnification of 250x (the use able amount will likely be closer to 200x) and the images through the viewfinder will be relatively wide too, which means the edges of view will suffer with some coma.

As foe what you’ll be able to see, Jupiter will come across in good detail near the upper end of the devices power, you’ll be able to see separation is Saturn’s rings near the top end of the scopes power, Uranus and Neptune will both barely visible but can be spotted and of course Mercury, Venus and Mars are easy to spot provided you attempt to locate them in the right conditions. .

Of course galaxies, nebulaes, star clusters and a fair few celestial objects within the messier catalogue can be seen through the Mini 130 too.

The Mini 130’s power is still fairly modest in the grand scheme of thing where some systems can be 14 inches plus in aperture but, as beginner grade device the power is more than sufficient for observers of space who are just starting out.

In regards to portability the Mini 130 is a very solid offering. It’s dimensions and weight are 31.1 x 31.1 x 66 cm by 6.17 kg and as it is a tabletop device, it’s size and weight are definitely very manageable. In fact portability is definitely the Mini 130’s strongest points in my opinion and would be one of the main reasons myself and many others would recommend it.

The accessories Included in the box are two eyepieces at 26mm (25x) and 9mm (72x), a red dot finderscope, instructions and Meade’s Autostar planetarium software.

The accessories themselves are decent but for the Mini 130’s price of roughly $200, plossl eyepieces are what should’ve been included in the box. That’s why I’d definitely recommend investing in better quality and more powerful eyepieces later down the line so you can get the most out of the Mini 130 (click here to learn about some great eyepieces to invest in).

As for the mount, it’s Vixen-style dovetail, once again, like the Lightbridge Mini 114 meaning it’s easy to place the tube on other mounts that aren’t a tabletop with the sliding dove tail design, allowing for it to be a lot easier to balance heavier eyepieces.

The single-arm mount should deliver free movement along both the azimuth and altitude axes and should be fairly easy to operate if you’re a beginner.

If you do decide to change the tabletop mount to something a little bit more conventional, the EQ1 or EQ3 mounts are some good options to look into

One little issue with the device is that the vixen style of it will make it a little awkward to align the red dot finderscope. Nevertheless, as a whole the mount used by the Mini 13p is pretty solid for the price.

On the other hand, if you want more options within the compact and portable side of things, click here to check out a list on some other solid portable and compact telescope offerings.

The Meade Lightbridge Mini 130 is a solid 5 inch device, is lightweight and relatively value packed for its pricetag. Of course its lackluster accessories and the basic reflector telescope cons may not make it the ideal system for you but, it’s definitely not a bad one either.

I would personally recommend getting the Zhumell Z130 if you’re looking at the 5 inch market or if you’re really willing to stretch the budget, the SkyQuest XT6 would be an amazing system to go for.

But, if you’re mostly after portability and can deal with a few of the systems minor shortcomings, the Mini 130 is a very solid telescope to go out and buy.