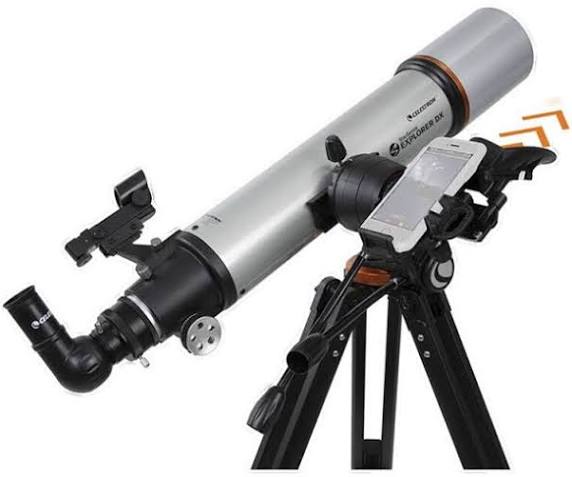 In this review I’ll cover the pros, cons and the 102AZ’s features to ultimately help you decide on whether the system is worth investing in or a beginner level device that you should skip out on. 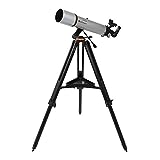 How Do The Celestron StarSense Explorer DX 102AZ’s Optics Work?

The StarSense Explorer utilises the oldest telescopic optics out of the 3 main categories currently around called refractor optics. The other 2 are known as reflector optics (it utilises mirrors as opposed to the glass lens used in refractor telescopes) and compound optics (they utilise a combination of the other 2 optics)

Refractor optics can be further broken down into achromatic and apochromatic, where the former and lesser quality of the 2 is used within the StarSense Explorer. That being said the main difference is only that the Apochromatic is better at focusing wavelengths of light resulting in fewer visual discrepancies occurring when viewing through it.

The pros of the lens included within the StarSense include the following :

Overall, even though the optics within this telescope aren’t necessarily the most accurate when it comes to colours, it will still provide a solid experience for most.

What Do The Celestron StarSense Explorer DX 102AZ’s Specifications Mean?

The StarSense has an Aperture of 102mm, a focal length of 650mm resulting in a focal ratio of just under f/6.5. These are very average specs and maybe even subpar when you consider reflector telescopes tend to offer a lot more bang for the buck nevertheless, the specs should be competent for beginners.

The mid level focal ratio is good as it’ll decrease the amount of chromatic aberration that can be seen, and the aperture means the max theoretical magnification of the device will be around 200x  although real world usage will be around 10 – 20% lower. 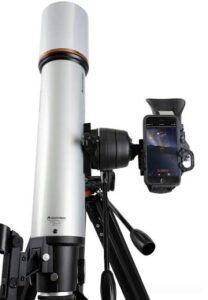 These are still decent entry level specs and will allow beginner level astronomers to see the following celestial objects provided enough of the StarSense’s power is used :

The tube isn’t too big coming in at around 81 cm whilst the tripod will allow the device to extend to 1.24 meters, which honestly isn’t that great.

As for the weight, when fully assembled it comes in at a very portable 6.44kg so you or anyone that’s even younger shouldn’t have too much of a problem moving it around or even storing it, whether it be at the home or for whenever you decide to take it to an area with minimal light pollution.

The device comes with 2 1.25″ kellner eyepieces at 25mm and 10mm, a StarPointe red dot finderscope, a 90 degree erect image starpointer, a Manual Alt-Azimuth mount, a StarSense Explorer phone dock, a tripod and a bunch of other miscellaneous documents.

The accessories provided are decent with the eyepieces being functional although of lower quality than Plossl eyepieces that a fair few telescopes in this price range tend to offer. The red dot finderscope is decent as are all of the other accessories too.

However, the mount does have a couple minor issues. Firstly it’s height might be a bit of a problem and secondly, the adjustment of the mount being quite stiff will make it a bit of pain to smoothly turn the Explorer.

The reason why this is a problem is because simply adjusting the axis to allow for a more smooth motion may take anywhere from 30 minutes to an hour to do.

This is probably one of the main reasons why you’d consider getting the StarSense Explorer especially considering there are other similarly priced systems that offer a lot more bang for the buck (I’ll list a few alternatives later). Nevertheless, the purpose for this software is to provide convenience for beginner level astronomers so, I’ll explain how it works here.

How this StarSense technology works is actually very similar to what can be referred to as plate-solving. What this does is take a snapshot of the sky and from the image taken attempts to locate where you are by comparing the shot to star maps using specifically set algorithms. This is generally only used to locate a singular celestial object.

So, the technology in essence uses your phone to take occasional snapshots of the night sky to locate objects however, as phones can’t really sustain battery for long periods whilst taking images, the snapshots aren’t taken all the time. The plate-solving is only done when you first mount your phone or when you move the telescope a significant amount.

Ultimately, due to the somewhat inferior nature of the phones used (at least when compared to a GoTo Computerised Mount) the field of view will only be limited to a max of 0.25 degrees (half the width of the moon). However, due to how simple and easy it is to use as result of the app, it’s not a bad comprise despite being less accurate.

As for what the app provides, they have database of a few hundred celestial objects so not bad for a beginner getting involved with this hobby.

What Are Users Of The Celestron StarSense Explorer DX 102AZ Saying

Users of the Explorer have found it to be a very capable device and quite easy to set up. The refractive nature of the optics means collimation wasn’t necessary a problem and the starsense app allowed users to get stuck in quite quickly. 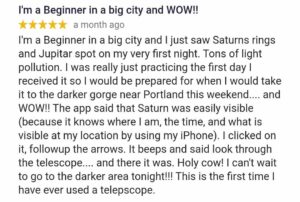 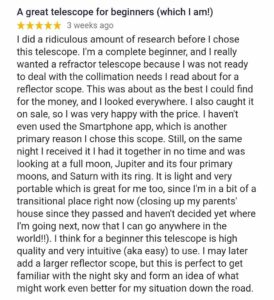 The only major complaint was to do with the inaccuracy of the apps tracking ability, especially when users decided to look further out. 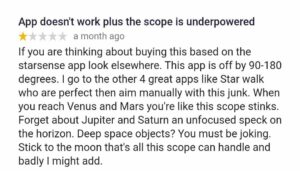 In that regard you can’t completely be reliant on the app, which may or may not be reasonably accurate considering the quality of your phones camera nevertheless, this shouldn’t be a deal breaker if you were to decide on this telescope.

If you’re interested in other refractor systems, maybe due to the slightly inferior light gathering abilities of the 102AZ, this list may be helpful.

If on the other hand you’re willing to spend a bit more for telescope that are more powerful but will require a bit more tinkering, the SkyWatcher Dobsonian 6-inch or the skyquest XT6 is most certainly worth looking into too.

Overall The StarSense Explorer 102AZ is very competent refractor telescope, that’s potable, easy to set up, has solid optics and decent enough in box accessories for the price.

The only shortcoming I guess you could say is it’s average specs and it’s Starsense technology being somewhat hit or miss however, from the research I’ve done on it, the 102AZ is a device worth checking even if it’s a little more expensive than an equally powerful reflector system.