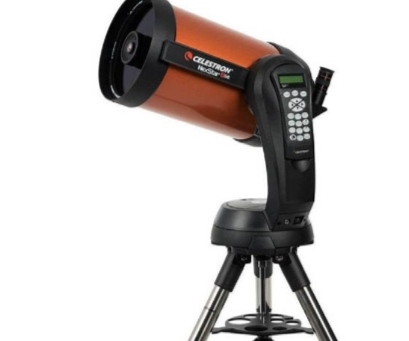 If you’ve found yourself on this review, there’s a good chance that the Nexstar 8SE is a device you’ve been hearing really good things about however, you also don’t want to jump head first into buying it without learning a few things about it right?

If that’s the case, it’s a good thing you’re here.

This is because we’ll be discussing the pros, cons, features and other elements about the system to decide if the Celestron Nexstar 8SE is a worthy beginner/intermediate level computerised telescope or one that you should simply skip.

How Do The Celestron Nexstar 8SE’s Optics Work?

The Celestron Nexstar 8SE is part of the mid level Nexstar line up that Celestron offers, with the other 2 levels being the low tier SLT line up and the upper tier evolution line.

Both forms of cassegrain optics have their pros and cons with the maksutov-cassegrain being slightly better for planetary viewing due to their narrower focal ratios and the Schmidt-Cassegrain being better engineered and more effecient when starting up with the aim achieving the optimal temperatures for use.

Now in regards to how the SCT optics compares to the other core optical structures in the refractor and reflector variants, as the SCT design is basically a hybrid of both forms, it essentially takes the best part of both optical variations with the aim  to provide a more balanced viewing experience overall.

The pros of Nexstar 8SE’s SCT optics include :

As for the cons, they include the following

As I a whole I’d say that the Nexstar 8SE’s optics are very good and shouldn’t let you down as long as you’re happy with the size of the mirrors within the tube.

What Do The Celestron Nexstar 8SE’s Specifications Mean?

The 8SE’s specifications include a 203.2mm aperture, a focal length of 2032mm which results in a fairly narrow focal ratio of f/10.

What this means is that the images you’ll see through the eyepiece will be narrower, making its pretty solid system for viewing planets.

In terms of the maximum theoretical magnification of the device, it comes in at a very powerful 480x meaning you should be able to see more or less everything within our solar system, provided you’re able to get up to higher magnification levels.

A brief list of what you’ll be able to see through the powerful optics found within 8SE include the following :

In terms of its weight and size, considering the size of the lens used within the tube, I’d say that it’s quite reasonable even if some individuals may struggle to move it around super comfortably.

It weighs in at roughly 15kg and stands between 96.52cm – 142.24cm with the tripod adjusted of course so, it should prove to be pretty comfortable to view through for most users.

The whole system can also be split into multiple parts too which should make it fairly easy for most to move it around it they would struggle with moving the whole device at once.

the accessories that come included in the box include a 1.25″ 25mm Eyepiece, a 1.25″ Star Diagonal, a Star Pointer Red Dot Finderscope, an Adjustable Steel Tripod, the SkyTM Level 1 Astronomy Software, NexRemote Telescope Control Software, a RS232 Cable, the Computerised Mount and Hand Control with over 40 000 Object Database among other manuals and documentation.

One of the 8SE’s major downsides is the fact you only get one eyepiece so out of the box the viewing experience will be very limited.

Therefore, it’s definitely a good idea to purchase an eyepiece that allows you to magnify further (check out this list going over some of our favourite options).

The included mount is essentially the same automated GoTo one provided with the Nexstar 6SE meaning it is susceptible to being a bit too small and in turn won’t be able to sustain heavy accessories.

It’s also altazimuth mount, which is a solid design as a whole but, it will be quite limited for any astrophotography activities as it isn’t quite as sturdy as an equitorial mount.

Although the mount isn’t as sturdy as an equitorial mount, Celestron’s Vibration Suppression Pads will smooth out most of the jiggles, which kind of a plus I guess.

As the mount is not rechargeable you will need to either use eight AA batteries or a 12-volt DC power supply, with the second option being what I recommend you do.

Nevertheless, I would still recommend you always have some batteries stocked up and placed within the 8SE because if the power supply was to die, that way you wouldn’t have to deal with the system shutting and you having to realign and reboot everything again, which can be quite annoying.

As for the functionality of the GoTo Mount, you’ll be able to lock onto a database of aroun 40,000 objects, which is a lot but you should keep in mind that the majority of the objects found within are going to be uninteresting stars.

What Are Users Of The Celestron Nexstar 8SE’s Saying?

The thoughts on this device are for the most part positive however, some individuals have found it hard to focus the optics and the need to buy essential items like a power supply and better eyepieces, adding to the overall costs, is another minor issue users have had.

Nevertheless, if you’re able to deal with these costs and the slightly poor weight management of the mount as well, it’s definitely a premium telescope worth getting.

The Celestron Nexstar 8SE is a great premium device and if you were to buy it I’d say that you’d be getting your moneys worth however, this does not necessarily mean it’s for everyone and it certainly does have a couple downfalls, one of them being the mount.

One alternative I would suggest looking into is the upper nexstar line up in the Evolution collection, particularly the evolution 8 if you still want a powerful 8 inch device with a much better mount. Of course that device is fair bit more expensive though.

On the other hand if you’re open to getting a system that isn’t automated but with an equal amount of power along with a bunch of great accessories, the skywatcher dobsonian 8, the Zhumell Z8 and the SkyQuest XT8 are all great reflector based alternatives too.

The Celestron Nexstar 8SE is a great telescope and if you’re willing to invest that pretty hefty fee of $1.4k+ it may be worth it for you.

Of course the pretty much mandatory requirement in purchasing a dc power supply and better eyepieces will ultimately spike the cost up a fair bit however, if you’re seriously interested in the system and won’t doubt your decision afterwards, I’m certain that Celestron Nexstar 8SE won’t disappoint in the stargazing side of things.