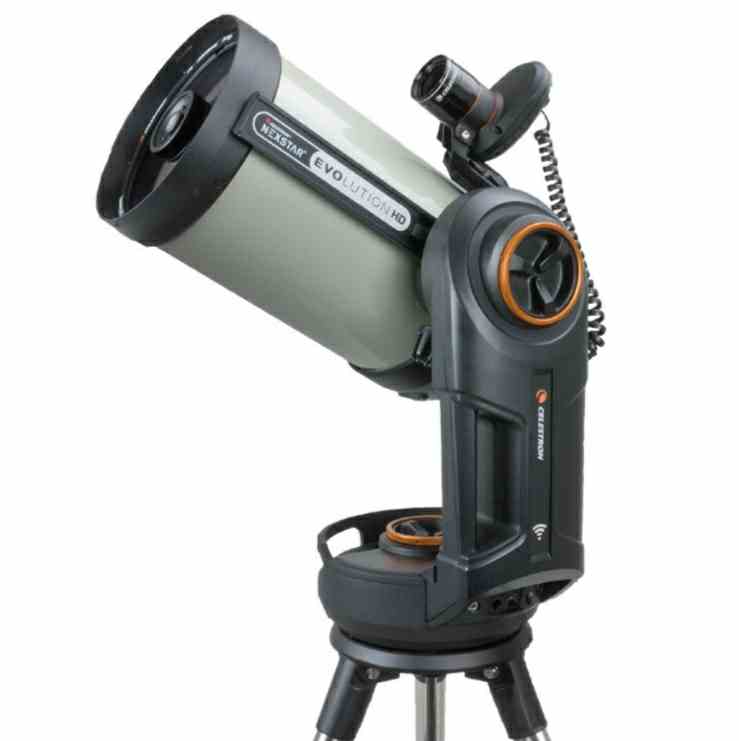 If you’ve found yourself on this review , you’re probably in the market for a high end GoTo computerized telescope and you’ve probably come across this particular telescope model a bunch of times right?

It’s a good thing that you’ve found yourself on this Celestron Nexstar Evolution 8 Review because at least now you won’t be buying this telescope fully blind, afterall even expensive devices can have its share of problems.

A Brief History On The Nexstar Line

I’ve previously reviewed the nexstar 6SE on this website and deemed it to be a pretty solid Schmidt-Cassegrain telescope despite a few technical issues but, the fact of the matter is that the nexstar SE is only the mid range line up from Celestron in their computerised telescopes line.

Celestron’s Nexstar line is actually pretty old being around since the 1990’s and these device were initially made to compete with Meade’s LX line for affordable and easy to use GoTo scopes.

However, in that time period Celestron wasn’t doing all that well which is why they were bought out by another corporation, which in turn transformed the trajectory of the nexstar line up entirely.

In this current day and age, there are 3 different areas that the Nexstar line operates in. The first is the entry level GoTo scope called the Nexstar SLT line which utilises a Newtonian refractor and Maksutov-Cassegrain design and generally aims to make the products affordable for consumers.

The mid range line is known as the Nexstar SE line which incorporate the Maksutov-Cassegrain and Schmidt-Cassegrain designs and pays homage to the orange tubed C8 that made celestron’s name pretty big back in the day.

Lastly the highest tier telescopes in the Nexstar lineup is the Nexstar Evolution line. This line came with a few really good game changing improvements such as better mechanics, including brass gears, a built-in rechargeable battery, and other more modern features like WiFi.

Of course nexstar evolution 8 is among the top of the line scopes that Celestron makes when it comes to the GoTo space.

What Are The Different Types Of Telescopes

Another thing that’s probably worth learning if you don’t already know is that there are 3 different variations of a telescope. A reflector, refractor and compound scopes.

All of them have their benefits and weaknesses but, out of all 3 the most balanced is the design of a compound system. This is the variant that the evolution 8 uses and it’s a good all rounded design allowing for good deep space viewing ability, negating for the most part chromatic aberration and allowing for a smaller footprint without too many diminishing returns in the power of the device.

The evolution 8 also uses the Schmidt-Cassegrain design which means that it will also be pretty decent at taking astrophotography images although do keep in mind that it isn’t primarily designed for astrophotography so the results aren’t designed to be the greatest.

What Do The Nexstar Evolution 8’s Specifications Mean

The Evolution’s specs are as follows, 203mm aperture lens, 2032mm focal length resulting in a focal ratio of f/10. The size of the telescopes lens means that you’ll be able to see a maximum theoretically useable magnification of 480x which means its got very solid hardware.

With these specs you should be more than capable of viewing a ton of star clusters, pretty much all planets within our solar system, constellations, galaxies and other celestial objects so, the device should be very solid for whatever your needs may be.

Of course the larger focal length is much more appropriate for planetary viewing over a wide field view of the galaxy but, this is an issue that you should be able to resolve by purchasing a eyepiece tailored for wide field viewing.  Do note that you will need to purchase an adapter for the wider field eyepieces which is a pretty annoying.

One major thing that a lot of people will complain about however, is the fact that for an 8 inch device, the evolution is severely overpriced. You’d be looking to pay in the region of $2k for this system, which won’t make a lot of sense for people to invest considering there are significantly cheaper 8 inch offerings in the market with very comparable specs.

What Accessories Will You Get In The Box

The accessories included in the evolution 8’s box includes a stainless steel tripod, 40mm Eyepiece, 13mm Eyepiece, starPointer, star Diagonal, telescope Hand controller and a single Fork Arm Altazimuth GoTo mount that has a rechargeable battery of up to 10 hours of runtime.

This rechargeable battery is primarily why the evolution is so much more expensive than the other 2 additions in the Nexstar line, that require you to carry around 12v batteries to charge up whenever it may be necessary.

Although with the SCT design the Evolution is capable of taking images, the mount set up on the other hand will make it a little tough to accomplish.

Nevertheless, the Mount itself is actually very advanced, of course it’s a GoTo system and rechargeable too which is a major plus. It has a fair few modern features such as it being easy to connect to WiFi, accessibility through an app and even being able to control the data base through their dedicated app.

Celestron have been making the Alt mounts for many years now and within this time they have more or perfected its function therefore, it shouldn’t come as a surprise when very well made GoTo mounts come with their telescopes.

With that being said, they’re also known for creating hit or miss SCT products so there’s always a chance this very expensive piece of kit may break on you. Then again considering you’re also given a fairly lengthy 2 year warranty, at the very least if it breaks within these 2 years through no fault of your own, Celestron should be able to assist you in getting it fixed.

If you want to check other alternative telescopes, for my list on computerised telescopes click here, if you’re more interested in the astrophotography side of things click here or if you’re just a beginner or looking to buy something that’s a lot more affordable to purchase than this expensive telescopes, click here.

All in all the evolution 8 is generally a liked system, other reviews I’ve seen haven’t got too many negative things to say about the system, users have said it is easy to use, the set up process is simple and of course the mount is often regarded as one of its best features and it comes with a bunch of useful accessories such as the eyepieces and tripod too.

However, as I’ve said above it’s very expensive considering the specs it offers and Celestron are known for having manufacturing issues (this is something I mentioned in my nexstar 6se review) nevertheless, the evolution 8 is a great device and assuming you don’t get a dodgy system, it’s still a more than capable device.

==>Click Here For The Prices On The Nexstar Evolution 8!<==