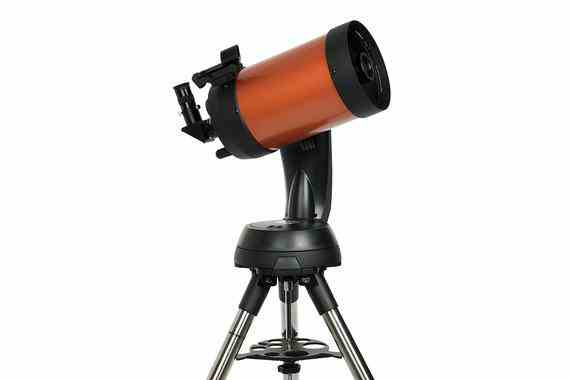 You’ve probably come across this telescope by celestron and have heard very good things about it right such as it’s GoTo full automated mount or it’s compact size and how the Nexstar 6SE is just an all round great telescope.

But, I’m sure you also didn’t want to jump to conclusions about it or buying it without any kind of research, which is why you’ve found yourself on this Celestron Nexstar 6SE review. In this review I’ll discuss a few things such as the pros and cons of the system, whether it be regarding it’s variations of the lens, practical usage scenarios, how easy it is to use and more.

*there are affiliate links on this page*

A Briefy History On The Nexstar Line

The Nexstar line is actually quite an old one being around since the 1990’s and was predominantly made to compete with Meade’s LX line for affordable and easy to use GoTo scopes. Celestron wasn’t doing all to great at that time so it was sold to another corporation and this telescope lineup morphed something completely different than was originally intended for it.

Now the lineup consists of 3 different areas, there is the entry level GoTo scope called the Nexstar SLT line which utilises a Newtonian refractor and Maksutov-Cassegrain design and generally aims to make the products affordable for consumers.

The mid range line is known as the Nexstar SE line (this is where the 6SE falls under) which incorporate the Maksutov-Cassegrain and Schmidt-Cassegrain and pays homage to the orange tubed C8 that made celestron’s name back in the day.

Lastly the highest tier telescopes in the Nexstar lineup is the Nexstar Evolution line. This line came wiith a few really good game changing improvements such as better mechanics, including brass gears, a built-in rechargeable battery, and other more modern features like WiFi.

It’s safe to say that the nexstar line is a pretty well established one in the GoTo mount scene.

What Type Of Telescope Is The Nexstar 6SE

If you don’t already know there are 3 different types of telescopes available on the market, with their pros and cons, namely a refractor, a reflector and compund telescopes. The Nexstar falls into the latter category of a compund or otherwise known as a catadioptric telescope.

The general benefits to such a telescope design is that it basically cancels our the issues that refractor and reflector scope may have such as chromatic aberration, constant maintenance due to the exposed optics and collimation issues.

A compound telescope also tends to be more compact too, mainly because the light is folded in the tube meaning you don’t really lose any focal length despite having a smaller frame.

Of course because the light is folded, the amount of light the scope can gather won’t be as great as the others but, that’s just a minor compromise to make for the benefits you receive.

The Nexstar 6SE also utilises a Schmidt-Cassegrain (SC) design meaning it’ll also be pretty solid at deep space photography (although not to the level of scopes designed for it specifically).

What Do The Specifications Mean

The 6SE’s specs includes an aperture of 150mm, a focal length of 1500mm which results in a focal ratio of f/10 which is actually a very typical of SC scopes but, in short their fairly good specs.

However, Celestron tend to make some of the best SC based telescopes on the market therefore the optical performance from the 6SE will be very solid. Through it you’ll be able to see Jupiter, Saturn, Mars, and of course the Moon in very solid details. In fact some of these entities may still be visible in light polluted areas.

However, in order to catch a glimpse of a few nebula like Swan nebulae, the messier catalogue, hercules star clusters and galaxies, you will need to observe where light pollution is kept to the minimum.

As for what the specs mean for practical usage, with the 150mm lens, you’ll be able to achieve a maximum magnification of 295x with the right eyepieces so, even observing fairly detailed views of Jupiter or Saturn will be very achievable.

What Accessories Are Included In The Box

In the box you’ll be provided with a 1.25” Diagonal and 25 mm eyepiece and Celestron’s Star Pointer, which is a zero-power red-dot-style finderscope and of course the fully automated and motorised GoTo mount. The mount also comes with a  database of over 40,000 celestial objects.

This means that if you want to locate a specific object such as maybe the andromeda galaxy or Jupiter, you can just put that into the system and it should automatically point to whatever deep space object you want to see.

So for the most part it’s a solid mount however, the mounts that are used by 6SE and the other lower to mid range scopes from celestron tend to breakdown more regularly than most would like. This is mostly a manufacturing issue but, it’s certainly something that you should be concerned about.

This issue will become more prevalent for individuals who use the telescope a lot. Due to the awkward weight distribution of the mount, it’s maximum capacity is at around 12lb (5.5kg) and with the tube itself weighing 8lb (3.5kg), this only allows for 4lbs of spare weight to account for the other accessories such as a finder scope eyepiece etc you’ll be using with the scope.

If you’re planning on maxing out your telescope usage, it’s quite likely you’ll be investing on heavier eypeiecs or even using a DSLR camera with it if you’re planning to do astrophotography.

It’s at this point when you should start getting worried about the mount breaking down and if it does breakdown, you’ll need to invest a helluva lot fix it.

The other major cause for a breakdown is to do with the electronics, where the plugs only fit loosely into the scope. If the contact with the plug and the pin isn’t solid, the plug will fall out.

Everytime this happens, the alignment could mess up and that’s not what you want to happening on a regular basis. So if this happens on regularly, the 6SE’s mount will become useless overtime

On top of that the 6SE also isn’t capable of manual usage meaning if the mount dies, the 6SE will just become another useless accessory.

Nevertheless, I’ve not seen many complaints on this matter from customer reviews and if you’re not going to be constantly using it, you shouldn’t experience many issues at all with the 6SE but, it’s definetly something you should be wary of.

The other concerns regarding the accesories are that 25mm eyepiece is a supbar piece and the finderscope is pretty bad too. You’ll probably want to look into upgrades if you decide to pick up this telescope.

The Nexstar 6SE appears to be a fairly easy to use scope, with it’s skyalign software collimating the lenses should be very easy, and the weight and size of the scope being at 9.53kg and  81.3 x 66 x 30.5 cm makes it a more than capable portable telescope, making it fairly easy to move around and find great terrain to observe space from.

Users of the scope have found it to be a pleasant experience. Of course as I mentioned above, the mount could be problematic and the fairly large price tag, subpar eyepieces and finderscope may be an issue for some but, all in all the 6SE is a very easy to system.

Other Alternatives To Look Into

If you’re interested in computerised scopes but don’t find the Nexstar to be your cup of tea, you can check out this list I comprised on GoTo and computerised telescopes.

The Nexstar 6SE is a solid telescope despite it’s low quality accesories and a mount that could be problematic in long term use.

It’s not quite an entry level telescope and it even edges on the too expensive side for midrange level specifications however, the GoTo computerised aspect of the scope and the compact and lightweight design does make it a very appealing device to consider if you’re planning on getting into a computerised system.

If there’s anything else you’d like to add to this review, maybe a positive or negative experience with the Nexstar 6SE if you own it, please do leave a comment down below!