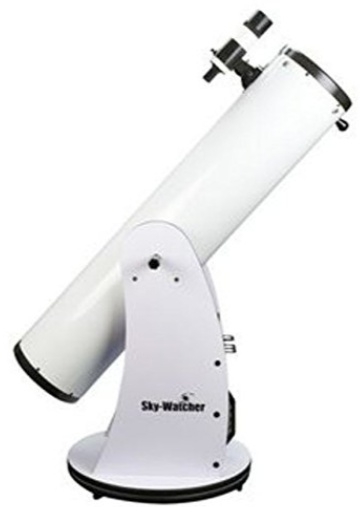 If you’re in the market for a solid telescope that’s got good power but doesn’t completely break your bank, a system like the SkyWatcher Traditional 8 inch Dobsonian, I’m sure, is something you’ve definetly come across as an option right?

An 8 inch scope is something I find to be in the upper entry level to interdimate power for amateur astronomers so it’s a area you should look into before going all in on more expensive alternatives.

In this SkyWatcher 8″ Traditional Dobsonian review, I’ll go over the good, the bad and whether or not it’s worth your hard earned money to buy it.

What Type Of Telescope Is It?

Telescopes have 3 different variation to them, in terms of how their mechanisms work. These designs are a reflector, refractor and compound scopes and all of them have their pros and cons some with more cons than others.

In this case the Sky-Watcher 8″ uses a reflector based design which means that there aren’t going to be any major problems with chromatic aberrations or certain high frequency lights not being able to pass through the lens.

The primary mirror used by the scope is a paraboloidal primary mirror which aims to reduce spherical aberration whilst the secondary mirror is supported by some mirror brackets to deal with the diffraction spikes that reflective scopes tend to suffer with.

The biggest issue most people will have with the reflective design of the SkyWatcher 8″ is likely to be the high maintenance that is inevitable when it comes to reflective scopes due to the optics being exposed. Nevertheless, all in all this variation provides a lot more detail, at least when it comes to faint objects when compared to a refractor scope.

Compound scopes are the best of both worlds where the benefits of refractor and reflector are essentially put into one but, they also tend to be more expensive. Reflectors on the other hand are cheaper to manufacturer which is why the SkyWatcher 8″ is actually reasonably priced being only $400 – $500 for it.

What Do The Specifications Mean?

The specs for the device are a 203mm aperture, 1200mm focal length which translates to a f/5.9 focal ratio. What this mean is that the scope will have is a fairly powerful system where you’ll be able to see the moon in very good detail as well as view star clusters, Jupiter, nebulaes and at mesmerzing quality.

Neptune should be visible and theoretically Uranus’ moon as well but, this is only in theory, Uranus’ moon in practicality will be hard to spot through the 203mm lens.

As for objects outside of our solar system, there’s quite a lot you can see with the 8″ lens. You’ll be able to see the whole of the Messier catalog, some galaxies will be tough to see such as M74 and M83 due to light pollution, you’ll be able see global star clusters such as the M2, M3, M5 and a bunch of other celestial entities.

The bottom line here is that the specs a very solid allowing you to observe many elements of the universe but, there are obvious set backs such as not the limited size of the lens which means less detail than bigger telescopes. Nevertheless, at its price point, the skywatcher 8″ is a very good one device to go for.

What Are The Accessories Included In The Box

The mount is a Dobsonian one manufactured in China so the quality isn’t the greatest, at least not to the level of higher quality mounts such as Orion’s XT Dobsonians. The SkyWatcher’s mount is made of melamine-covered particle board which is basically sawdust compressed with glue.

The altitude bearings of the mount sit on brackets inside the rocker sides. This means that if you want a rocker with a more durable plywood rocker, the process of creating one will be kind of a pain.

The altitude tensioning is on the sides, basically near the rocket handles, which can be a problem as your clothes may caught on them here and there.

The mount in general is a smooth operator but, it definitely can be improved by replacing a few of thing such as the cheap nylon pads and nailing a sheet of Formica onto the azimuth board.

All in all the system for the price you’re paying for it, is very solid a great buy minus the lesser quality of the mount and the lack of any tracking software due to it not being computerised.

When you get the package, it’s highly likely that you’ll receive it in 2 boxes so the initial startup may be a little annoying. But once you get the packages, according to buyers of the scope, it does come mostly assembled so it shouldn’t be too much of hassle to start up.

The size and weight of the scope could be problem for some but, it doesn’t appear to much of a problem for most users. Of course if you’re planning to travel with this 8″ telescope, at dimensions of 124.5 x 68.6 x 45.7 cm and weighing in at 15.1 kg, it’s definitely not the smallest of scopes you could get your hands so doing so won’t be too great an experience. (look into my best compact scopes if that’s your deciding feature).

The eyepieces included in the box don’t appear to be that great either, with the 25mm one being blurry whilst the included finderscope is decent but, likely will cause a few problems when collimating. However, even with these problems it does seem as if most customers had a pleasant time using the SkyWatcher 8″ and recommend it as a great beginner telescope.

Other Telescopes Worth Looking Into

If you’re not interested in this scope per say or want to look at other telescopes before taking the plunge and buying it for yourself or loved ones, you can check out the list I comprised on the best telescopes for amateur astronomers.

Hopefully this review helped you in making a decision and if not, I hope that one of the alternatives provided in the lists may be worth to your liking.

The SkyWatcher appears to be a very beginner and cost efficient 8″ scope and doesn’t seem to suffer all too many set backs according to users from amazon and from other reviewers of the product in general.

So it’s a device that is recommended and one that you should consider picking if you’re after a good deal.

If you have anything else to add to this review of the SkyWatcher 8 inch telescope, feel free to leave it in the comments below!