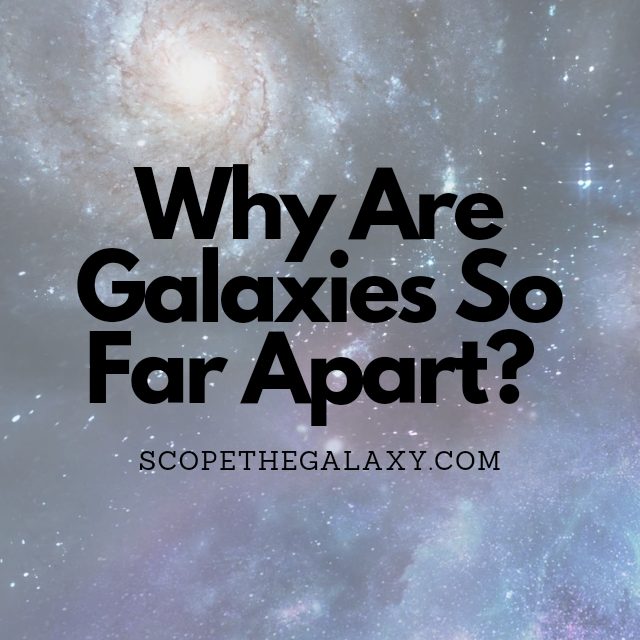 Space, time, and distance are far more complicated than we imagine unless, of course, you’re a scientist who makes these calculations and understandings a part of their daily life. Suffice it to say, the Big Bang has more secrets behind its inception than even the greatest minds can fathom.

The reason that the galaxies are so far apart is that the distance that separates them is constantly expanding. The rubber band analogy is an apt choice. If you draw dots on a rubber band and then stretch the band, the dots appear to draw away from each other.

The reality is, that the dots are still very much in the same place, but the space between them is expanding and from our perspective, these galaxies are flying away from each other.

Are Galaxies Moving Farther from Each Other Every Day?

The energy from the Big Bang is still active and yes, it would be more accurate to say that the space between galaxies is expanding every day, which means that galaxies are farther apart from each other every day.

It is believed that there are galaxies out there that are so far away that no one living will ever see their light. Galaxies themselves are what we call “bound systems,” which means that the objects within each galaxy are not moving farther apart from one another.

The fact there are a hundred billion galaxies out there, all bound within and of themselves, is kind of mind-boggling.

Why is the Farthest Galaxy the Fastest Moving?

Since the space between galaxies is ever-expanding, and galaxies themselves are moving at relatively slow speeds, it appears that the farther away a galaxy is, the faster it is moving away from us.

However, this is a matter of perception Going back to the rubber band example, the farthest dot from the beginning appears to be moving away from the start much faster than the rest.

Hubble’s Law is the framework around which we understand galaxies, how fast they move, and why the galaxies that are the farthest away from us seem to be moving away at a faster speed than the closer galaxies.

Without Edwin Hubble’s paper, written in 1929, we might have a far less advanced understanding of how galaxies move through the cosmos.  Hubble presented the evidence for the expanding universe and he did so by showing that it was an observational discovery.

The formula that he presented to calculate the linear relation between velocity and distance (as it pertains to the galaxies) is commonly found in science books today, from the grade school level through college.

Are Galaxies Moving Away from Us?

Most galaxies are moving away from us but not quite all of them. Currently, Messier 90 is a galaxy that is roughly 60 million miles away from the Milky Way galaxy and approaching.

This is called “blueshift,” meaning that shorter wavelengths of light (light scientists use to determine not only the speeds of galaxies but where they are traveling in relation to ours) appear as blue and indicate that a galaxy is moving towards us.

The inverse is called “redshift” because the long wavelengths of light appear as red and it indicates that objects are moving away from our galaxy, which is true, for the most part, when it comes to most galaxies.

Are Some Galaxies Moving Towards Us?

With over 150 billion galaxies out there (that we know of at least) it stands to reason that some galaxies may be moving towards us, rather than all of them moving away.

As it happens, some galaxies are moving towards us, like Andromeda galaxy or the other previously mentioned Messier 90 galaxy too.

According to astronomers, there are roughly 100 galaxies that are doing this and is most commonly referred to as“blueshift. Several exist in what we call our “Local Group” and though they are moving towards us, we are all locked gravitationally.

There is also the Virgo Cluster, containing three galaxies that are “blueshifts,” and are moving towards us. These three galaxies are M90, M86, and M98.

Why is the Andromeda Galaxy Moving Towards Us?

The Andromeda galaxy is speeding towards us at roughly 110km per second, which seems like it’ll be at our doorsteps in no time however, in reality at the current rate, it will be about 4 billion years before the Milky Way and Andromeda would ever get the opportunity to collide with each other.

Fortunately, since stars and planets are spread so far apart, it won’t matter when the two galaxies come together as it’s unlikely many will ever run into each other.

So it’s something that our successors will have to deal with, assuming that anyone is still alive or that there is planet earth in 4 billion years. And “deal with” is taking it a bit far, since the collision won’t be a collision at all.

If the human species is still kicking in 4 billion years, they will either have come up with the protective technology necessary to avoid planetary collisions or they will have returned to the stone age. Either way, it’s out of our hands.

Even though galaxies are said to be moving away from us, it’s more like the space between is stretching or expanding, and the distances between the galaxies become vaster over time. At least that’s the case for most of the 150 billion galaxies out there.