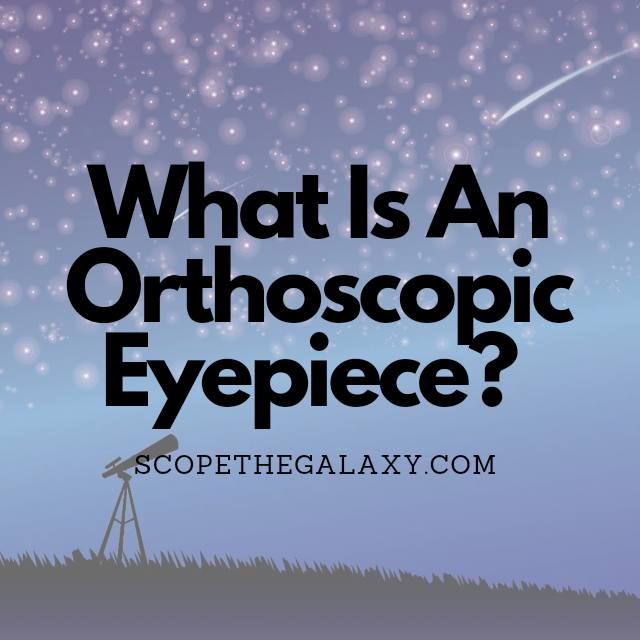 The orthoscopic eyepiece has been around for quite some time, as it was originally patented in 1880 by Ernst Abbe. It’s not the “go-to” choice amongst eyepieces anymore, either with microscopes or telescopes, however, it’s been on a sort of “come-back” role in recent years.

An orthoscopic eyepiece is a lens that is used primarily in microscopes and telescopes. It magnifies an image and the lens is always closest to the eye of the observer. This amounts to a short eye relief, which is a chief complaint amongst some.

The Plossl eyepiece has largely usurped the high pedestal upon which the orthoscopic eyepiece rested for so long and it is considered to be inferior to some of the eyepieces on offer today. Fortunately, it’s far from dead and there are a lot of modern adopters of the technology.

How Does An Orthoscopic Eyepiece Work? 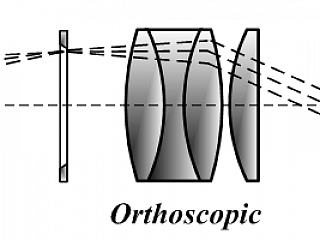 When it comes to reflectors, the eyepiece is the only available lens. In refractors, it is the second lens. An orthoscopic eyepiece contains a four-element optical system with a 40˚ to 45˚ FoV (Field of View).

Fortunately, orthoscopic eyepieces are relatively inexpensive and they’re a good option for amateur skygazers who want to dip their toes in the water before taking the full plunge.

Orthoscopic eyepieces have good eye relief as well. Despite the push for other eyepieces, such as the more equivalent Plossi, and the more expensive Kellner’s, Huygens, and Erfles, Orthoscopic features are seemingly enjoying a moment of rediscovery.

The fact that they offer such pinpoint clarity for a low price is certainly a large part of this new wave of enthusiasm. That’s not to mention the fact that it is probably one of the best eyepieces for viewing the inner planets up close.

Who Created The Orthoscopic Eyepiece?

Ernst Abbe was a German Physicist and the Optical Scientist who conjured the first orthoscopic lens into the world. While he was at it, he also produced the world’s first apochromatic lens, so he was certainly a busy man throughout his early years, all the way up until his death in January of 1905.

When you’re referring to scientists from the past, it’s easy to gloss over their overall accomplishments and that is the case here. The truth is, Ernst Abbe was a phenomenal mind and had an indelible impact on science then and now.

His achievements in the genre of optics simply can’t be emphasized enough and anytime that you place an orthoscopic eyepiece in your microscope or telescope, you can’t thank Ernst Abbe, who has been gone from this earth for well over a century now.

In fact, the orthoscopic lens also goes by another name, if not as well known. The “Abbe” is what it is called in knowing circles. Whether orthoscopic, orthographic, or just plain old Abbe, it’s a phenomenal eyepiece all the same.

Pros Of An Orthoscopic Eyepiece

There are several pros that come with an orthoscopic eyepiece, with the cheap price being only a minor advantage.

The orthoscopic eyepiece has a triplet lens and a singlet lens, with the singlet placed nearest to the eye. Although the FoV is a bit narrow, especially when compared to some of the other eyepieces available, you don’t have to worry about aberrations and distortions.

That includes geometric distortion, which is a prevailing problem in other lenses but not in orthoscopic. It has a short eye relief but it is still a comfortable one and it is surprisingly clear at higher magnifications.

It might not give you the kind of view that you’re looking for when it comes to Neptune and Uranus, or beyond our solar system, however, it retains a high level of clarity even at high magnifications, which is excellent for close-up and personal views of the moon and the inner planets.

Cons Of An Orthoscopic Eyepiece?

The most prevalent and loudest complaint about orthoscopic eyepieces is the narrow FoV. It’s an unfortunate aspect of a relatively high-quality lens.

This is especially true when you see genuine clarity at higher magnifications. So, it’s understandable that there are those who swear off these eyepieces because of the frustratingly narrow view.

There aren’t a ton of complaints about orthoscopic lenses and if you spend a lot of time in the stargazer forums, you will find that the eye relief is incredibly irritating for those with glasses.

Also, there are a lot of complaints when it comes to the field of view as well. Fortunately, these are pretty much the limit of the complaints concerning this lens. You will find just as many and more, all over the map as well, when other eyepieces are discussed.

The thing is, all eyepieces have their flaws, which is something that both amateur and expert stargazers alike learn to either live with or find a way to loop around with a supplemental or accommodating technology.

All-in-all, the orthoscopic lens is considered to be one of the best lenses available for inner planet viewing. The field of view can be overcome when looking at close objects in the cosmos and, as far as those with glasses go, maybe another type of lens, with a longer eye relief would be the better way to go.

An orthoscopic eyepiece consists of a triplet and singlet lens that provides the viewer with an exceptional view even at high magnification. It is also excellent in terms of having very little in the way of aberrations or distortions.

It is a great lens for beginner astronomers and a reliable one, with plenty of longevity and durability.

Back to the Future?